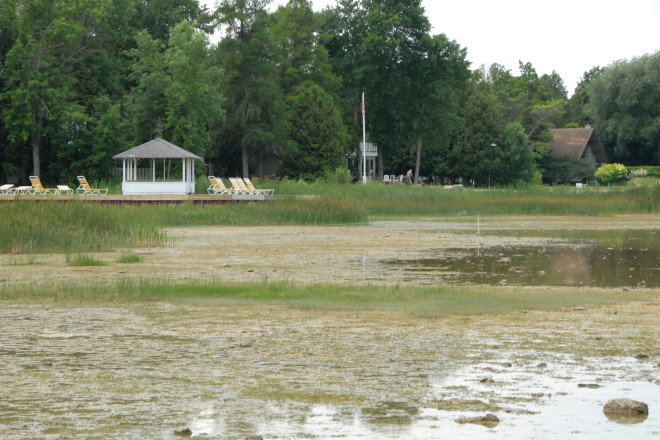 When a group of Republican legislators decided to restore “private property rights” by inserting one-size-fits-all changes to shoreland zoning regulations by including those changes in the state’s biennial budget last summer, they failed to take into account a passionate group of people in lakes organizations and county planning departments who have worked hard to create local, sustainable shoreland zoning rules that are now pre-empted by the changes.

Door County will likely be adding its name to the list of those that have asked for repeal of the shoreland zoning changes that were inserted into the state biennial budget last summer and took effect on July 14.

Mariah Goode, head of the county Planning Dept., told members of the county’s Resource Planning Committee at a recent meeting that most of those resolutions are relatively generic, so she came up with a resolution pointing out the problems with the sweeping changes, including:

“If you look what we’re asking for, we’re asking them either for repeal of what they put in the budget bill, or alternatively, get rid of the part that disallows the county from doing more than NR 115,” Goode said.

“We’re all on board with addressing this in some form,” said RPC Chair Ken Fisher, but the committee decided to wait for Corporation Counsel Grant Thomas to weigh in on the resolution before the committee forwards it to the full county board.

Dan Bahr, government affairs associate of the Wisconsin Counties Association, said the WCA is working on a “cleanup bill with some of the proponents of the policy, sort of a compromise situation.”

“It’s our conclusion legislatively that a full repeal of shoreland zoning in Act 55 [the budget bill] is very unlikely,” Bahr said. “So what we’re trying to do is find some common ground with some of the proponents that will allow some flexibility for counties.”

While Bahr said the details are still being worked out, the cleanup bill will address setback issues, nonconforming structures and height restrictions.

“We don’t touch on everything,” he said. “It was sort of a broad sweep, but I think it will help balance it out a little bit.”

Former Republican state senator and senate majority leader Mary Panzer, now a lobbyist operating Panzer Public Affairs Consulting, has gotten involved in doing something about the changes to “50 years of lake law that was altered at kind of a whim in the budget.”

“There was a group of lakes up north in Vilas County that I have gone to for years. They called me and wanted to know if I would get involved because they were quite upset. I have a certain passion about this, which is why I agreed to take it on,” she said. “We’re ready to go and really fight it out. Our water resources are one of our best assets, next to our people in the state, and they should be protected in a way that helps everybody. That’s why we have the laws that we do. As I like to tell my former colleagues, there isn’t a little shoebox you can put lake law into because they are all different. That was the intent of the law.”

Like Bahr of the WCA, Panzer said there is little hope for a full repeal of the shoreland zoning changes, but she is optimistic that the compromise bill will be given legislative hearings.

“I think this is important to people,” she said. “I think they’re going to pass something. Will it be everything? I wish it would. I don’t know.”

Once the bill is drafted, Panzer said she will be visiting legislators, hitting editorial boards and educating people about what happened with these sweeping changes inserted in the budget bill.

“It was a decision not to have a state classification of lakes and let that be done locally,” Panzer said. “This just flips that around and it flips it around without people really knowing or understanding. To be honest, there are a lot of people who still don’t understand.”

Panzer suggested that even the legislators who introduced the shoreland zoning changes didn’t realize the scope of those changes.

“The people that wrote the changes in the budget come from small lakes [Sen. Tom Tiffany of Hazelhurst and Rep. Adam Jarchow of Balsam Lake; both were contacted for this story but neither responded], and they’re not at all conversant about some of the complexities involved with the Great Lakes,” she said.

Some good has come out of all this, Panzer said, in the form of a group that was incorporated in October, the Wisconsin Shoreland Initiative. Its membership includes close to 50 lake and property owners associations and the Northwest Area Wisconsin Land and Water Conservation Association, representing land and water departments of 11 northwest Wisconsin counties.

“The group is forming and rapidly expanding to encompass all lakes around the state,” Panzer said. “It’s just a group of people that care about lakes and shorelands. People don’t want to see this happen again.”

Learn more about the new group at wisconsinshoreland.org.