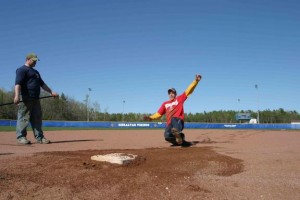 Gibraltar High School re-dedicated Billerbeck Field to its namesake, Rod “Chief” Billerbeck, Thursday, May 15 in a pre-game ceremony. Billerbeck coached the team for nearly three decades and led the Vikings to 17 conference championships, as well as the school’s only team sport state championship in 1979. The field has been upgraded this year thanks to donations facilitated by the Gibraltar Booster Club, which have improved the playing field, added a press box, foul polls, and banners on the outfield wall welcoming visitors to Billerbeck Field, as well as recognizing the team’s conference titles and state championship.