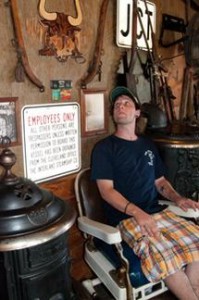 Many people know the game as “ring toss.” The real name of the game, however, is Bimini, and it arrived at the Blue Ox 35 years ago.

It was a gift to owners and brothers Joe and Jerry Kwaterski from their friend Tom Gordon. He had recently returned from vacation on the island of Bimini, located in the westernmost district of the Bahamas. He discovered the game there, thought it would be perfect for the bar, and brought Bimini home.

The Kwaterski’s have owned the Ox for 36 years, and Bimini has been with them for all but one. A family owned establishment, most often The Blue Ox is family operated as well. Jerry Kwaterski’s son, Shane, along with Joe’s son, Dylan, not only bartend there, they also play a mean game of Bimini.

To play the game, set up how many shots each person wants to do. Then play the best out of five, ten, or fifteen shots depending on how good you are at the game, or how long you want to play.

“Some people shoot from the barber chair underneath [the game] and swing the ring out and hook it that way,” Jerry Kwaterski said. “My son Shane plays that way. It’s more competitive.”

“It’s probably one of our signature things, besides the Blue Ox Burger. People come to play [Bimini],” Jerry Kwaterski says.