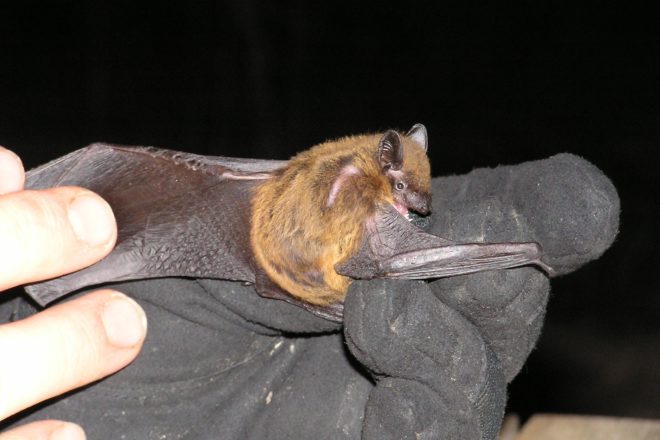 After a decade of bad news about bats dying from white-nose syndrome, Wisconsin bat researchers have literally caught some good news.

While searching Avon Bottoms State Wildlife Area in Rock County to learn more about the summer habitats of bat species vulnerable to white-nose syndrome, they caught in their nets an evening bat, a new bat species that had never before been reported in Wisconsin.

“It was pretty cool to find a maternity colony of evening bats,” says Heather Kaarakka, one of the DNR bat researchers. “It’s never been recorded before in Wisconsin and it’s a pretty under-studied species generally.”

The edge of evening bats’ historic range has been close to the Wisconsin-Illinois border, so it’s not terribly surprising that the species was found here, she says. “It means they are possibly slowing moving north.”

And that’s good news because evening bats are not believed to be susceptible to white-nose syndrome. They do not hibernate in caves but fly south to Florida in the winter and then return north in the spring. Only the females move north and roost in tree cavities. They are insectivorous, eating beetles with their strong jaws and consuming agricultural pests like root worm and cucumber beetle.

Kaarakka was hopeful they would find more evening bats after catching a juvenile evening bat in their net in summer 2015 at Avon Bottoms. At first they thought they had caught a big brown bat, a common species in Wisconsin, but knew something wasn’t quite right and they noticed a burnt orange smell as they handled the bat.

They suspected what they had was an evening bat, took some photos, made some common measurements of the bat, and let it go. They shared their information and photos with other bat biologists, confirmed it was an evening bat, and resolved to look for the species in 2016 when they revisited the site. Because the bat was a juvenile and had been found within five miles of the Illinois-Wisconsin border, it could have been a bat born in Illinois that flew into Wisconsin accidentally.

“Now we can say it wasn’t an accidental find. We found female bats and followed them back to sizeable colonies,” White says. “It is a really big deal.”

To learn more about Wisconsin bats and sign up to receive updates about bat news in Wisconsin, visit dnr.wi.gov or wiatri.net/inventory/bats.