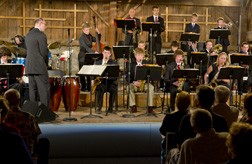 Birch Creek will host an encore screening of Jazz at Birch Creek, a program of Wisconsin Public Television (WPT) on June 21 at 7:30 pm in the Dutton Concert Barn at Birch Creek.

“Birch Creek was the pioneer of many planned WPT production opportunities to educate, inform and engage Wisconsin communities,” said WPT’s Director of Television James Steinbach. The culmination of planning led to a three-day residency for the actual filming of Jazz at Birch Creek in August 2011. WPT staff returned to Birch Creek January 30, 2012, to present the final product and previewed the film Jazz at Birch Creek. The production aired on WPT and was streamed on The Wisconsin Channel, as well as other public access channels, from Wisconsin to Rochester, New York, over the past several months.

This summer Birch Creek will present an encore viewing for visiting and local patrons who may have missed the original airing. WPT Producer, Deb Piper, will also be on hand to answer questions about the making of the film.

Jazz at Birch Creek has many local ties since several students from Wisconsin will be featured in the program.