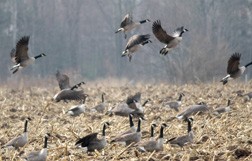 Little did I realize at the time that my first Christmas Bird Count (CBC), done in the Kewaunee area on Dec. 28, 1958, would be the beginning of some of the most exciting and memorable birdwatching and counting days of my life.

This past December marked my 54th consecutive year of doing the counts. Fortunately very good records were kept of all of the counts, and what’s especially fascinating now is to review and compare the results.

Interestingly, we failed to see or hear one American Crow in that first Kewaunee count. Today these creatures seem to be everywhere. We’ve been doing the Brussels area count for the past 15 years, and a new record of 893 Crows was set in 2010. The Sturgeon Bay count this year had fewer, 568, although last year’s (2010) Crow total was 870. Obviously these birds are able to find more food, and perhaps the somewhat milder winters in recent years helped to account for the steadily increasing wintering Crows.

The number of Tundra Swans observed on both the recent Brussels and Sturgeon Bay counts pleased the watchers. A new high of 227 was recorded mainly along the Sturgeon Ship Canal during our last Sturgeon Bay count. The Green Bay waters at Sand Bay on our southern count, for example, tallied 166 of these elegant white birds. Our friend Joe Carpenter, who lives near the mouth of the Mink River, rarely misses having a small number of Tundra Swans wintering there. Provide them with open shallow water, where they can dabble for submerged vegetation, and these tough creatures can survive extreme cold.

One of the most unusual birds we almost recorded in Jacksonport 31 years ago, a Ruby-throated Hummingbird, was seen for a few weeks up to and including Dec. 19, 1980 when I observed and photographed it coming to a hummingbird feeder at the home of Io Erskine. Yes, Mrs. Erskine had to frequently put a freshly filled unfrozen feeder out for the bird. Unfortunately the Hummingbird was nowhere to be seen the following day, Dec. 20, the day of our count. The temperature had nose-dived to below zero F, and apparently, the tiny creature didn’t make it through the night. I wrote several stories about the experience and, before I knew it, they appeared in a number of newspapers, virtually from the Atlantic to the Pacific. Had the bird appeared on the day of our count, a new Wisconsin CBC record would have occurred.

The only Catbird we’ve ever had on one of the counts was also seen in Jacksonport on Dec. 17, 2005. It has always amazed us to see several Golden-crowned Kinglets on nearly all of our counts, in mixed conifer woods. How these birds, second smallest in North America to the hummingbirds, survive the frigid winters has been a mystery until in recent years when the answer was discovered and proven by the famous Raven researcher and writer, Bernd Heinrich. (Read Heinrich’s book, Mind of the Raven.) The Kinglets survive by feasting on very tiny dormant caterpillars of one of the small Geometrid Moths, located by the birds in the crevices of tree bark. The caterpillars are usually referred to as “inch worms.” 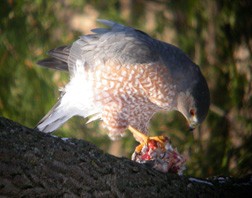 A Cooper’s Hawk eats a Mourning Dove during the Christmas Bird Count on Dec. 17, 2005. Photo by Roy Lukes.

Cedar and Bohemian Waxwings are always exciting to see, and to get close to as they feed, usually on the seeds of the fruits of ornamental crabapple trees or Highbush Cranberry shrubs. The Bohemians, primarily more western birds, drift eastward in some winters. They are infrequently observed on our counts, but the Cedars show up nearly every year. We had a new high of 447 Cedar Waxwings on our recent Sturgeon Bay CBC.

Each count area is a 15-mile diameter circle. With quite a few miles of water within the Sturgeon Bay area, including Lake Michigan, the Sturgeon Bay Ship Canal and Green Bay, we usually expect to tally a fair number of species of waterfowl. However, this does depend largely upon the amount of ice build-up along the shores. This past December turned out to be ideal for the waterfowl to be quite close to the shores.

A new high for Canada Geese, 6,168, was established. These, by the way, belong to the non-migratory giant race of the Canada Goose. There are always plenty of mallards wintering here, with 748 being counted this year. Our high of 1,380 occurred in 1997. In most winters the Common Goldeneyes gather in large numbers. This year only 70 were seen, compared to 586 in 1997. The flashy mergansers, both the Red-breasted and the Common, are exciting waterfowl to watch. This year 519 Commons were counted, though a high of 1,847 was seen in 2004. Fewer Red-breasted, 101 this year, winter here. 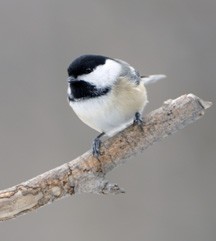 The Black-capped Chickadee was the most often recorded species on this year’s Sturgeon Bay count. Photo by Roy Lukes.

Seeing a Bald Eagle always turns out to be one of the highlights of a count day. The very first Bald Eagle seen on our Door County CBC’s, begun around 48 years ago, was seen by Carl Scholz and me over the water on Dec. 30, 1976 at what is now the Rowleys Bay Resort. Our most recent Sturgeon Bay count tallied eight of these awesome birds while the recent Brussels count recorded 14. We assume some of these birds are not among those that nested here, but rather are migratory and heading southward for more open water near the shores. Suffice it to say that Bald Eagles have made an excellent comeback during the past 30 years or so. Counters in the Fox River area, near the 1,000 Islands Nature Center at Kaukauna, recorded 62 Bald Eagles perched in two trees near the river on Dec. 26, 2011.

Christmas Bird Counts in the United States, inspired by Frank Chapman, curator of ornithology at the American Museum of Natural History, were begun in 1900. They were a protest of the original Christmas Day “slaughter” in which “sportsmen” vied for the title of who could shoot and kill the most birds and mammals or anything that moved, on Christmas Day.

Over the past 111 years these worthwhile counts have contributed significantly toward the indication of trends in expansion or reduction of the ranges of bird species, tracked increased flights or invasions of species into the state, and helped our Wisconsin Society for Ornithology follow fluctuations or dramatic changes in bird populations. Consider joining one of the CBC’s next December near where you live. You’ll be glad you did – and so will the birds!