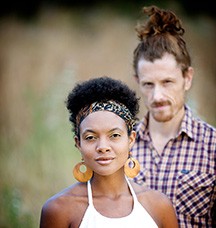 The soulful harmonization of the musical collective, Birds of Chicago, will assist the Door Peninsula in the celebration of America’s birth over the Fourth of July weekend.

“Any chance we have to sneak out to the Door we take it,” said JT Nero, who, along with his wife Alison Russell, is at the center of the music collective from Chicago.

“We play up there (Door County) every summer,” Nero says over the phone as he and his family are making their way through the beautiful mountains of Northern California en route to Oregon for a performance.

Since combining musical talent and pedigree back in 2012, the duo has been traveling from Door County to the United Kingdom. They were “musical kin from the start,” Nero says.

Prior to forming Birds of Chicago, the couple had their own separate collectives. Nero was involved his Chicago-based band JT and The Clouds and Russell was part of Po’ Girl, a band situated in Vancouver, Canada.

Both Nero and Russell had success with their individual projects and it was mutual appreciation for each other’s work that brought the two together. They began collaborating with each other’s musical endeavors and in 2012 decided it was time to give their unique bond its own space to grow and develop.

Their roots sound and synthesis of classic soul, country, and old-school gospel is a musical matrimony that has been praised with rave reviews from critics around the country. With such a myriad of talent, it’s hard to classify the group within a specific genre but “rock and roll poetry” is a categorization that the couple feels conveys their style and brand.

Nero sees their approach as a variety/combo of rock and roll.

In regards to the poetry component he sees that “it’s more of an idea that it (music) can be can be lyric-driven and lyric focused music and not so obviously folky.”

Depending on their geographical location, the size of the band fluctuates. When playing at venues closer to home, the band in its entirety is comprised of Nero, Russell and Nero’s bandmates from JT & The Clouds. The whole ensemble will be in the Door when the band plays at Bier Zot Gastropub in Sister Bay on Thursday, July 2 and at the Fiddler’s Roof on Washington Island on Friday the 3rd.

Washington Island has a special connection to Nero as his mother grew up there and it is a haven for decompression and rejuvenation.

“The Island is a second home to us,” Nero says.

Bigger things are still to come for the group as they recently cut a new album that will be available for public consumption early next year. Real Midnight was created with Grammy Award-winning producer Joe Henry and will accommodate a more reflective/meditative tone.

Nero says this record puts a stamp on what the band is about.

“For people that haven’t heard us yet, we like it’s our first definitive statement about who we are as artists.”