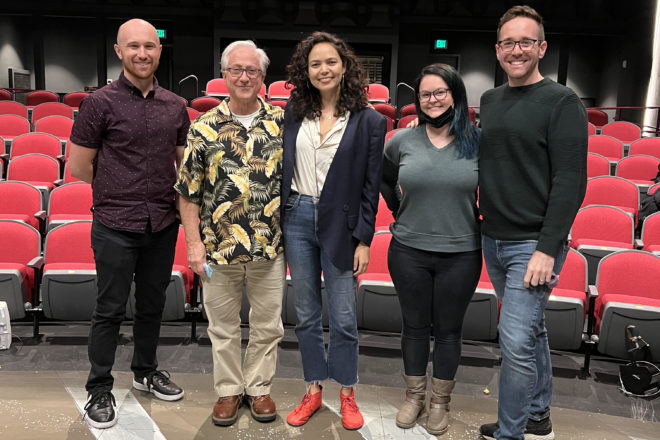 Despite its name, Third Avenue PlayWorks’ (TAP) upcoming play Birds of North America is more about humans than birds, according to lead actor C. Michael Wright.

Spanning the course of a decade, the story follows the relationship between a father, John (played by Wright), and his daughter, Caitlyn, as they bond over watching birds. Though deceptively simple, the plot touches on universal themes of “how we struggle to communicate with each other and care for each other,” Wright said.

And the show was enough to pull Wright out of what he called “semi-retirement.” After 45 years of professional acting, he now works only on projects he’s especially excited about – and Birds of North America fell squarely into that category.

Part of Wright’s excitement comes from how his role in the play has made him rethink and deepen his relationships off-stage.

“The writing is so insightful,” he said. “I’m constantly saving something that I want to go repeat to someone else.”

The play’s complexities have also allowed Wright to build a relationship with his only castmate, Dekyi Rongé. At the time they were interviewed for this story, the two actors had worked together for only a week, but already during that time, they had made each other laugh, cry and think as they worked through the script together, Wright said.

Although he doesn’t have children of his own, a lifetime of working with young people as a teacher, director and acting coach made it easy for Wright to relate to John and Caitlyn’s relationship.

He also relates to the undercurrent of climate anxiety that runs through the play as the father-daughter duo observes birds’ altered migration patterns throughout the years. As John muses about what he’s passing on to his daughter, the audience is pushed to reflect on a broader version of the same issue.

“What are we passing on to the next generation? Are we taking care of their world, and we are helping them learn how to do that?” Wright asked.Birds of North America runs Oct. 2-30, Wednesday-Saturday, 7:30 pm, and Sunday, 2 pm. Purchase tickets ($20-$35 per person) online at thirdavenueplayworks.org or in person at Third Avenue Playhouse, 239 N. 3rd Ave. in Sturgeon Bay.