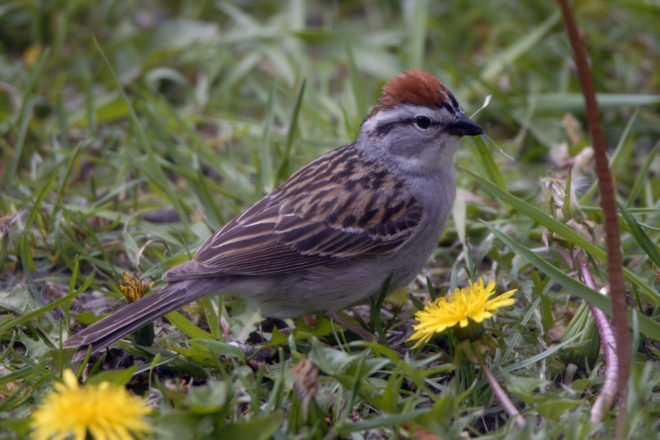 Many people look down on the common sparrow as a bird that’s unworthy of any praise. When the sparrow is mentioned, most people think of the English house sparrow, a nonnative “pest” brought here from Great Britain.

The word “sparrow” dates back many centuries and originally meant the common yard bird of the Mediterranean area, one of a large group of African weaver birds in the genus Passer domesticus. That species is now known as the house sparrow, or weaver finch. They are very aggressive and can disrupt the breeding of cavity-nesting birds such as purple martins, bluebirds, tree swallows and some woodpeckers.

The house sparrow was introduced to the Americas in about 1850 and has spread across the entire continent. A close relative, the European tree sparrow, was introduced to the St. Louis, Missouri, area in 1870, and it has remained as a small colony there. These two sparrows are members of the old-world seedeaters and are the only true sparrows in our country.

Many of the native birds we call sparrows are actually in the Fringillidae, or finch, family. They are New World songbirds that are also seedeaters. Included in this large group are the buntings, cardinals, crossbills, finches, grosbeaks and sparrows. They are known for their sturdy, cone-shaped beaks, which are great for cracking open seed casings, such as those of sunflower seeds.

To make things really confusing, the birds with “bunting” as part of their common name are now in the Passerina genus. This includes cardinals, tanagers, buntings and most of the grosbeaks, but not the evening grosbeak or pine grosbeak.

According to the first Atlas of Breeding Birds of Wisconsin, Door County has eight sparrow species nesting here, plus the eastern towhee, which is now included in the Emberizidae family, a smaller group of New World seedeaters. Recent DNA analyses have divided certain perching songbirds into different families, so you can see why we call our birds by their common name rather than their Latin name.

Let’s concentrate on the seedeaters that we like to call sparrows. The two most numerous and widespread in their nesting throughout the state are the chipping sparrow and the song sparrow.

Our records of the first dates when the song sparrow has been seen in Door County, going back to 2002, are all in March. The earliest was March 11 in 2012. Chipping sparrows are seen a bit later: The earliest date is March 29, but most arrive by the middle of April.

Chipping sparrows are smaller than American tree sparrows, which can be residents here during much of the winter. They might both be near your feeders at the same time during the last half of April before the tree sparrows migrate north.

Both species have streaked brown, white and black feathers and a rusty, reddish-brown crown, but look at the beak color to help you identify them. The tree sparrow’s lower mandible is yellow. The chipping sparrow’s beak is completely black, and the horizontal stripe on the side of the face is black, in contrast to a rusty-brown stripe on the tree sparrow.

The chipping sparrow, or chippie, has long been known as the dooryard sparrow, and it is not a musical singer: Its song is a series of dry, rattling chips all on one pitch.

It frequently nests in ornamental shrubs, dense evergreens or low tree branches near homes and gardens. The nest has a cuplike form that’s intricately woven of fine grasses and lined with a bit of animal hair. The three to five eggs are a blue-green color, with some dark-brown spots at the wide end.

The song sparrow is a bit larger – close to six inches, versus the five-inch chippie – and is a strong singer. It breeds in many different areas: fields or meadows with brushy edges, along lakeshores with dense shrubs and small trees, in woodland edges, and at roadsides.

The nest is well hidden on the ground under a tuft of grass or in a bush, brush pile or a tree as high as 10 feet. The nest is a sturdy cup of grasses, weed stems, leaves and bark fibers that’s lined with fine grasses. Three to five greenish-white, heavily dotted eggs is the normal clutch. The song sparrow is heavily parasitized by the brown-headed cowbird.

Learn to identify the many sparrows that will be arriving back in Door County in April – and let’s hope that we won’t be digging out of heavy snow as we were two years ago!