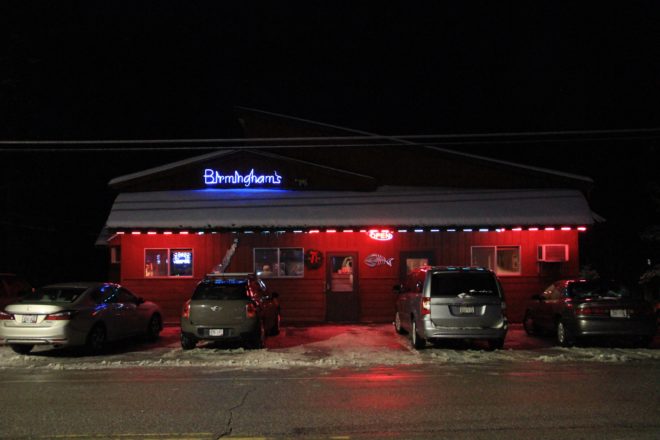 Birmingham’s takes the label of  “local family business” to the highest degree: The Bay Shore Drive mainstay restaurant and bar has involved many in the Birmingham family tree, is inextricably entwined with the local community and, of course, is rich with recipes that have been savored and passed down through multiple generations.

Owners Brad and Jackie Birmingham were prepared with binders, photos and maps when I arrived one afternoon to inquire more about the history of the local favorite eatery. After all, Brad is the third generation to take the helm.

Together, the couple has been involved with the establishment since 2003, when they took part ownership, sharing it with Marion June, Brad’s mother, and then assuming full ownership in 2014. Marion, who died at age 97 on Jan. 24, 2020, did all the cooking for more than 60 years and passed on her recipes and ways of preparation in the kitchen to Jackie and the current chef, who strive to recreate her style and flavors as much as possible.

“Oh, yes, we have kept all of the recipes the same,” Jackie said when asked whether the menu has stayed consistent throughout the decades. “From the potato salad to the bread, and even then we still had her taste things to make sure it’s right.”

Those nostalgic flavors take some diners back decades in their own lives, to when annual family vacations on the bay side of Door County included a week at the Bay Shore Inn Resort, comprising six rental cottages located behind the restaurant near the shore.

“There are generations of families that come back every year, and they expect the same thing. Even the things on the walls we don’t change,” Jackie said. “When we changed from lighthouses to boats, that was a big deal,” Brad said, referring to the series of Budweiser mirrored decorative frames hanging on the long side of the dining room.

There are other more historical items, too, that would cause an uproar if they were missing, including an Elton John Captain Fantastic pinball machine that was purchased new in 1976 and has called the corner of the bar home since then, as well as an intricate model sailboat on the wall near the entrance.

“I tell people, if the bar is on fire and you want to be saved, just stand under the sailboat replica [because that’s the first priority],” Brad joked.

Birmingham’s is best known for its nostalgic feel and food, including a Friday fish fry, Swedish meatballs, famous homemade bread, Sunday chicken broast and hamburgers served on white bread. The ever-popular fish fry – served with sides of coleslaw, potatoes and sliced bread – always comes on a paper plate. You have the option of lake perch, whitefish and shrimp, and in true Wisconsin style, you’ll want to order a classic brandy old-fashioned while you wait.

Although the menu’s classics will always stay the same, that’s not to say that small changes haven’t occurred since Brad and Jackie took ownership, including adding a daily soup, which has been a big success. On Tuesday evenings, Jackie also creates her own nightly special based on which ingredients are available – or what Brad is craving. Recent nights have showcased ham and scalloped potatoes, enchiladas, shepherd’s pie, and lasagna with garlic bread.

Brad and Jackie’s four children are in line to be involved in the restaurant one day as well, with one son already staffing the bait shop and market across the street, and their oldest daughter assisting with setting up their website and Facebook page. You can now follow Birmingham’s Bar and Restaurant on Facebook to find out about specials, events and other happenings.

The small evolutions at Birmingham’s have helped to introduce new visitors to the classic restaurant, but there’s little doubt that the traditions and flavors of the past near-century will be carried forward proudly for decades to come.