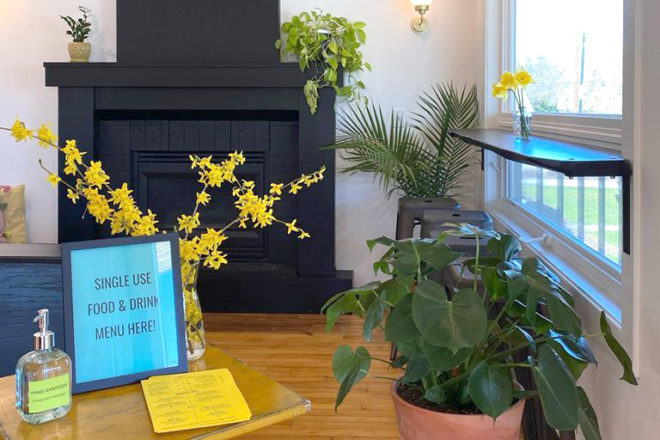 Baileys Harbor’s tiniest coffee shop isn’t so tiny anymore. Bearded Heart announced that it was moving from its original location in a small building next door to Door County Brewing Co. in January, and it’s now moved into a larger building down the street that was previously the headquarters of Door Shakespeare.

After some remodeling, the reopening was planned for March, but the pandemic pushed the opening date until April, when Bearded Heart began offering pick-up. The new, larger space finally opened to customers in mid-May. It carries over some of the original aesthetic, with pops of sunny yellow and modern, fresh décor accented with a bold, black fireplace and lots of green plants.

Customers will find the same delicious coffee and bites to eat, plus an added beer and wine menu and bagels from Ruby’s Bagels in Milwaukee.

A beloved soup restaurant in Ephraim has closed after nine years. Czarnuszka Soup Bar, owned and operated by Paul Wanish, was known for its limited menu of rotating soups, which its Facebook page announced daily.

Wanish made the soups from scratch using inspiration from his experiences living in Poland and years of cooking around the county.

According to the announcement on his Facebook page, “My last day of biz was Feb 29th. I started my new job 8 days later. I loved running the soup shop. My little project supported me well for nine years, but to continue would probably put me back in the hospital with another spinal fusion surgery, so I found another line of work. Honestly, I’m super sad to dissolve the CZ, but I can take comfort in the fact that I’m ending the biz on my own terms, not from lack of customers.”

Clover and Ash – on Highway 57 in downtown Baileys Harbor – kicked off its first summer season with its May 15 reopening followed by limited capacity dine-in service on May 21. The grand opening took place in January after nine months of remodeling.

The menu originally featured Asian-fusion plates, but it has now been updated to focus on traditional Italian plates, salads and Neapolitan-style pizza. “The former concept was based on sharing small plates and community tables which we thought would not be a big hit post crisis,” said owner Britt Unkefer. “We came up with Italian because it had been something I had wanted to do for quite a long time and lends itself to carry out as well.”

“Door County Box was inspired by the idea of wanting to share Door County with anyone and everyone in the comfort of their homes,” Christiana said. “Door County has so much to offer, and there are so many local businesses to support! Not only that, but Door County has delicious food and treats that are one-of-a-kind to the county, and my husband and I knew that we wanted to bring those goodies together into themed gift boxes.”

Foodies can look forward to more delicious Door County-themed boxes as well, from cherry themes to boxes for those with a sweet tooth. Order boxes at doorcountybox.com.