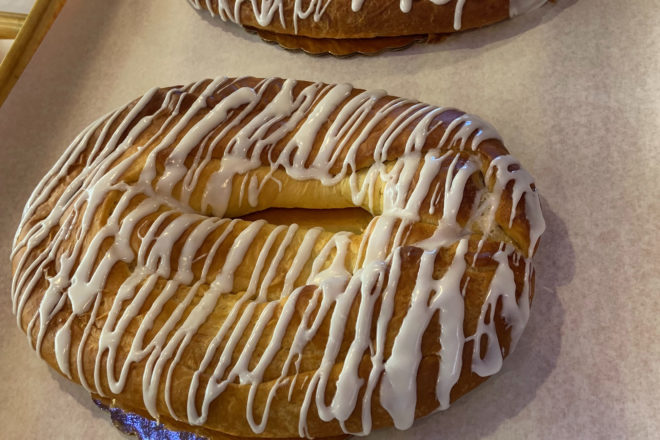 Asked how this new item came about, co-owner Rob Scaturo said, “Honestly, we had some time on our hands during the lockdown. We did some taste-testing – which was probably the best part of the process – and came up with a thicker, sweet dough. It’s traditional but not as flaky as the Racine version.”

Scaturo’s now offers kringles daily, and the staff is testing various flavors to determine which to place on the menu permanently and which to rotate in. This week the flavor is cherry cream cheese.

Kim Jensen – owner of Mojo Rosa’s, Villaggios, Pink Bakery and Village Cafe – has added a new cuisine to her roster in the form of fresh, made-to-order Asian takeout.

Beginning May 28, Bangkok Asian Takeout became available for order and pickup at Mojo Rosa’s in Egg Harbor. The new concept will eventually move to the former Villagios space in Juddville, but because of COVID-19, those plans have been postponed until 2021. Villagios is moving into the former Trio building in Egg Harbor, also in 2021.

“Many of our Door County community members had asked if we’d ever considered Asian food, and the more we thought about it, it made sense,” Jensen said. “We also recognized that the [Juddville] building itself is central between Fish Creek, Egg Harbor and Baileys Harbor, so we wanted to have a quick takeout option that was accessible to several of our communities.”

The menu is currently limited, based on operating as a “pop-up,” but customers have gravitated so far toward the pad thai, General Tso’s chicken, and seafood rangoon.

“We make all of our sauces from scratch and are having a lot of fun with the menu,” Jensen said.

Woodwalk Gallery (WWG) in Egg Harbor is continuing its dinner series this summer – this year with Gretchen (Gigi) Geurts and Robert (Robby) Van Egeren of Ohana Hospitality, a private chef and catering service.

“We are very excited to partner with Ohana to bring three experiential dining events to WWG,” said Jilliane Burton Seefeldt, co-owner of Woodwalk Gallery. “And with a maximum seating of only 30 people, they will be safe evenings as well. Space and fresh air are abundant. Even if there were bad weather, we have ample space for that size group inside.”

Woodwalk Gallery will provide a beautiful dining setting in its rustic barn and art gallery; Ohana Hospitality will offer an interesting, global approach to the dining.

“All dinners will have an emphasis on a theme and intentional beverage pairings by donation,” Geurts said. “July is Southeast Asian; August is Hawaiian luau; and September is Brazilian barbeque.”

“We have taken to calling it Trolley Red for short,” said co-owner Peter Gentry.

The brew’s can design and name pay homage to the classic red of the Egg Harbor-based Door Country Trolleys, which are seen touring around the county. Originally, the brewery and trolley business planned to throw a larger launch celebration, but the pandemic derailed those plans. Still, the new lager has quickly become popular at One Barrel’s Madison taproom.

“This one starts off with a slightly sweeter lager style, and we add a puree of Montmorency cherries after fermentation is complete,” Gentry said. “This lends a bright cherry aroma and flavor – not to mention a striking red color. The fruit flavor, however, is not over the top because we are using a more tart fruit. In my humble opinion, it is a very well-balanced beer that most people will like, from light macro drinkers to big IPA drinkers, and even folks who prefer a sweetish wine.”