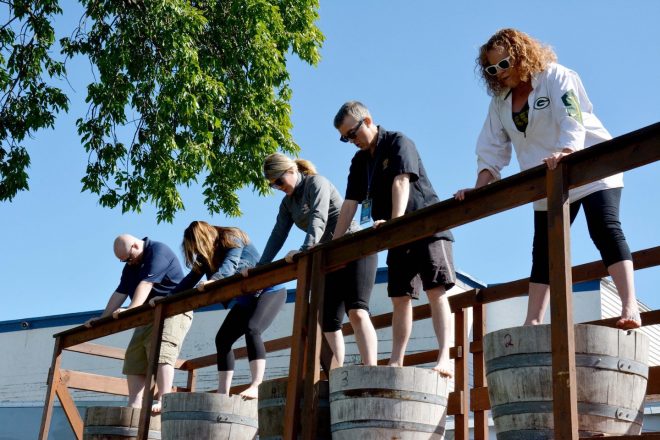 Wine lovers, rejoice! Did you know that “autumn” is Latin for “to drink wine”? Don’t quote me on that.

On Sept. 11 and 18, 11 am – 5 pm, Parallel 44 Vineyard & Winery’s Fall Wisconsin Wine Festival will celebrate the harvest with wine, food and music. Wine will be available to sample, buy by the glass and purchase by the bottle.

On Sept. 11, Booyah Shed will provide the food until 4 pm, and live music by Almost Normal will start at 12 pm. On Sept. 18, Caribbean Cruiser will be the food purveyor, with music by Good for the Soul. Parallel 44 Vineyard & Winery is located at N2185 Sleepy Hollow Road in Kewaunee.

On Wednesday, Sept. 15, Door County Trolleys will leave Stone Harbor Resort in Sturgeon Bay for the ninth annual Wine and Beer Gala at von Stiehl Winery and Ahnapee Brewery in Algoma. An evening hors d’oeuvres buffet, raffles, wine pulls and more will follow at Stone Harbor. ​Some of the prizes in this year’s event include a signed 2020 Green Bay Packer football, tickets to the Green Bay Botanical Gardens, themed gift baskets and, of course, bottles of wine and beer.

Limited seating is available. The ticket cost of $55 includes a raffle ticket for a chance to win one of the specialty gift baskets.

On Friday, Sept. 17, 5-9 pm, and Saturday, Sept. 18, 10 am – 6 pm, the Wet Whistle Wine Fest at von Stiehl Winery, 115 Navarino St. in Algoma, will raise money for Community Improvement of Algoma and the Algoma Fire and Rescue. The festival will offer award-winning wines, a grape stomp, hearty sandwiches and live music. Although the organizers don’t ask anyone to show up in costume, they expect that many attendees will.

On Aug. 27, the Red Rock BBQ team from Amasa, Michigan, won the grand championship. Peter Golob and his teammates dominated the Day 1 competition with finishes of 10th in chicken, eighth in pork ribs, third in pork and first in brisket.

The Reserve Grand Champion Award went to Let’s Get Tanck’d from Green Bay. Steve Tanck and his team finished 15th in chicken, second in pork ribs, fourth in pork and third in brisket. The Tanck’d team was fewer than two points behind the Red Rock BBQ team.

Rounding out the top five were Shiggin and Grinnin from Delano, Minnesota, in third place; The BBQ Bus from Elmhurst, Illinois, in fourth; and the Texas Smoke Whisperer team from Midland, Texas, in fifth.

On Aug. 28, another first-time team, Can Country Outlaw BBQ, garnered the grand championship. Jason Halterman and his crew from St. Louis, Missouri, roared back from 15th place on Friday to claim the top prize on Saturday.

Taking home the Reserve Grand Championship Award was The BBQ Bus. Brian Dwyer and his son stepped up their game from Friday to finish in the runner-up spot.

Finishing in third were the Porkrastinators from Woodstock, Illinois; the Machete Boys BBQ from Fridley, Minnesota, took fourth; and completing the top five was Big E BBQ from Huntley, Illinois.

In the dessert category, the winner was Wicked Smoke from Fort Atkinson, Wisconsin. Finishing in second place was High on the Hawg from Fayetteville, Tennessee; third place went to the 270 Smokers team from Lexington, Virginia; the Smokin’ Highwaymen from Sobieski, Wisconsin, took home fourth; and finishing in fifth was Second Hand Smoke from Appleton.