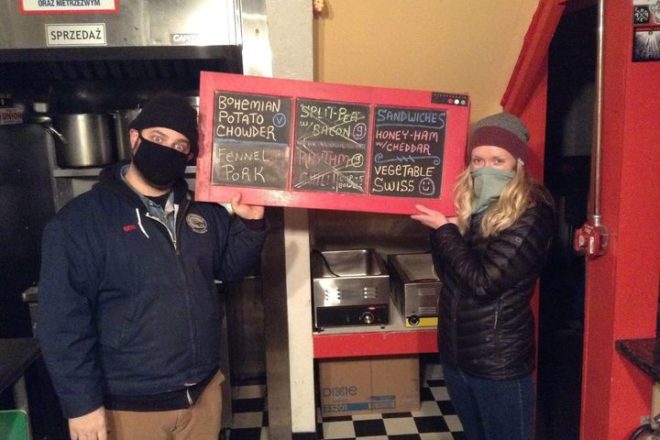 Husband and wife Ben McMahon and Laura Seaquist will carry on the soup tradition at Czarnuszka in Ephraim. Submitted.

Wanish also posted that he’s overjoyed the couple will keep the ball rolling after his back made the task too daunting to continue.

“I am anxious to see them bring new vigor, new energy and new ideas to a business I cherished and had a whole lot of fun creating,” he said. “I also look forward to walking in there soon as a customer and sitting on the other side of the counter.”

McMahon and Seaquist will soon take over Wanish’s Facebook business page, and he’ll give up his administrator status, so the social-media post was his final one, he said. He also used it to express gratitude.

“Thank you to everyone who came in, joked around with me, played along, got the jokes and slurped some soup,” he said. “Please return this spring and see what fun, new things these friends bring to the shop!”

Sister Bay – At Waterfront Restaurant in Sister Bay, Wednesdays and Thursdays are bringing something new through the end of the year. “Tapas, burgers, martinis and social distancing” are on the bill at one of the county’s most acclaimed restaurants.

According to a post on its Instagram feed, diners can “think of it as a very casual, sparsely attended, holiday party for one.”

The specials are available for dine-in or carryout, but no group dinners. Those looking to dine in are asked to call ahead so the restaurant can plan for socially distanced seating.

The Waterfront is open Wednesday – Saturday through Jan. 1. It will be closed Dec. 23-26.

Front-of-house staff members are helping in the kitchen and learning new skills.

“We’re exhausted, and we’re just trying to keep people employed,” Holmes said. “We couldn’t do indoor dining right now and feel right about it. As hard of a decision as it was, I had to figure out how to keep front-of-house staff working.”

Holmes said his goal is to stay open at least through mid-February, but like all business owners, he’s keeping an eye on the legislators in Washington, D.C., and Madison to see whether there’s more help coming for the battered restaurant industry.

“Literally, I’m just trying to see what the hell is going on,” he said. “Until we have a few more answers, I’m just trying to keep running. I want to keep people employed for them, but also for me to retain our great staff. I don’t want to lose people.”

Sturgeon Bay – Cherry Lanes, the historic Sturgeon Bay bowling alley that was remodeled into an arcade bar and bowling alley in 2018, is up for sale or rent. The building dates to 1929 and includes 15,000 square feet and a completely renovated bar. The list price is $550,000.

“The gold medal-winning 2017 cabernet sauvignon is a great example of our growth as winemakers and our brand,” said Anthony Bilwin, general manager. “This cabernet showcases how supple and elegant Sierra Foothills AVA fruit can be when aged 16months in French hybrid barrels. It releases fragrant aromas of cassis, black cherry and plum, with balanced tannins and flavors of dark berries and currant.”

The wines showcase the diversity of the winery’s portfolio and add to its already impressive range of fruit wines, brandies, ciders and high-end, varietal-specific wine made from California and Washington fruit, Bilwin said.