Charlotte and I were living in the Ridges Rangelight Residence (the Upper Rangelight) in January of 1982 and planning to build our own home that summer. We received a New Year’s Eve snowstorm, often called an “Oklahoma Hooker.” In our case it was a strong low pressure system that traveled from the western states, dropped down toward Oklahoma, picked up a great amount of Gulf of Mexico moisture and brought us 13 inches of wet heavy snow. That offered us the biggest challenge we’ve ever had of trying to plow and shovel that “lead-heavy” snow.

The telephone line from our residence out to State Highway 57 became imbedded in the icy snow among the conifers. Succeeding storms brought more snow and bitter cold and wind. The middle of the month gave us a morning low of 30 degrees below zero! That was not the wind chill; it was the actual air temperature.

The Rangelight was built in 1869 and had no modern insulation in the walls or ceiling. The north-facing kitchen windows had large icicles going clear down to the ground, making it appear like prison bars. Quite remarkably I lived there for 16 years and Charlotte for 10. 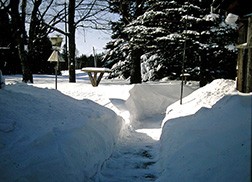 There were winters when we shoveled a few tons of snow from the Ridges Rangelight sidewalk.

That frigid morning we called our widowed elderly neighbor lady across the street to see how she was faring. The phone line was dead. It had become frozen in the snowy conifers and snapped with the wicked winds. This was the height of “cabin fever” for us!

That one month, January 1982, the Ridges Sanctuary was blanketed with 60 inches of snow. This resulted in six-foot high snow banks along our driveway. One Saturday, after a week when 20 inches fell, we invited friends from Sturgeon Bay to cross-country ski with us. They arrived in the morning and all of us had to first go snowshoeing to pack down the new snow along the trails. After lunch we then could ski without being buried in the white stuff. It was “pure paradise,” a winter wonderland! One feature all of us thoroughly relished was being in the “forest primeval” liberally trimmed in “white” with its awesome quietness.

It’s not easy to observe pure nature sounds versus the typical racket that abounds in our society where the clatter of engines and motors prevails. Where and when can one observe pure nature sounds today? Dawn is so important to the wild animal world. Perhaps a good starting point would be to arise before most people are up and around and enjoy the wild creatures as they salute the dawn.

I recall another memorable and favorite sound of nature I recorded along the frozen shore at Baileys Harbor. The bay had frozen with a thin coat of ice and now the wind was veering into the south, causing the ice to gradually break apart with slow but audible “zinging” that reminded me of the eerie “singing” of whales that has been so wonderfully recorded below the surface of the oceans in past years.

Immediately I thought of attempting to record that ice “music” to add to our program we call “Music of Nature.” Within minutes I had my parabolic recording device and field tape recorder and was quietly standing on top of the roadside snow bank near the Baileys Harbor public bathing beach. Fortunately the night was perfectly still and quiet as I stood there, arm outstretched, holding the parabola and microphone, tape recorder slung over my shoulder, enjoying the starry night.

Suddenly, wouldn’t you know it, one of the local men came driving his pickup truck very slowly toward where I was standing, parked it but left the engine running and came to where I was intently recording the night sounds. It was only natural that he would ask me, “What are you up to? Without even turning my head toward the gentleman, I paused about five seconds before I answered, “I’m recording the ice.” He too paused about as long before answering me with only one word, “Oh,” walked back to his truck and drove off. To this day I still wonder what strange thoughts went through his head! And, yes, I did get a very good recording of ice music! 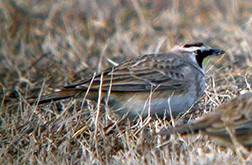 This handsome male Horned Lark has his black feather horns flattened against his head.

Another “music of nature” experience that will live with us forever occurred on a mid-April morning near Plainfield, Wis. Crouched in a blind since before daybreak, we were studying and taking notes on the breeding activities of a flock of prairie chickens, helping out the Hamerstroms with their exciting ongoing project. A sliver of sun was just appearing on the horizon and the air was frosty cold without a cloud in the sky. Suddenly out of nowhere a Horned Lark flew in and landed on a clod of ground within six feet of the blind. There, facing the rising sun, this little creature let loose with an early dawn aria that was indescribably beautiful, continuing on and off for at least 10 minutes.

Do you suppose being able to enjoy pure nature sounds increases with a slower lifestyle? Surely you know what my opinion is! I will even go so far as to recommend that this coming mid-March or a bit later you give it a try by paying more attention to the genuine harbinger of spring, the Horned Lark.

Once the snow has melted from the fields, drive at dawn to a wide expanse of farming country where you see the larks along the shoulder of the road. Park the car, turn off the engine and roll down the windows. Unlike the dawn bird of civilization, the rooster, that everyone knows so well, listen intently for the delicate, tinkling “silver bells” aerial songs of a male lark, high overhead as he serenades his lady-love on the ground below.

Work hard to develop a love for the quiet wilderness soundscape. Help cherish and preserve it. Through it you will feel the rhythms of your Mother Earth.