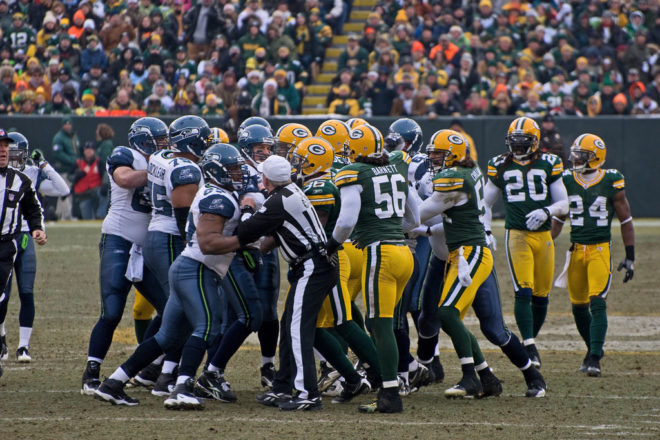 Officials separate players in a small skirmish during a game at Lambeau Field in 2009 between the Seahawks and Packers. Photo by Mike Morbeck/public domain.

The Green Bay Packers now have back-to-back wins as they prepare to host the Seattle Seahawks in Lambeau Field on Sunday. The Packers are coming off of a 21-13 victory against the AFC South’s leading Houston Texans (6-6) last Sunday. The win brought Green Bay (6-6) back to .500 with four weeks remaining in the NFL’s regular season.

The Seattle Seahawks (8-3-1) maintained their lead atop the NFC South with a convincing 40-7 victory against the Carolina Panthers on last week’s Sunday Night Football. Seattle will come to Green Bay with control of their own playoff destiny while Green Bay’s playoff hopes hinge on their success against division rivals Minnesota Vikings and Detroit Lions in weeks 16 and 17, respectively.

Since just before the turn of the century, the Seattle Seahawks and Green Bay Packers have shared several unpleasant moments in this NFC rivalry.

After the 1998 season, Packers head coach, Mike Holmgren, resigned in favor of accepting an eight-year contract offered by the Seattle Seahawks. Holmgren was enticed by the offer as it also presented him the dual positions of executive vice president/general manager, along with his head coaching duties. In short, he was in charge of all football operations in Seattle.

Holmgren’s departure for Seattle left a noticeable void in Green Bay. In his first season with Seattle in 1999, his Seahawks were slated to play the Packers at Lambeau Field in Week 8 on nationally televised Monday Night Football. Holmgren triumphed in his emotional return to Lambeau Field with a 27-7 victory against his former team.

Following the NFL’s division realignment in 2002, after the addition of the Houston Texans as the 32nd team in the league, the Seattle Seahawks were moved from the AFC West to the NFC West. This would result in the Seahawks and Packers meeting more frequently, with the additional chances of facing off in the postseason in the years ahead.

It did not take long for these two teams to find one another in the postseason. On Jan. 4, 2004, the Seattle Seahawks came to Green Bay in the opening Wild Card round of the NFL playoffs. Former Packers’ backup quarterback Matt Hasselbeck led the Seahawks. Hasselbeck was reunited with Holmgren in Seattle and was in the early stages of a successful NFL career.

With the game tied at the end of regulation, 27-27, both teams met at mid-field for the overtime coin toss to determine first possession. Seattle winning the coin toss led Hasselbeck to utter the phrase, “We want the ball and we’re going to score!” With the PA system on, the 71,457 fans in attendance at Lambeau Field listened to Hasselbeck’s confident and playful comment.

Unfortunately for Hasselbeck and the Seahawks, in Seattle’s second possession of overtime, a Green Bay blitz caused Hasselbeck to throw early. Packers’ cornerback Al Harris stepped in front of the throw and returned it 52 yards for the touchdown, resulting in a thrilling 33-27 Green Bay victory.

On Jan. 12, 2008, the Packers hosted the Seahawks in the Divisional Round of the playoffs at Lambeau Field. In a snowstorm, the Packers overcame an early 14-point deficit in route to a 42-20 win. This would be Brett Favre’s last game as a Packer in Lambeau Field and his last victory as a member of the “Green and Gold.”

In one of the most controversial finishes in NFL history, the Seahawks hosted the Packers on Monday Night Football in Week 4 of the season on Sept. 24, 2012. As replacement officials took the field due to the referee lockout of 2012, the results of this game had a substantial impact on resolving the dispute between the league and its officials.

On the final play of the game, with Green Bay leading 12-7, Seattle’s rookie quarterback and former Wisconsin Badger Russell Wilson heaved a Hail Mary to the endzone as time expired. Packers’ defender M.D. Jennings appeared to have come down with the interception while Seahawks’ receiver Golden Tate also managed to grab simultaneous possession after pushing off of another Packers’ defender. Officials in the endzone gave contradicting “touchdown” and “touchback” signals, causing confusion throughout CenturyLink Field and to television viewers alike.

After discussion, Seattle was awarded the touchdown. Green Bay, who had left for the locker room after the touchdown ruling, had to make their way back to the field after several minutes to line up for the extra point. Seattle won, 14-12.

The NFC Championship game in Seattle on Jan. 18, 2015, added to the friction between the teams. Holding onto a 19-7 lead with less than four minutes to play, the Packers committed a series of mistakes that led to a historic collapse and an epic comeback for the Seattle Seahawks. Seattle eventually won in overtime, 28-22, and earned a berth to Super Bowl XLIX where they would fall to the New England Patriots. Green Bay was left in disbelief after the loss that left them one game out of the Super Bowl.

Sunday’s contest will certainly have playoff implications for these teams. The results may further the long-brewing bitterness from the team that finds itself on the losing end.