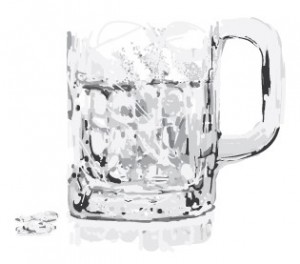 Head-butting pint glasses and the driving pluck of a guitar string fill my head of smoke and bees. The bartender has been feeding me a steady diet of bitters and rag-water. Her red-lager hair is overflowing, as is her white blouse, taken down three buttons – by the end of the night, two more button will have struggled free from their holes. My speech is fractured and sparse, but she listens and smiles, until I run out of money and time.

One of the two cooks that dragged me here saunters back from the jukebox – a compact, bald Chicano, belting with Jim Morrison and playing his air guitar.

“Keep your eyes on the road and your hands upon the whee-AL!” he sings to the bartender, climbing up the stool to my left. Two stouts and three shots of bitters are plunked before us, and the cook slaps me on the back. “Let it roll, baby! Hee-Hee!”

Emerging from my glass, I catch the other cook, the head-cook, coming back from the bathroom. Missing several teeth, shirt unbuttoned, and wobbling like Jell-O in a steady breeze, he looks like the drunken Zen master, who smacks his disciple upside the head for thinking he was just a drunk. He plunked down on the stool to my right.

“Remember,” he turns to me, “heartbreak is good for the skin,” he downs his bitters, “but it’s real bad for the liver!” He lets loose his hoarse, windy laugh, Hurh! Hurh! Hurh!

He only drinks top-shelf vodka and he’s been spilling stories all over the bar the whole night. The cook on my left leans over me to ask, “I heard they let Manny go.”

“Yeah,” the head-cook draws out his words, low and dusty. “He was stealing lobsters.”

“No…no…but when he came back to work, he still had the bib on.”

I get the Hurh-Hurh! and the Hee-Hee! in stereo, and smile a little before draining my stout.

“Hey, barkeep,” the head-cook calls, “This one’s got a problem.”

“Oh yeah, he was talking my ear off before,” she says with a half-smile.

“No, no, no, no, no…he’s got a special problem. To be pee-see, we call it fermentationally challenged.” He tinks my glass with a long finger. “What’s gonna light yer fire, kid?”

“Save our city!” the cook yells, eyeing a table of vacationers.

“How about some curry?” the head-cook baits. “I know where to get a goat. Braised goat curry, where the mutton’s nice and lean…”

I see a smile spread over my face, looking at the reflection in my glass.

“Hurh-hurh. Forget it, kid. Marriage is either a power struggle or a housekeeping arrangement, and we don’t need either.”

“Give up your vows!”

“A first marriage,” he holds forth, his words windy through his gaping teeth, but deep, “it’s like a dream. Bad. Good. Doesn’t matter. It’s like a dream…you’re not all there. You don’t even think about it, until it happens.”

“Like pissing in a kilt,” the other cook sloppily adds.

“Hurh! It’s just the next course of action in the stage of events.” He drinks and thinks. “Or because you want something to love and to love you, no matter what… Well, that’s the naïve nature of the first…”

I find myself staring at the wooden ceiling, but the spins are getting the best of me, so I bring my head down, and see the bartender, and her buttons.

“But second marriages, they take place in a heightened reality, with all the knowing comparisons and the critical eye…you are extra careful playing that game of chess…”

“Aye!” The other cook perks up, “Gotta go feed the seagulls,” and jogs out the door.

“Listen, listen,” he continues, crunching on some ice. “In the second state of marital attention, it becomes, like, a project…a lineage. A logical proliferation, not emotional reproduction.”

“I didn’t want to stay,” I say, mostly to the last of my foam. Now, the bartender is leaning on crossed arms, trying to hear me. “But I couldn’t think of anything else I wanted to do…at least, not badly enough to leave.”

Her tone conveys that she’s done for the night, “It’s hard to learn to appreciate what you have, when you have it, instead of waiting to lose it.”

“Like kids,” the cook starts, contained more to his own stool now. “Which were once considered malignant, drooling, life-sucking diseases are suddenly…beautiful bundles of joy, ensuring our legacy is passed on.”

“I wanted kids.” It escapes my mouth before I could argue with myself in my head. “Did you?” I turn left to an empty stool. I turn to my right.

The head-cook slowly leans into me. I can see the red cracks of his eyes. He works his words slowly. “I am a stag of seven points…”

There is a furious, faraway loneliness in his eyes – so much so, that it doesn’t surprise me when he turns and leaves without another word, then pours into his car.

I am under the surface, completely soused. Time passes.

“Are you alright getting home?” asks the bartender, looking her age. We both know it’s just a short walk over the causeway. Goodnights are sloppy, thrown off-target, and I leave behind half-beers and spilled bitters.

Soon, with the moon on my heels, I am crossing the causeway. The lulling lap of water unfolds me, like an old friend. This is the same water as six months ago, I think. About the time the head-cook took me out to a runoff sluice, where, after a day of searching for the last chanterelles, we came to catch spawning salmon. In the silvery moonlight, the fins of salmon cut and thrashed through the water, and soon the cook was up to his knees in it, grasping for scattering fish.

I just sat and watched, forgetting about midnight supper, and saw the moonlit bodies of salmon littering the bottom of the stream, dead from exhaustion. The fish fought that current to nowhere, until they couldn’t, and sank.

Inside somewhere – in the deep innermost workings – someone may be trying to find an emblematic meaning to that night. But that person, deep inside, no longer has access to my face or mouth or head, so I keep moving, with that drunken-moon grin, singing softly, “…future’s uncertain and the end is always near…” and kick pebbles.