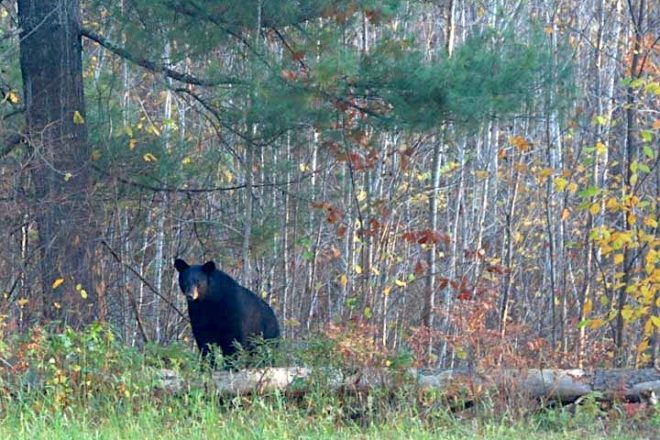 Wisconsin is home to 25,000 or so black bears. Photo by Catherine Khalar for the DNR.

Black bears have greatly expanded their range in Wisconsin, but they are still far and away most common in the vast forests of northern Wisconsin. Rarely, though, bears or bear tracks are spotted in Door and Kewaunee counties. Don’t believe it? Several bears were killed by hunters or vehicles in Door County decades ago.

Interest in bears is high here, with many peninsula hunters among the 100,000-plus statewide who apply for a coveted harvest permit each year. Most hunt over bait; others raise, train and hunt over trailing hounds.

Last season, 3,685 hunters of the 12,970 who drew a permit were successful. The odds were best in Zones A, B and D. Bear hunters using cameras over baits or training dogs this summer have reported a lot of action and a good range of sizes.

Those in Zone C may hunt over bait beginning Sept. 4, but those in other zones must wait until Sept. 11. Zones where trailing hounds are permitted open Sept. 4; in 2020, baiting hunters get the first opportunity.

Population modeling estimates the state bear population at about 25,000 – about six times larger than in the 1980s. Annual harvests trim less than 20 percent, but they are still the highest in the nation. Wisconsin is also No. 1 in trophy bear skulls registered with the Boone & Crockett and Pope & Young record-keeping organizations.

Hundreds of public complaints about “nuisance bears” are reported annually. These include bears that get into bird feeders, bee hives or garbage cans and those that destroy corn and other agricultural crops. More than 1,000 nuisance bears were trapped and relocated the past two years, and 50 bears were killed on ag damage permits in 2017.

Beginning in 2021, the state will increase the number of bear-hunting zones to six, up from the current four.

The committee will consider whether to advance spring hearing resolutions that would change the current rule for buck group bagging, change the bag limit of bucks to one per year per individual, and grant County Deer Advisory Councils the authority to allow or not allow baiting and feeding within their respective county.

Other resolutions deal with bringing back earn-a-buck, offering extend-a-buck – allowing an additional buck tag only if you shoot a certain number of antlerless whitetails first – and holding a 16-day gun deer season beginning the Saturday nearest Nov. 15.

Keep in mind that everything the Conservation Congress approves or declines is advisory only. The DNR, NRB and, ultimately, legislators have the final say.

At its Aug. 14 meeting, the state Natural Resources Board (NRB) accepted a donation from the Friends of Potawatomi State Park.

The Friends were previously approved to donate $90,000 to an accessible fishing pier project at the park, but they were awarded an additional grant from the Raibrook Foundation. Other money in the $430,000 project will come from the DNR and a committee-led effort through the Door County Community Foundation.

Construction on the new pier, to be located at the south-shore picnic area, is proposed to begin this fall and be completed sometime next spring.

The state Natural Resources Board is expected to authorize a public hearing and comment period for proposed rules relating to black-bear and ruffed-grouse hunting at a meeting in Madison Aug. 27.

Like all NRB meetings, it will be webcast live and available for on-demand viewing afterward. You can find the link to webcasts on the DNR website. There’s an opportunity to attend an NRB meeting closer to home – in Mishicot – on Sept. 25. More on that in a future column.

Award-winning taxidermist Mike Orthober of Egg Harbor will be at the Door County Historical Museum, 18 N. 4th Ave. in Sturgeon Bay, on Aug. 24, 10 am – 4 pm, to mount a bird for inclusion in the Seasons of Life nature diorama, which he designed and built. He’ll also be available to answer questions. Admission is free.