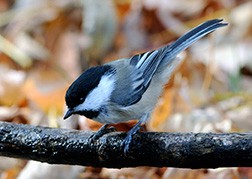 Have you ever seen what you thought to be a sad Chickadee? I can’t think of a better question to ask myself whenever I come down with a case of the February blahs. I’m sure these miniature feathered masterpieces, official inspectors of tree crannies, are rated as favorites by more people than any other bird.

Maine and Massachusetts chose this ever-curious creature as their state bird, and North Carolina nearly did so. Actually it was the Carolina Chickadee they originally chose, until one of its colloquial names, “tomtit,” meaning some little insignificant thing, soon had the legislators up in arms when people began calling North Carolina the “Tomtit State.”

They quickly launched a successful and politically motivated campaign to have their state bird changed to the Cardinal!

One of the greatest marvels of my entire life happens each sub-zero day when, sitting inside a comfortably warm house, I watch Chickadees carry on quite normally. The often-asked question is, “How can they survive in that bone-chilling cold?”

Banding, weighing and measuring nesting Chickadees from different latitudes has proven that individuals in the north tend to have larger bodies giving them less body area in proportion to their weight. This fact helps them to survive the extreme cold temperatures.

Another discovery is that the northern birds’ beaks, legs and wings tend to be shorter. These extremities lose heat more rapidly than the larger parts of their bodies, so the shorter to a degree they are, the better.

Interestingly a Chickadee’s heartbeat speeds up as the surrounding air temperature decreases. An active Chickadee in search of food on a sub-zero day could be expected to have a heartbeat of about 1,000 per minute. Its heart will slow down to about 500 beats per minute when the bird is asleep.

Every time I’ve held a chickadee cupped in one of my hands, the more I thought the body was actually vibrating very fast.

Talk about quickness and maneuverability. Stroboscopic studies of this speed merchant showed that it could change its direction of flight in three hundredths of one second. Its wingbeat of about 30 per second gives them their great ability to change direction practically instantly.

In thinking back to some of my favorite Chickadee experiences, one of the most exciting occurred on a Saturday in late September about 45 years ago. I had been splitting a pile of kindling wood in the driveway of the Ridges Rangelight Residence that afternoon, where I had been living at the time. My station wagon was parked nearby and the rear window had accidentally been left open. Chickadees were attracted to the scene by the sound of the wood being split. I had seen this occur often in the past and made nothing of it. My belief is that this can be traced to their habit of taking up feeding on the “table scraps” where Pileated Woodpecker had just finished its meal.

What l didn’t realize was that one of the Chickadees had accidentally flown through the open rear window and couldn’t find its way out. Having finished my wood-splitting chore I noticed the opened window, closed it, and went into the house for supper. I had to drive into Sturgeon Bay that evening, about 25 miles away, but did not see the bird inside the car. 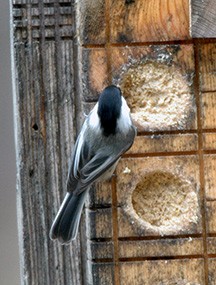 I completed my shopping, got into the car and had driven about one block when I noticed some creature fluttering above the dashboard next to the windshield. At first I thought it was a large Cecropia Moth. When the traffic ahead slowed down I took a closer look and was astonished to see the Chickadee.

Pulling over to the curb I easily captured the “hitchhiker” in my hand. Then I remembered the wood-splitting, the opened window, and realized how the bird came to be in the car, and 25 miles away from its home at the Ridges in Baileys Harbor.

There was no question in my mind. I had to return this frightened little “scamp” to my backyard where his unexpected journey had begun. I very slowly and gently reached downward and placed the Chickadee on the window-crank right next to my left knee. Much to my surprise the bird never budged all the way back to Baileys Harbor.

When we arrived home I picked him off the knob of the crank and went into the house for my six-volt electric lantern. I walked out to the edge of the woods, aimed the powerful beam up into the White Spruces and released the Chickadee. I easily followed its flight with the ray of the light as it flew upward, directly to the branch where it alighted. I’m sure my little prisoner-passenger of 50 miles and several hours was glad to be back home!

I have found Chickadees to be real scrappers when removing them from my mist nets used to harmlessly capture them during banding operations. They appear to highly resent being handled, and their sharp beaks land most accurately and forcefully with great authority upon one’s tender fingertips and knuckles. “Owie, ouch! Come on now, you little squirt! OH! Stop it already! Have patience little one. OUCH! You little scamp, you!” And all such words they make you say!

It won’t be long now and on some warm, sunny, late February day we’ll begin hearing the high, piercing three-note songs of the Black-capped Chickadees signaling the start of their pair-bonding and spring courtship. Gradually their visits to the feeders will diminish and before you know it they will have returned to the woods to nest and to survive on natural food.

Surely I speak for hundreds of people when I say that the Chickadees’ friendliness during the winter is valuable beyond words!