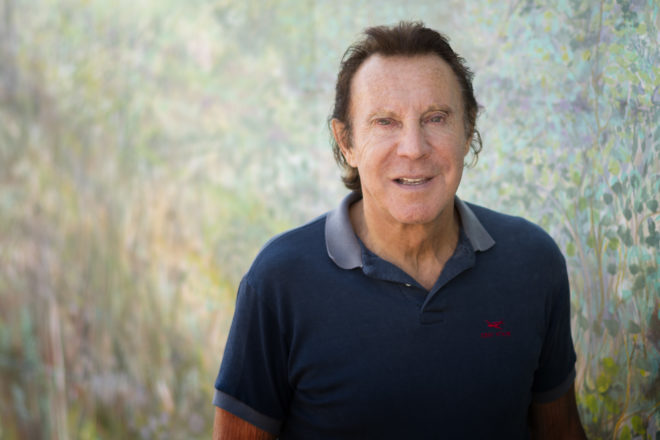 The average little boy in the U.S. is probably tossing a baseball with his dad or big brother by age three, so he’ll be ready for T-ball the next year. The timeline is pretty much the same north of the border, except that the sport (and the season it’s played) is different.

In Sault Ste. Marie, Ontario, for example, where Anthony James Esposito grew up, he got his first double-runner skates at two or three and single blades at four.

“Learning to skate well isn’t an easy thing,” he says now, “but we were on the ice every day in the winter — and when it gets cold in Canada, it stays cold. There was just one indoor rink in town, but every school had a little rink with lights, bleachers and a warm-up shack with a potbelly stove in the middle and separate areas for boys and girls.”

In 1962-63, Tony played for the Sault Ste. Marie Greyhounds. After high school, he received a hockey scholarship to Michigan Technological University (MTU) in Houghton, where he began to collect the honors that would multiply during his long career as a goalie. At MTU he was a three-time first-team All-America selection, was a major force in the Huskies’ winning the 1964-65 NCAA Championship and was named to the NCAA All-Tournament First Team. He still holds the MTU record as career leader in goals against average (2.55) and is second in the college record for career saves percentage (.912). He made the first team of the All-Western Collegiate Hockey Association three times and was also selected three times as an All-American by the American Hockey Coaches Association.

Tony graduated in three years in 1967, with a bachelor’s degree in business.

“It was a tough school,” he says. “Three unexcused absences meant an automatic F. They probably couldn’t be that strict today, but at that time, it was either go to school or go to Vietnam.” 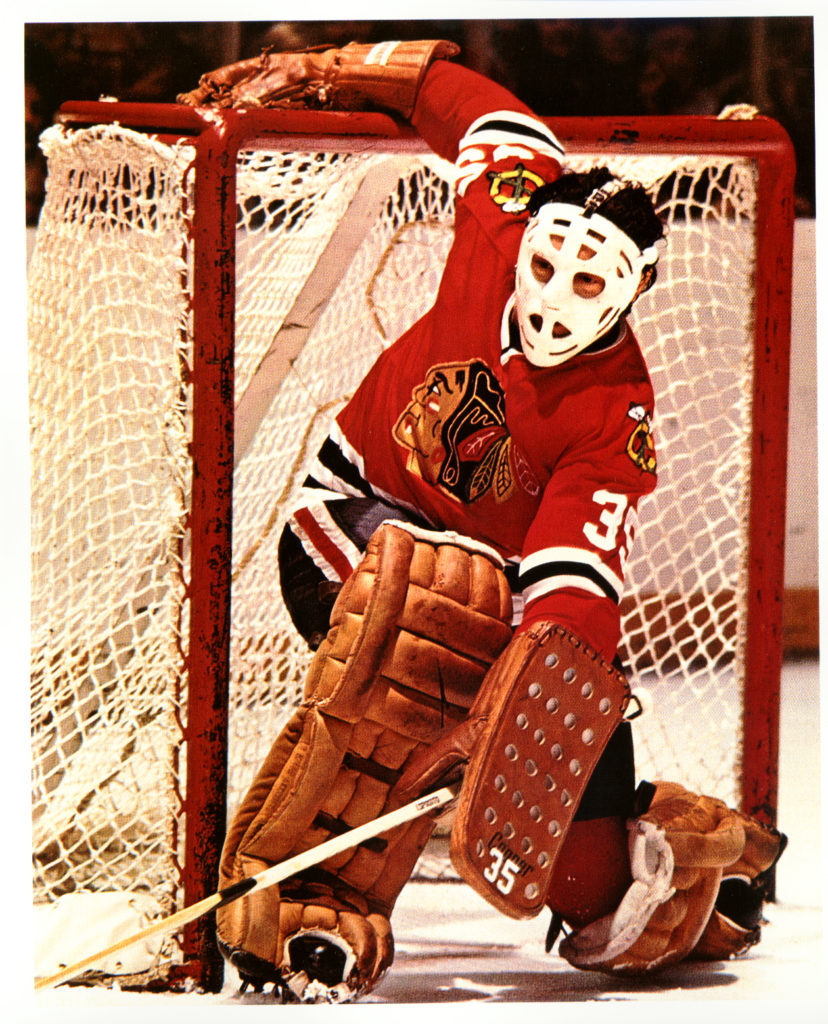 Tony Esposito’s jersey hangs in the rafters of the United Center, where he’s known as one of the greatest to ever wear the Blackhawks sweater.

He turned pro with the Vancouver Canucks after graduation and played for both the Houston Apollos and the Montreal Canadiens in 1968-69, his first year in the NHL. He made his first start with the Canadiens against the Boston Bruins, then led by his older brother, Phil. Tony made 33 saves and Phil scored both goals for the Bruins in the game that ended in a 2 – 2 tie.

The Black Hawks (changed to one word, Blackhawks, in 1986) claimed Tony from Montreal on waivers at the end of the 1969 season, and he had the first of 15 spectacular years in Chicago. He posted 2.17 goals against average (GAA) and set a modern-day NHL record with 15 shutouts. He won the Calder Memorial Trophy as the league’s best rookie and the first of his eventual three wins of the Vezina Trophy as the NHL’s best goaltender — the first rookie to win it since 1946. (Incidentally, Tony is one of only eight Vezina winners who caught the puck right-handed.)

He came in second for the Hart Trophy awarded to the league MVP and earned the nickname “Tony O” for his 15 shutouts that broke a record set in the 1940s and still stands today, 46 years later. The Black Hawks made the playoffs every one of the 15 years Tony was on the team, and he quickly gained a reputation as the fastest glove hand in the game.

Tony was the first goalie to win a game against the Soviets, playing for Team Canada in the Summit Series in 1972. In 1977, he represented Canada at the Ice Hockey World Championship Tournament. In 1981, he became a naturalized American citizen and played in the Canada Cup for the U.S. national team.

In 1981, Tony followed his brother, Phil, as president of the NHL Players Association, a position he held until 1984. By then he was the oldest player in the league and the only one over 40.

“Sure, I had injuries — cracked ribs, broken toes and a separated shoulder,” he says. “But in those days, you were expected to play through them, and I did.”

Tony was the first NHL goalie to wear number 35, which was retired by the Black Hawks after his retirement in 1985. In 1988, both Tony and Phil were inducted into the Hockey Hall of Fame, and both were named to The Hockey News’ list of the 100 Greatest Hockey Players — a list spanning the game since 1926.

After the 1989-90 season as director of hockey operations for the Pittsburgh Penguins, Tony joined Phil in retirement in St. Petersburg. They were sitting in Tony’s little office one day in 1990, discussing the NHL’s plan to add two expansion teams. “I remember my brother and I looked at each other and said, ‘This is our organization,’” Tony reminisces. “There was no hockey team anywhere in the south in those days and many people doubted that one could ever be successful there. I don’t know how we put it together. I guess lots of spit and glue, because we didn’t have much money, no players, no building to play in. We started with nothing.”

However, they found financial backing, and their bid was successful. Phil took over as president/PR man with Tony as head scout. “For 18 months,” he says, “I spent two weeks on the road and a week at home, watching games, seeing who the good prospects were in the minors and picking our team. We had to do it all ourselves until we got a few other people involved.”

Back in St. Petersburg, Phil was attempting to scrounge up money. Marketing themselves as Hall of Famers, the brothers arranged to appear in up-scale bars three days a week when Tony was home from the road, attracting possible backers to meet, greet, take photos and have posters signed. It was a good plan all around — no admission fee and extra business for the bar.

The new team got some of the players they’d hoped to in the 1993 draft, but not a standout goalie, as each team was allowed to protect three from the draft. The team name, Tampa Bay Lightning, came to Tony and Phil during a thunderstorm.

The team’s first year, they posted what Tony calls a “respectable record,” and by 2004, the Lightning beat the Calgary Flames to win the Stanley Cup. The Esposito brothers left Lightning management in 1998, but Phil serves as their PR ambassador, the same position Tony has held with the Blackhawks for 15 years.

And why is all this hockey history relevant to Door County? After lots of wear and tear and the demands of years of playing, Tony asked a friend in the travel business in Chicago to find him “a quiet place where I won’t be recognized.” She immediately said, “I know the perfect spot — Gordon Lodge in Door County.” Tony and his wife, Marilyn, drove up for three days and loved it. “As soon as we left Sturgeon Bay,” he says, “I felt at home. It reminded me so much of the scenery around Lake Superior, where I grew up in Ontario.” 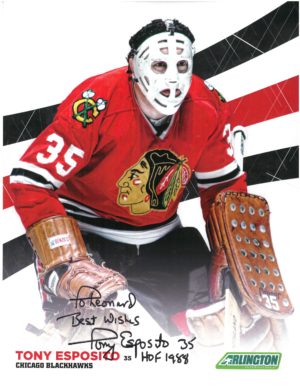 The “won’t be recognized” part, however, got off to a funny start. When Tony and Marilyn walked into the Top Deck Restaurant on the first evening of their stay, the first person they saw was the head of sports programming for WGN-TV/radio that broadcast the Blackhawks’ games. He and his entire staff were there for a conference.

Nevertheless, Door County had Tony’s heart and in 1984, he and Marilyn bought a home in “suburban” Baileys Harbor. “Some years I was only able to be here a week or ten days,” he says, “but I always keep the heat set at 50 so the house is ready for us to come any time. People are so nice here.”

Although he leads a quiet life, many of the people in and out of Baileys 57, where the interview was held, greeted him and came over to chat.

In the world of hockey, he’ll always be remembered as the Hall of Fame’s official site describes him, “a legend — one of the true pioneers among net minders in the NHL.”

As half of perhaps the most colorful brother act in NHL history, Tony O revolutionized goaltending in the NHL with his legs-open ‘butterfly’ style and his spectacular flop-on-the-ice saves during the 16 years he spent in the league.

In Door County, he’s just Tony, as he prefers.