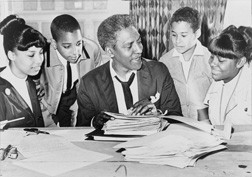 It’s almost sacrilegious to say that Black History Month should be about more than Dr. Martin Luther King, Jr. Indeed, it’s like turning our back on Old Glory, Uncle Sam or Mount Rushmore. But King has come to so dominate our observation of these days in February that he crowds out everyone else. And that is a shame, because there is so much more to the history of African Americans than the Nobel Laureate and “I Have a Dream” speech author. There are men and women who helped make King “King,” people without whom the Georgia minister would not have become the iconic figure we revere today.

One of those people was standing a few feet to King’s right on the steps of the Lincoln Memorial on the afternoon of Aug. 28, 1963, as he delivered his “Dream” speech. Fittingly, he was just out of camera range. His name was Bayard Rustin, and if you haven’t heard of him you’re not alone.

Rustin (1912-1987) spent much of his career in the shadows, shunned by many in the civil rights movement he did so much to advance. It is not difficult to see why. Rustin was once a communist. He was a draft resister who had refused induction during World War II and served time in federal prison. He was a homosexual who had been arrested and jailed on what was known in the 1950s as a “morals offense.” 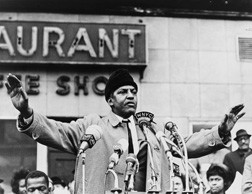 But when King needed someone to organize the mammoth undertaking that was to be the March on Washington for Jobs and Freedom – to publicize it, to obtain the necessary permits, to put together a program, to get 250,000 people in and out of the Mall area safely and peacefully, and even to dictate the order of speakers (with King’s appearance wisely saved for last) – he turned to Bayard Rustin.

This was because Rustin, 51 years old in 1963, had been preparing for this moment his entire life. A native of Pennsylvania, raised by a Quaker grandmother, he became an activist for peace, labor rights, democratic socialism (after turning away from communism as a young man), and most propitiously for King, civil rights. As the modern civil rights movement developed, Rustin had been present at every important turn. He had participated in the first attempt to desegregate interstate buses in the South as part of the “Journey of Reconciliation” in 1947. He had tutored King in the techniques and philosophy of nonviolent direct action during the Montgomery Bus Boycott of 1955 and 1956. He had helped found the Southern Christian Leadership Conference, the organizational arm of King’s nonviolent activism, in 1957.

Rustin, then, was King’s indispensible man as he planned the largest and most important demonstration in American history in 1963, one on which the fate of the civil rights bill introduced by President John F. Kennedy earlier that year largely hinged.

And Rustin pulled it off. A detail-oriented organizational genius, he had the foresight to ban mayonnaise from the sandwiches distributed to marchers in the Washington summer heat and to calculate the appropriate number of portable toilets for the rally site. By the time King ascended the speakers’ platform at 3:30 on the afternoon of Aug. 28, 1963, Rustin had already made the day a success. King’s speech made it history.

Thanks in large part to it, the Civil Rights Act of 1964 and Voting Rights Act of 1965, the egalitarian legislative landmarks of the 20th century that redeemed the promise Lincoln’s Gettysburg Address made in the 19th, became law. They were Rustin’s achievements as much as they were King’s. A gay man limited by the prejudices of his time to a role outside the historical limelight, he nonetheless made history of his own. And last year, on the 50th anniversary of the March on Washington that he made possible and a quarter-century after his death, Rustin finally received the recognition he deserved when he was posthumously awarded the Presidential Medal of Freedom, our nation’s highest civilian honor. Bayard Rustin’s consequential life exemplifies the breadth and depth of African American history that we miss when we are blinded by the presence of our greatest – but not only – civil rights leader. Let’s use this month to bring Bayard Rustin, and others like him, out of King’s giant shadow.

Jerald Podair is Professor of History and Robert S. French Professor of American Studies at Lawrence University. He has authored or edited four books on modern American history, including Bayard Rustin: American Dreamer (Rowman & Littlefield, 2009), and is the recipient of the Allan Nevins Prize for “literary distinction in the writing of history.” He is the recipient of Lawrence’s Award for Excellence in Scholarship and its Faculty Convocation Award.