If you were to drive down South Main Street in Oshkosh, you would never know The Peoples Brewing Co. once stood on the lake side of the 1500 block.

You won’t find a sign or plaque, nothing to indicate that on this site once stood a historic brewery that made a certifiably good American lager – Peoples Beer. And there is very little anywhere to remind anyone that for a moment in the early 1970s, Oshkosh was home to the first African American-owned brewery in the United States.

Peoples was founded in 1911 by a group of Oshkosh businessmen who obviously believed the city needed a third brewery. Rahr Brewery had been operating since 1865, and Oshkosh Brewery had been around since 1866. The 15,000-barrel capacity Peoples Brewing Co. went up in 1912, across the street from the Oshkosh Brewery on South Main Street. The name reflected the founders’ intention of selling brewery stock to the people of Oshkosh and surrounding farming communities, thus, The Peoples Brewing Co.

Fast forward to 1969 when a group of Milwaukee businessmen calling themselves United Black Enterprises (UBE) bid $9 million for the Blatz Brewery in Milwaukee, at the time a subsidiary of Pabst, the No. 2 beer in America. Federal anti-trust action forced Pabst to make the sale.

In submitting the bid, the UBE included a two-page document that emphasized the outsider nature of the effort – pointing out that not only was the group the only bidder in this anti-trust action without brewing industry ties, but it was an African American attempt to enter a traditionally white industry.

“Our obvious sincerity and fund-raising ability has begun to change the attitude of many persons who viewed this venture as ill-conceived and too far reaching,” the bid submission states. “They realize as we have maintained steadfastly that he who waits 400 years for ownership and control of a major corporate industry must be serious and deserves to be heard.” 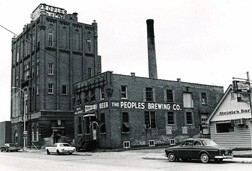 The Blatz brewery eventually went to G. Heileman of La Crosse for $10.8 million. Some of the same men who formed UBE, including chairman Theodore Mack Sr., then set their sights north, on The Peoples Brewing Company in lily-white Oshkosh, Wis.

Like much of the rest of the nation at that time, Oshkosh was struggling with racial issues. On Nov. 21, 1968, 94 black students at the University of Wisconsin – Oshkosh protested their lack of identity on campus by occupying the administration building in an incident that has come to be known as Black Thursday. The students were arrested, herded into a U-Haul truck by police, and punished with fines from the city and expulsions from the university system. The black student population in Oshkosh suddenly went from more than 100 to nine.

In that environment, Mack, who had worked for Pabst, boldly announced that not only was he going to run Peoples Brewery, but he was also moving his family to Oshkosh.

Mack and his business partners bought the brewery in the spring of 1970 for a reported $365,000, plus $75,000 for the existing inventory. A $390,000 Small Business Administration loan helped secure the transaction.

Trouble started in the form of vicious rumors that blacks from Milwaukee would replace the brewery’s 20-some white workers, and that the recipe for the beer was changed and cheapened.

“When the going gets rough, I send me,” Mack was fond of telling reporters.

Mack called a press conference for April 27, 1970, to squelch rumors that he was going to fire the brewery workers and replace them with blacks, and that he was going to turn Peoples into a ghetto beer, like the Black Pride beer that was being contract-brewed at Lithia Brewing Co. of West Bend for a group of black entrepreneurs in Chicago.

“I want to get away from the blackness and the whiteness,” Mack told reporters. “I don’t believe in black power, and I don’t believe in white power. There is only one power in this country. That’s green power – money.

“I want to be happy here making beer,” Mack said.

“Myself and Oshkosh are going to be very much on the spot,” he said. “This is regarded as one of the most bigoted cities in the country, north or south. If sales are down, it will be a black eye on Oshkosh, not me.”

In a story published in the Oshkosh Northwestern on July 30, 1970, Mack was asked how it felt to be the first black to manage a brewery in America.

“I have an ambivalent feeling about this,” he replied. “Many blacks could have done it before now, but they haven’t had the opportunity.”

Despite Mack’s heroic effort to dispel rumors and put the city’s mind at rest that the revolution was not coming immediately to downtown Oshkosh, sales of Peoples Beer plummeted to an all-time low. Bars that had carried Peoples for several generations stopped ordering it.

Finally, tired of the accusations that the recipe had been cheapened, Mack sent a sample to the respected Siebel Institute of Technology in Chicago, where Peoples passed with flying colors.

“Makes an exceedingly good impression in almost every respect,” reads the report, which Mack shared with stockholders and the public.

Mack later reported that all but two of the dropped tap accounts in Oshkosh reinstated Peoples Beer.

The brewery went idle in the fall of 1972 due to tax liens, and the building and its contents were seized by the Small Business Administration for the defaulted loan.

In early 1973, Mack unveiled a six-page proposal he and his board of directors had come up with to resume brewing operations. Along with operating and ad plans for the start-up, the document included the philosophy behind the group’s desire to make the brewery work.

“For the first time in its history, America finds itself confronted by an energetic group of Black men who are determined to move their people into a position of equitable participation in the productive and distributive aspects of its economy,” it states.

“The ownership of a major brewery presents opportunity of such magnitude. It will be a substantial step toward transforming the Black man into a producer as opposed to merely a consumer.”

But by then it was too late.

Small regional breweries were dropping like flies across the country, squeezed out by cutthroat competition from the megabrewers – Anheuser-Busch, Pabst and Schlitz were the big three at the time.

One commentator mentioned that buying a small, regional brewery in the early 1970s was like buying an ice company after the introduction of refrigerators.

When production stopped at Peoples, it joined two other state breweries – Lithia Brewing of West Bend (contract brewers of Black Pride beer) and Potosi Brewing – in not seeing in 1973.

Ted Mack was beginning to see nefarious intent toward the end, and believed that the industry, in collaboration with the government, was conspiring to make Peoples fail by squeezing the brewery out of lucrative government military contracts it had expected as a unique minority business.

Shortly after production was stopped at the brewery, Mack told the Milwaukee Journal that beer making would not resume at the plant “until the Small Business Administration makes good on its promise to give us a fair proportion of government contracts.” 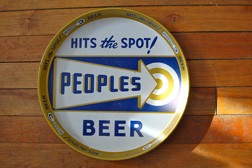 Mack also wondered at the failure of Peoples to catch on in the black metro markets. The prospectus offered to potential Peoples stockholders clearly stated the brewery’s expectation to enter the black market.

“The company intends to develop a market within the black communities in major population centers. A slight shift in consumption to the People’s Beer brand would result significantly in improved sales.”

But it never happened.

“I believe the time has come when blacks must realize they have to help themselves,” he told the Milwaukee Sentinel. “If they wait for the white man to do it, they will wait ‘til doomsday.”

Mack seemed aware of the dinosaur nature of small breweries. In a June 1972 SBA form he filled out requesting business counseling, he noted in the area marked greatest problem in business operations, “Downward industry trend in small breweries.”

Shortly before the brewery doors closed forever in the fall of 1972, Peoples filed a $100 million lawsuit against the SBA Administrator Theodore Kleppe and Secretary of Defense Melvin Laird. “We were grossly deceived by the federal government and we are suing on that basis,” Mack said of the lawsuit, which was eventually dismissed.

The SBA took possession of the brewery in early 1973. In 1974 the insides of the brewery were sold in sealed bid for $24,250 to a Milwaukee junk dealer, who six weeks later auctioned off the equipment for about five times the purchase price. Most of the brewery was demolished the summer of ’74. Since 1976 Blended Waxes has conducted business in a sprawling, utilitarian building on the former brewery site. Loading docks in back and the brick-faced former brewery business office in front are the only remnants of Peoples Brewing Co.