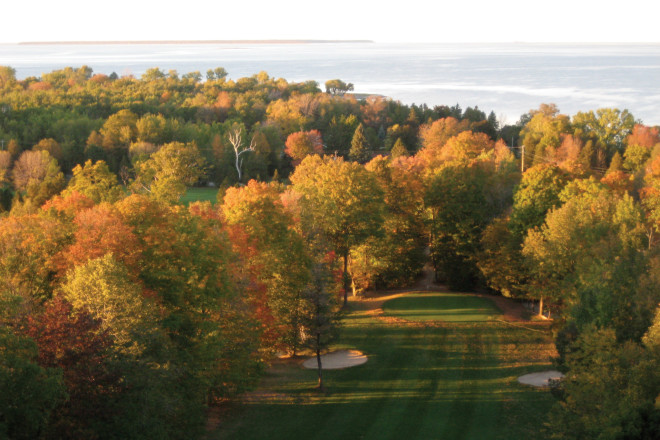 Photo courtesy of The Alpine Resort.

It takes awhile before Door County’s bay side forces you to ride the brake pedal. Once across Sturgeon Bay’s bridges, there are about 17 scenic miles along Green Bay waters before Horseshoe Bay Road winds east and west.

Without the landscape-forced hesitation, it would be easy to drive right by the Alpine Golf Course, and in that, one of the finest golf features in the county:  the Black Nine. 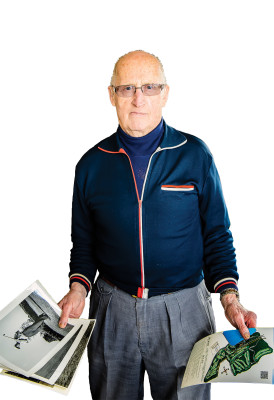 The youngest of four sibling nines, the Black Nine was added in 2002 to three nines already in place (Red, White and Blue). It’s only a piece of The Alpine golf puzzle near Egg Harbor, but of the four, it’s the only one mentioned in every online review of the course. For some reason it sticks out.

It could be the youth that separates the Black Nine in golfers’ minds, but now already 12 years old, it doesn’t appear any younger than its brothers. The main reason why the Black Nine is always mentioned is it’s always the most memorable, and that wouldn’t be the case without the vision of Bill Bertschinger.

Bertschinger, at 86 years old, is likely Door County’s longest tenured worker. He’s worked at The Alpine Resort for 74 years now and is still chugging along.

“I’m a workaholic. I love to work,” he says, adding that he’s “no spring chicken.”

Always at the same place and always with the same lifestyle – it’s all Bertschinger has known (his dad and uncle built the resort). He eventually had his say, however, managing the resort from 1960 to 1992 before passing management on to his two daughters, Emily Pitchford and Cindy Livingston.

Though he stepped away from his managerial role, Bill was far from his last days as a worker. It was around then that he made his most important addition to The Alpine by envisioning the Black Nine.

He saw the three nines withstanding, each of them extending away from and returning to the classic white and tan clubhouse. In that, he saw a fully functioning club, which was great, but not good enough. He also saw some land on the eastern corner of their property that was unused. In that, he saw green, in more ways than one.

“I thought instead of just paying taxes, it should have some income,” Bertschinger said. “That was the catalyst that got it started.” 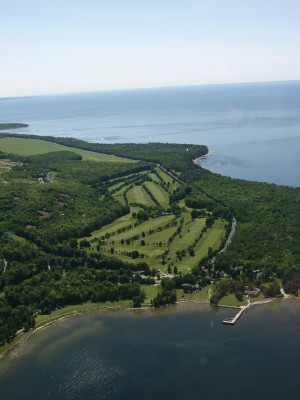 He saw a county that was growing in prominence and wanted a fourth nine ready by the time it would become a popular golf destination. It’s a tremendous task, however, building a golf course essentially from scratch. It’s almost unthinkable when considering Bertschinger’s limitations.

The land he needed was constantly changing hands – so much so that he was only able to finally wrangle his desired amount through a combined purchase with another buyer.

Furthermore, he had the Department of Natural Resources paying close attention. Bertschinger wanted to use the bluffs and elevation to create charming views of Green Bay. If only they knew how simple his tactics were. All he wanted was a golf course, nothing more. Hoofing his way up and down the escarpments, the Black Nine began to take shape.

“I got up there and that baby was burning so nice and bright,” he continued. “I thought, ‘Here we go. Build the Black Nine.’”

And so he did. With the help of one bulldozing crew to clean the bailed out rocks from the bluff, and a couple hardworking friends in Bill Anschutz and Bill Warwick, an up-and-down-the-bluff nine was created. 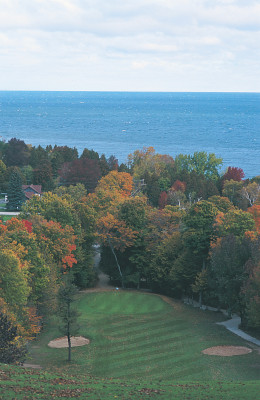 The first three holes take golfers near Green Bay waters, at water level, handicapped as numbers 6, 7 and 8, respectively, for a breezy start to the nine, in more ways than one with the wind careening off the waves. From there it’s up the bluff for the final six holes, five of them making it the toughest of the nines. At least in Jocko Rader’s mind.

Rader, 82, has been golfing in Door County for about 50 years. In those bluff-top holes he sees a daunting slanted fairway and a pair of par-fives that will test any level of golfer. More than their difficulty, though, he sees the views as the best in the county.

The course finishes with a dinky 98-yard pitch with a 100-foot elevation difference. Modeled after a similar par-three at Peninsula State Park, it’s a fun little finisher to a memorable track, bringing the golfers back to Livingston or Pitchford waiting in the clubhouse.

Pitchford, now much more in control of the resort than her father, noted it took the Black Nine some time to climb the popularity chart. Revisiting players were comfortable with the three nines they knew, so it took awhile for word to spread on how beautiful the Black could be.

But now it’s a given; players who want to play 18 are sent to play the Blue Nine, followed by the picturesque Black. Those unforgettable views, commonly accented by a setting sun, can make any round pretty, but the trees and danger lining the sides can make it pretty ugly. Again, a creative vision was behind it. 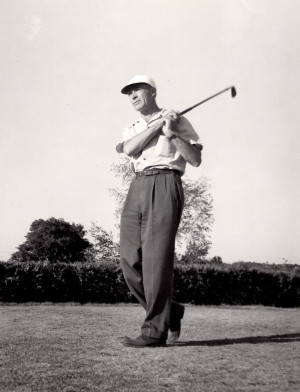 “I did toy with the idea of black and blue, like you’ve been beat up,” Bertschinger said. “But that’s just the way it worked out.”

Clearly, the Black Nine is his baby, so to say, and Bertschinger is still parenting it. He now handles the course maintenance and outdoor operations at the resort. In the end, he wanted to make some extra money and give Door County golfers something to ogle at.

“I’ve seen it when it was woods. You’d have never imagined it would become a golf course,” Bertschinger said.

“Some people have ponds, and we do, too,” he continued. “But nobody has a bay like The Alpine.”

Photos courtesy of The Alpine Resort.