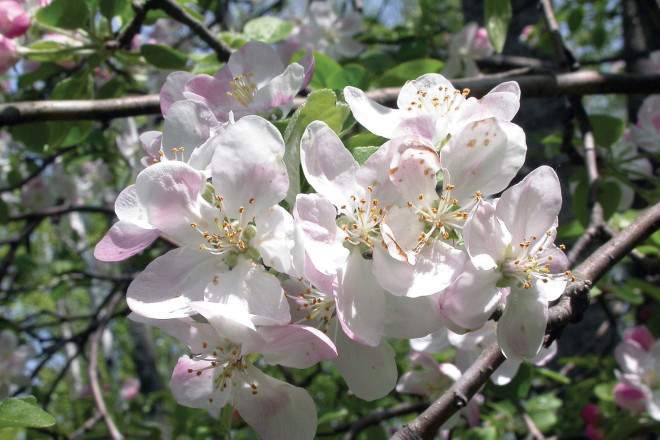 Relatively few people realize that all trees produce flowers. Trees require flowers in order to produce seeds, simple as that. Most people can see and recognize apple and cherry blossoms. However, birches, maples and elms, whose blossoms are wind-pollinated and don’t require the help of insects for transferring pollen, have very inconspicuous flowers that are best seen and enjoyed with a magnifying lens. For example, spectacular flowers form each spring or early summer on the Horse-chestnut and Oriental Mountain Ash trees; neither is native to our continent but quite widely planted because of their great beauty. 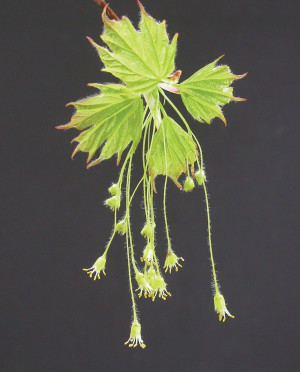 Flowers of shrubs tend to be more noticeable than those on trees. Even though most are quite small, they grow closer to the ground and are more easily observed. Unfortunately some of the most abundant shrubs, some even quite fragrant, are included with the worst invasive and undesirable plants ever to reach our county. Included with the highly detrimental species are Tartarian Honeysuckle, Autumn and Russian Olive, and the Multiflora Rose. These plants produce copious amounts of small fruit which are attractive to birds and, consequently, are easily spread far and wide in their droppings.

The great value of wild bees cannot be overstated, and a widespread native tree, like the Basswood, or Linden, produces extremely fragrant and very attractive flowers. During blossoming time in early summer these tall trees attract and help feed swarms of wild as well as commercial honey bees.

There are two species of Elder, both in the genus Sambucus (sam-BYU-cuss), which are worth knowing. One, the Red-berried Elder, is widespread and very ornamental. Even though its highly visible clusters of red fruit are not edible for people, as they are for birds, the shrub is fast growing and easily maintained. We’ve enjoyed the shrub growing in our front yard for many years.

The Common or Canadian Elderberry is a low-growing shrub with attractive clusters of small, dark, highly edible fruit safe for human consumption. They favor edges of wet swamps or woods with rich soil. Delectable jams, pies and wine can be made from the fruit, if you can beat the birds to them. 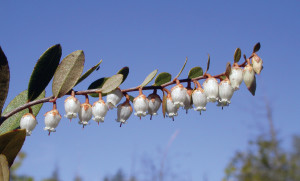 Two native and widespread shrubs rank among our favorites for their intricate shapes and also their unusually early blossoming time. No sooner has the snow melted when we begin keeping track of the flower opening of the Canada Buffaloberry and the Leatherwood or Moosewood. Because both are common on our property, there have been past winters, snow still covering the ground, when I have cut several foot-long twigs from each of the shrubs, taken them indoors, put them into small vases of water and placed them in a sunny window. The blossoms would open within 10 days or so to bring our private touch of spring season into bloom a month earlier than normal.

There are two relatively tall native shrubs, sometimes referred to as small trees, the Pagoda or Alternate-leaved Dogwood and the Witch Hazel that grow in Door County. While the Dogwood’s flowers are somewhat inconspicuous, the incredibly attractive overall shape and manner of growth has made this large shrub highly favorable for landscape planting. 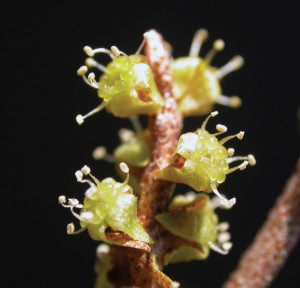 What’s so unusual and beautiful about the Witch Hazel is its unbelievably late flowering, when every other known wild flowering plant is finished. In fact, there are times when many of the deciduous trees have already dropped most of their leaves before the Witch Hazel helps beautify the fall landscape. Nurseries handle both the Pagoda Dogwood and Witch Hazel and they are easy to grow. You will find more Witch Hazels doing well, sometimes growing as a common understory plant, in southern Door County woods.

The topography of Door County, a few hundred feet above lake level on the west side, tapering down to lake level on the east, provides excellent and varied growing conditions for trees and shrubs. A fairly accurate list includes 30 native deciduous shrub species, 32 native deciduous trees, 10 native coniferous trees and two native coniferous shrub species. To this list can be added at least nine introduced deciduous trees and four introduced conifers. Surely there are other non-native shrubs, especially used in landscaping, which are not included. 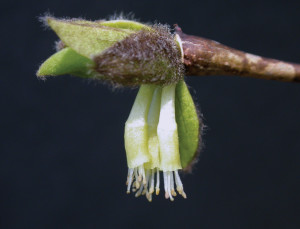 What great fun it is to cruise the back roads in search of trees and shrubs in flower, often quite easily observed from the car. Perhaps the earliest we find in early April, and also one of the tiniest and most colorful is that of the Beaked Hazel. Come early May we head for a site along County Highway Q, east and north of Baileys Harbor, where surprisingly good examples of bog plants line the road in a few places. My favorite is the Leatherleaf, a very hardy bog plant usually no taller than two feet. What gorgeous strung-bead-like blossoms they have. Knee boots are needed to get close to these plants.

Both the Black Cherry and Choke Cherry come into flower in early June. They command one’s view from a block away and may require a field guide, such as the Peterson Field Guide:  Eastern Trees, to sort them out. At the same time you can expect to see a great favorite, the Serviceberry, also called the Juneberry or Shadblow, liberally decorating many roadsides where it seems to do very well. This plant and the Ninebark shrub were two favorites of the famous Jens Jensen, of The Clearing Folk School, who advocated their planting throughout the county. Both are native.

A very important fruit-bearing native shrub, the Highbush Cranberry, is widely scattered throughout the county and blossoms around mid-June. Fruit ripens later in summer and, especially in late fall or early winter, may serve as an emergency plant for migratory and native birds including the Cedar Waxwing and Ruffed Grouse. The ring of large, white, sterile, so-called target or “advertising” flowers surrounding the cluster of tiny true flowers which produce the fruit, are useful only in attracting insects to perform the pollinating. 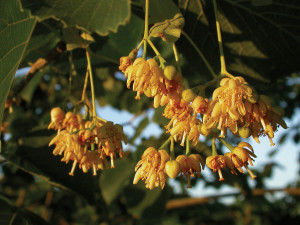 The lists of native plants and nesting birds of Door County rank near or at the top of all Wisconsin counties. Included with the plants are the many trees and shrubs whose fascinating flowers deserve a closer look.