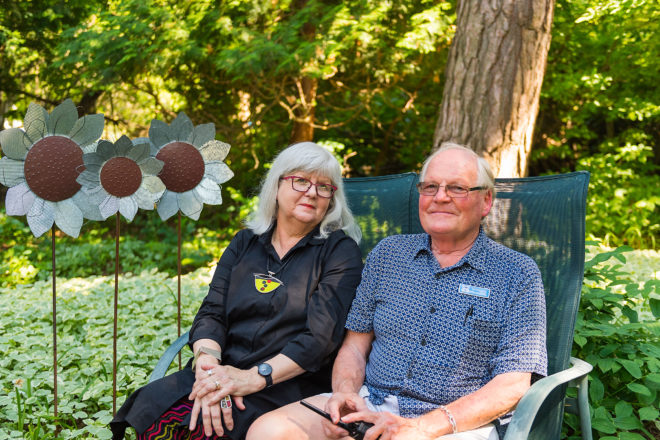 Peg and John Lowry sit snug on a bench in the gardens between Blue Dolphin House and BDH Studio in Ephraim. Hostas line the well-used path, windchimes sing lazily in the summer breeze, and art is everywhere – copper mobiles whirl, a rainbow of swirly glass rods poke from plants, and stoneware turtles rest on the garden’s edge. It’s a bright, colorful, beautiful scene – and that’s just the garden. The galleries hugging the garden contain an even greater array of carefully curated art and home décor items – watercolors, jewelry, wood carvings, photography, ceramics, clothing, blown glass and more. No dolphins, however, though some “kids ask where the dolphins are,” said Peg, laughing.

The inspiration for the name comes from a favorite jazz song of John’s – “On Green Dolphin Street.” He started the gallery with his artist mother Amy 50 years ago, after ten years in the restaurant business.

“The same problems that existed back then exist now,” explained Peg. “[John] couldn’t get enough help, so that’s when he decided to get out of the restaurant business and go into the shop business.”

Amy recruited artists to show their work in what is now the Door County Confectionery in Ephraim. “It was small,” said Peg. “The back section was the gallery, the front section was the shop.” During this time John was teaching social studies full time in Kohler and became active in community theater in Manitowoc, where he met Peg, an art teacher. They married in ’71, lived in Manitowoc, taught in Kohler, and operated the gallery in Ephraim.

“It was a little crazy,” said Peg. “We also had a custard stand that was right next door to the shop. We would open at ten, close at noon, open again at two and close at five, open again at seven and close at nine because all of the hotels were European plan, so there was nobody out and about during those hours; they were all eating somewhere.”

The couple had a little barbeque and picnic table behind the shop. “We’d sit out there and have our dinner and then go back to work,” said Peg.

In ’75, Peg resigned her teaching position to focus on the shop full time, they even opened another Blue Dolphin House in Manitowoc. 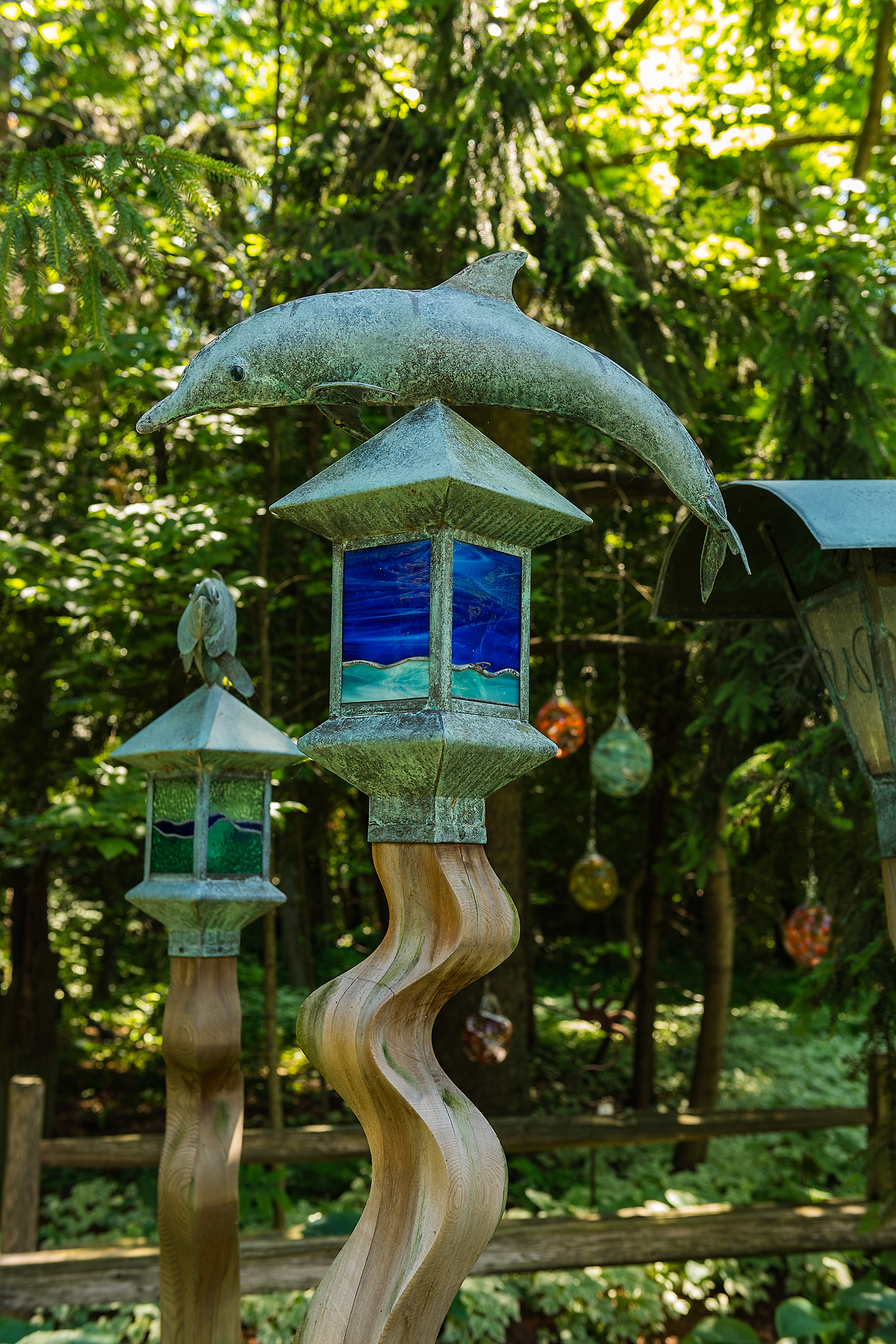 “Those were hectic years,” said Peg. “Back and forth. We had the merchandise come in down there because it wasn’t as busy and it was easier to get processed. On Friday one of us would drive our Volkswagen bus up here and put it out on Friday night and go to work on Saturday morning.”

Soon the couple realized they needed more space and more time to focus on the business. John retired from teaching in ’79 and in ’82 they purchased the present location of the gallery – 4.5 acres of land with a large farmhouse and garage. They moved in upstairs, closed the Manitowoc location in ’84 and made Door County their permanent home.

The key to their success seems to be persistence, commitment and “not knowing when to quit,” said John.

“I think that’s kind of it,” said Peg. “There were lots of times when we probably should have. It became a way of life. It’s what we do. We still haven’t figured out if there’s an endpoint.”

“And we still enjoy it,” added John.

“It’s become our life. We don’t have children, this is our child. Other than Skye, the dog upstairs,” said Peg.

They also have loyal customers and about 100 professional artists who trust them to display and sell their work.

“We have a group of about six or eight people who have been with us since day one,” said Peg. “They’ve all gone up in the ranks of art as far as their abilities and the awards they’ve won. We’ve always had a good relationship with them. A lot of people that we purchase from are people we’ve known for years.”

The couple have also mentored many artists, guiding them into the world of retail, and giving them their professional start.

“Judi Ekholm started with us,” said Peg. “Kathy Glasnap was with us for years. In the early years we had Chick Peterson. There’s some people that went on to do lots of things.”

Though art keeps Peg busy in work and leisure – she teaches at The Clearing and wears jewelry she creates in her spare time, John stays active in the local government. He is currently the chairman of the Liberty Grove town board. He’s also been the village president, acted in Peninsula Players productions, helped kickstart the new Northeast Wisconsin Technical College’s Learning and Innovation Center in Sister Bay, and officiated many high school football and basketball games.

“He’s been in something all the time,” said Peg. “It gives me one or two nights a week to watch what I want.”

In the meantime they’ve fostered an oasis of art, surrounded by knowledgeable staff and a light atmosphere. They don’t seem to take themselves too seriously. Case in point – when asked what the most rewarding aspect of owning such a successful gallery is, John quipped, “Going home at night!”

“The customers,” interjected Peg with a smile. “There are people that are just so nice.”

They reflect on what’s to come, what changes the gallery might see in the next 50 years.

“Somewhere along the lines we’ll have to make some decisions, but I don’t know if we’re ready for it yet.”