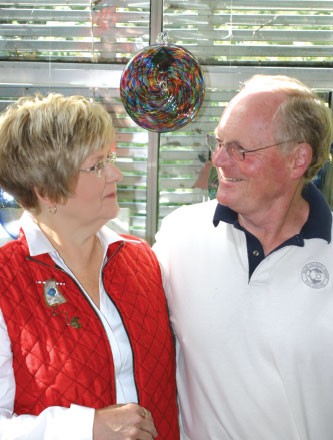 Having a successful business, retail or otherwise, is never an overnight process. In order to succeed, you have to be patient, determined, hardworking, in the right place at the right time, and, if you are lucky, you have a strong partner with whom you can share the whole process. Peg and John Lowry, of the Blue Dolphin House, have these qualities in abundance.

They have been part of the Door County retail scene for over 36 years now. In addition to the Blue Dolphin House, they also own the BDH Studio and Gardens, which are popular extensions of the main store. Their loyal customer base has followed their transformation from the early days, when the store was located at the south end of Ephraim, into one of the biggest shopping destinations in Door County. “We are always changing. Our customers expect it,” explains Peg. John adds, “It has to be about keeping it fresh. In order to thrive in a retail business, you have to be constantly on the lookout for new things that your customers will want.”

Their vision for the store has gained national attention. Nominated as one of the Top 100 Retailers of American Craft every year since 1997, this year the Blue Dolphin House finally earned that distinction. They are the only store or gallery in the state of Wisconsin to be listed in the top 100. More than 26,000 craft artists throughout the U.S. and Canada were polled for the list of stores to be compiled. The criteria listed by the organization included “treating artists with courtesy and respect, paying on time, promoting and marketing American crafts, contributing time and energy to the craft community, as well as mentoring emerging artists.” Between 650 and 800 galleries, retail stores, and museum shops are nominated every year. Being selected is a reflection of all the long hours Peg and John put into making the store what it is. They were also named one of Wisconsin Trails’ Top Specialty Stores in Wisconsin. Peg and John were thrilled to be recognized for their accomplishments. Peg comments, “Running a store is very involved. For us, each new season feels as though we are starting over.” It is this spirit of reinvention that keeps the store exciting for them as well as for the people who visit.

When they are not working, Peg and John try to enjoy some of the same things that lure tourists here. On their days off, they take their motorboat on short excursions up to Washington Island and other destinations close to home. Sometimes they just unwind on their deck and look out over the bay. Peg explains, “It has taken a long time, but I’m finally starting to take some moments for myself.” This includes some recent time spent at the Peninsula Art School where Peg took courses in silver and oil painting. Perhaps they do not have the same amount of free time they had as younger visitors to the area (John started coming here when he was six and Peg visited during high school); however, they prefer living and working in such a beautiful location.

One of the myths about Door County is that business owners have to work very long hours during the season, but that they have the whole winter to do nothing but relax. Peg and John claim that this is not the case for them. They use the winter to gear up for the next season. Attending five tradeshows a year and handling 24 consignment artists and over 200 vendors takes a lot of planning and coordination. In 32 years of marriage, they have honed their teamwork skills. When asked if working together and living together ever got to be too much, John jokes, “No, as long as Peg does what she is told.” After a wry, yet patient, smile, Peg adds, “During the first couple of years, it took us awhile to figure out the division of labor. Now John and I have our roles. He handles the behind the scenes bookwork and maintenance and I handle the store.” It does seem to be a very agreeable arrangement. Standing in the garden gazebo between the stores with the wind blowing through the chimes, it appears as though they have created a perfect setting in which to spend all their working hours together.