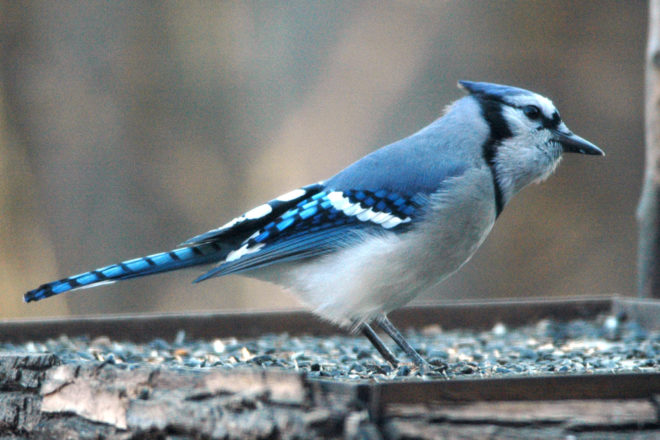 A blue jay crams as many seeds as he can into his gullet. Photo by Roy Lukes.

The Alarm Sirens of the Forest

I was reading in my quiet study at sunset when I heard the call of a great horned owl. I stepped onto the front porch in the dimming twilight and waited for it to call again. The voice came from the southern section of my 20 acres of woods.

Just a few days ago, I was filling the marvel-meal feeder and heard the raucous cries of many blue jays. A dozen came flying in from the east, and they all seemed to gather in a tall spruce tree at the western edge of the woods. I assumed they were mobbing a hawk or an owl.

A few days earlier, there must have been 30 crows flying around the woods to the east of the house. Each year at this time, they tend to gather in that section of the adjoining woods. They, too, were probably harassing a great horned owl – large predators that have nested in the 40 acres east of our land consistently for many years, often high in a beech tree.

The jays and crows are members of the corvid family, which also includes the raven and two western species: the nutcracker and the magpie. Blue jays are what some call the “alarm sirens of the forest.” If a great horned owl is hunting in the area before dark or just after dawn, these corvids pester the daylights out of the owl to make it move to another area.

Like the red-winged blackbird, European starling and common grackle, the blue jay is extremely adaptable and has, in a sense, welcomed the presence of humans. Changes in the environment that people have brought about have definitely favored the jays, particularly in their food choices. To watch a half dozen gluttonous blue jays at the feeders simultaneously – each one cramming seed after seed into its beak – is almost more than one human can stand.

Many people do not appreciate the jays at their feeders because they’re very dominant and seem to take all the food before the smaller, more timid species can get any seeds. The only birds that make the blue jays retreat are red-bellied woodpeckers and sometimes hairy woodpeckers.

This gaudy, foot-long slow flier is about 75 percent vegetarian in its diet. Possibly some of our present-day beeches and oaks were planted by the jays years ago because many of the seeds and nuts that this pilfering rascal hides are never eaten, whereas food such as sunflower seeds, corn and suet is readily consumed.

Agricultural experts of years past, especially around the beginning of the 20th century, placed great emphasis on establishing the economic importance of most wild creatures. In one study, 292 blue jays were killed in various parts of the eastern U.S., and the contents of their stomachs were carefully analyzed. The remains of songbirds were found in two of those stomachs and small birds’ eggshells in three. The researchers also found a preponderance of acorns, beechnuts, corn and pine seeds that were topped off with beetles, grasshoppers and caterpillars.

Many people resent the jays and accuse them of chasing other birds from feeders, hogging the food, robbing other birds’ nests and all sorts of other bad behaviors. Jays are, however, one of the many officially protected songbirds in our state, and it’s illegal to shoot them.

Many other people feel that the jay makes up for its bad reputation through its bright colors – always a welcome sight – and its great variety of songs and calls, which will continue to be some of our favorite music of the forest.

Other animals would soon miss the outstanding “watchdog service” and alarm calls about possible danger that jays provide. It was fewer than 20 years ago when the West Nile virus hit many of the members of the corvid family, killing numerous jays and crows in the Midwest.

Our area was not as badly affected, and it appears that the jays, crows and ravens are doing well in Door County.

During some years, the jays migrate to the south, but this year they’re staying here in big numbers. The abundant seed and acorn production of our native trees is keeping them in the area, as we observed during our just-completed Christmas bird counts. Great horned owls will just have to adjust to the alarm sirens of the forest – the pestering jays – this winter.