Robby Schiller of Blueheels records a track for “Weather Machine.”

Door County music buffs have been wondering, “What happened to the Blueheels?” The Neenah-based band known for their energetic live performances has been MIA for a while now.

“We would do over 100 shows a year,” explains guitarist Justin Bicco, who formed the band with lead singer Robby Schiller in the fall of 2004. “That doesn’t leave much energy for making music in the studio.” So the band took a “performing hiatus,” concentrating on their fourth album, Weather Machine.

“This is a really different animal,” says Bicco. “The press would always describe our music as Americana, roots and rock – that’s what we were pegged as playing. For Weather Machine, you’ll be straining to find that. This is twitching, experimental.”

For two years, the band would spend a few weeks in Madison, recording, arranging, and producing the new album at Blast House Studios. They would take a break and then return to record, arrange, and produce some more. 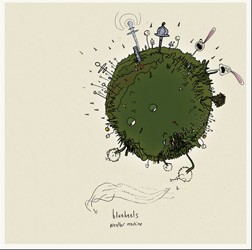 “This was the most collaborative effort,” says Bicco. “A lot of time was spent layering, experimenting. We would record, then basically strip the song and play with it. This was a really great experience. [Weather Machine] was something we wanted to work on without deadline or pressure, without distraction.”

With album in hand, the Blueheels are ready to take to the road once more and head up the Door Peninsula, performing Sept. 1 from 10 pm – 2 am at The Hitching Post in Valmy.

“We were introduced to [Door County] music venues by playing Steel Bridge Songfest,” explains Bicco, who notes the band’s fondness for The Hitching Post. Owners Mark McClellan and Amy Lucket “are incredible supporters of the band,” he continues. “I consider them great people, great supporters of music. They would have us up there playing in the dead of winter.”

When band members of the Blueheels discussed where to celebrate the release of their new album, “Hitching Post was on the top of the list,” says Bicco, who looks forward to playing for the live crowd.

“My favorite live music is when the band believes what they’re doing – music seems honest, performance is genuine, there is an energy between the members,” he says. “I hope people have a great time, they’re moved on some level, that it is an evening well spent.”