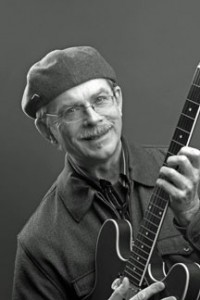 When Billy Flynn was a teen growing up in Green Bay and his friends were listening to Cream and Hendrix and the Allman Brothers, he was digging Bessie Smith and Elmore James and, especially, the Chicago bluesmen.

“After I heard the sound of the bands that were in Chicago, it was a real attraction to me,” he said. “It wasn’t such a loud, plodding rhythm section. It was more like jazz. And that was always the thing that attracted me about the real blues bands. They had a real swinging rhythm section, and not quite as loud, so you really could hear the guitars and the vocals real well.”

Flynn, the guitar phenom headliner at the inaugural Blues on the Bay being held at Community Park in Ellison Bay starting at 5 pm on Aug. 21, was introduced to Chicago blues at the age of 14 when he met players such as Jimmy “Fast Fingers” Dawkins, Jimmy Rogers and Andre “Big Voice” Odum at a Green Bay club called Clark Kent’s Super Joint.

“That place was pretty wild in its day,” Flynn said. “All the walls were painted like Superman comics. This is how heavy this place was. Later, the artists and people who designed it went on to work for Star Wars. There was something in that place, a really heavy vibe. It was such a great thing for me to meet these guys and they were so encouraging. Big Voice Odum sang just like BB King. He asked me to come to Chicago and record with him, but I was so young I didn’t really know how to pursue that. That was at 14 years old, so I go way back with the Chicago blues.”

Flynn’s ability on the guitar and his reputation for being an all-around nice guy have kept him in demand across the country and abroad.

If you want to hear his talent before the show on the 21st, check out the 2008 movie Cadillac Records, a musical biopic of Chicago’s Chess Records and its stars, with Jeffrey Wright as Muddy Waters, Mos Def as Chuck Berry, Cedric the Entertainer as Willie Dixon and Beyonce Knowles as Etta James. The real star of the movie is Flynn’s guitar. It’s him playing the music of Muddy Waters and Howlin’ Wolf and Chuck Berry, and even The Beach Boys. 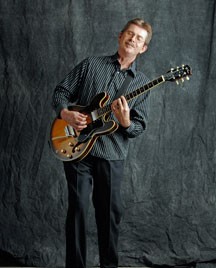 “Chuck Berry was the guy who really got me interested in playing the guitar, so it was quite an honor for me to do the soundtrack,” Flynn said. “A friend of mine who does play with Chuck Berry said there were a few things in there where he thought it actually was him, that they used some of his tracks, so that was quite a compliment to me. Another good thing that came from the movie was the Etta James on there was sung by Beyonce. We did about four or five tracks of Etta James music. It ended up winning a Grammy for the R&B single of the year for ‘At Last,’ so I am technically a Grammy-nominated musician.

“It was quite an honor for me to be selected among all the guitar players to do not only the Muddy Waters and Chuck Berry and the Etta James, but other things in the movie, too, like The Beach Boys. I played the intro to ‘Surfin’ USA,’ which is pretty iconic.”

The reason the producers chose Flynn to play the guitar throughout the movie is that everyone told them he was the guy to deliver.

“They had heard about me. They went and checked everybody out. They did interviews with people, asking them about me,” he said. After Muddy passed away, his band became the Legendary Blues Band and I played with them off and on for 20 years. They knew I had a lot of experience and had played with a lot of the players like Pinetop Perkins, Willy ‘Big Eyes’ Smith and Calvin Jones from the original Muddy Waters band. They thought it was a good fit.”

In 2012 a tribute was held at the historic Apollo Theater for Howlin’ Wolf’s late guitarist Hubert Sumlin, called Howlin’ for Hubert.

“When I was 19 years old I was actually touring with Hubert. I was playing in the Jimmy Dawkins band and we backed up a lot of different people,” Flynn said.

It seems every blues and rock guitarist of note on the planet wanted to play at the event. 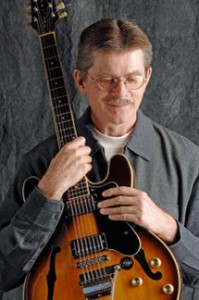 “Eric Clapton, Keith Richards, ZZ Top, just everybody because they respected Hubert so much,” Flynn said. “We had one rehearsal that was about 20 hours long, one artist after the other. Both Eric Clapton and Keith Richards were talking to my wife (Mary Flynn, host of The Blue Side blues show heard on Wisconsin Public Radio Tuesdays from 10 pm to midnight). They were really happy to be part of the show and wanted to meet me.”

You can find segments of the Howlin’ for Hubert tribute show on YouTube, as well as many other amazing Flynn performances.

“I’ve had such an incredible musical life so far,” he said. “I wonder sometimes how am I going to keep this going, but there’s always something new.”