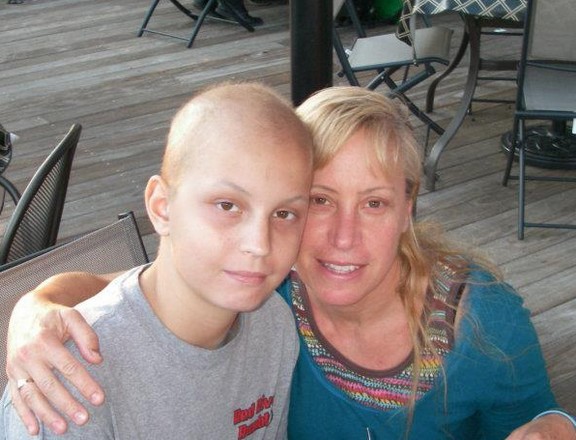 Bo Johnson and his mother Annika.

Bo Johnson, the 13-year-old boy whose fight with leukemia inspired his community and whose message of kindness touched people across the state and beyond, died early this morning.

Bo, who loved sports and spending summer days at the Sister Bay beach with his friends, was diagnosed with Extramedulary Acute Myeloid Leukemia (EM AML) in October of 2011. Almost immediately, his schoolmates began painting Northern Door orange as they rallied around their friend, as GO BO! ribbons, shirts, and bracelets became ubiquitous in Sister Bay. 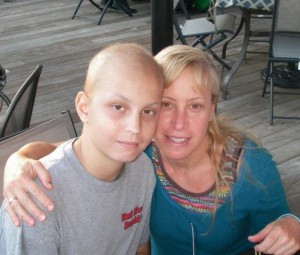 Bo Johnson and his mother Annika.

Near the end of August of this year Bo’s doctors told him there was nothing more they could do for him, that he would die from his disease. Rather than slip away painfully in a Milwaukee hospital, he chose to come home to spend his last weeks with his friends and family, ending his days watching the sun set over the water he loved so much.

Though his cancer was ravaging his body, Bo did not sulk. He welcomed visitors and made it to volleyball and football games to support his Gibraltar schoolmates even as they were doing all they could to support him. The Make A Wish Foundation gave him the weekend of a lifetime, bringing him to Lambeau Field to tour the facility and meet his beloved Green Bay Packers. Bo broke the team’s post-practice huddle, ate lunch with Aaron Rodgers, Jordy Nelson, and Donald Driver, and talked shop with Mike McCarthy, then watched the Packers play the 49ers from a suite.

“It was a real special day,” said his uncle Rolf Johnson. “Everybody knew his name, they all acknowledged Bo. He was grinning from ear to ear.”

Randall Cobb spent a lot of time with him and said he’d do his best to score a touchdown for Bo. Against the 49ers, Cobb returned a punt for a touchdown.

Bo spent his final weeks in considerable pain, confined to a wheelchair, but that didn’t faze him. On Sept. 6 he asked for the chance to address his schoolmates in the Door Community Auditorium. On his way to school Rolf asked him if he was sure he wanted to do it.

“You can’t make me nervous, Rolf,” Bo replied. “These guys have seen me in my wheelchair, bald, they’ve seen me pee in a bucket. I’m not embarrassed by any of this anymore.”

Rolf pressed him further. “Well, do you need to write something down? Are you prepared?”

“I know what I want to say,” Bo replied, in the blunt style that reminded his family so much of his grandfather, the late restaurateur Al Johnson.

The weakened 13-year-old then took the stage in his wheelchair and delivered a message of hope, of kindness, and of love to his teachers and classmates at Gibraltar. He talked about seeing kids in the hospital who were mistreated because of their disabilities and urged his classmates to step in when they saw bullying, to have their back the way they had his through his fight.

“I think them, out of anyone, should get respect,” he said. “If you could step in when you see a group bullying, just do that. You’ll make the kid’s day.”

During his treatment Bo thrived on the strength sent to him by hundreds of friends and strangers, but on his floor at Children’s Hospital of Wisconsin in Milwaukee he saw other kids suffering, some of them seemingly alone. Many would become his friends, his mentors, and his teammates in the fight against terrible odds.

“They taught me a lot,” he said in an interview shortly after he came home. He then spoke of a friend he lost, Jack Bartosz. “They gave me advice. Jack and I would go along the floor pulling pranks on nurses. They showed me that it’s not all doom and gloom in there.”

If he survived, Bo wanted to help people.

“I would just like to go to the hospital, even to [Scandia Village] just to help,” he said. “Or take a spare $25 that would help a family up at the HOT [Hematology, Oncology, and Transplant] unit. Donate food to the nurses. Just to help anyone I could in that kind of way.”

As his condition worsened, Bo urged those who cared about him to keep the GO BO! fund alive after he passed, aiming for a cure for childhood cancer, and to pass on simple kindnesses to each other and those in need. The strength he displayed in his final weeks spurred a bevy of fundraisers and donations to the GO BO! Foundation.

He inspired the youth of Door County to teach adults a lesson in humanity, as competing teams from Southern Door, Sevastopol, and Sturgeon Bay arrived at Gibraltar school for competition in the new color of unity, orange. They wore ribbons in their hair, GO BO! t-shirts and bracelets, and they wrote GO BO! on their arms and legs, illustrating tremendous compassion for the fight of a boy few of them would ever meet.

In the final words of his address to his school, he implored his friends to make the most of the days he wouldn’t see.

“I hear this all the time from my friends when they jump off the dock,” he said, referring to the swimming pier at the Sister Bay beach. “I hear them say YOLO, You Only Live Once. Think about what you do. Think about what matters. Live your life like it’s your last.”

But they’ll have the score wrong. In fighting cancer with an openness, an honesty, and a bravery few could match, Bo Johnson stole victory from defeat.

Donations to the Go Bo Foundation can be made at Associated Bank in Sister Bay.

Bo Johnson: Teaching Us How To Live

We’re Better Because of Bo: What Teachers and Parents Learned from Bo