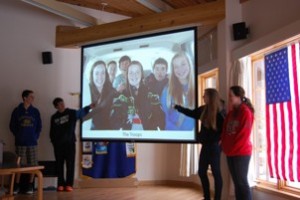 During a presentation at the April 10 meeting of the Rotary Club of Northern Door County, four of the six students who volunteered at the Ronald McDonald House talked about the three-hour ride while showing a photo of the trip. The four students in attendance were, from left, Nathan Surges, Andrew Iding, Riley Haleen, and Jenny Leonard. The two other students who volunteered were Olivia Alberts and Connor Brennan. Photo by Jim Lundstrom.

“Every move we make and every action we take, matters not just for us, but for all of us…and for all time.”

Bo Johnson believed in the pay-it-forward philosophy of The Butterfly Effect. The 13-year-old shared that philosophy with friends and classmates at Gibraltar Secondary School before leukemia took his life on Sept. 28, 2012.

It was a message that many took to heart, including a group of six Gibraltar Secondary School 8th graders, classmates of Bo’s, who wanted to do something for other kids in situations similar to that of Bo.

Four of the six students braved a snowy April morning to attend the weekly meeting of the Rotary Club of Door County North at Björklunden Lodge to report on their Rotary Club-funded trip to Milwaukee.

“Bo just kind of gave me the idea and I went with it. I got some of my friends together and we decided to go,” Jenny Leonard told the group of Rotarians during a slide show of the February visit to the Ronald McDonald House.

“Bo wanted us to pay it forward. It made me feel good to help the people,” said Riley Haleen. “It was amazing.”

“We knew what our friend Bo went through,” said Nathan Surges. “A lot of families are going through the same thing, and that House is a really nice place for them.”

The six students were escorted to Milwaukee by Jenny’s parents, Steve and Julie Leonard. The students bought the food for an evening meal and breakfast the next day. They did all the cooking and serving as well.

“When you look at the whole experience of what they got as far as setting the whole program up, running it themselves, they did a great job,” Steve Leonard said. “These kids really respected the privacy of the families and were really supportive.”

Ann Petrie, chief executive officer of Ronald McDonald House Charities of Eastern Wisconsin, said the volunteers who take part in the Family Meal Program are essential to the House.

“We survey every family that stays with us and usually the family diner is number one or two on their list of what was important to them during their stay,” she said. “What we are really here to do as staff and volunteers is make this feel like a home away from home so the families can relax and not feel they are in the spotlight.

If you look at what these families are going through, to be able to come back from the hospital at night and get a home-cooked meal from people who really want to share their time and love, it really makes all the difference in the world.”

The fact that Bo inspired the kids to volunteer is even more remarkable, Petrie said.

“Bo was a very special kid. He and his mom [Annika Johnson] were so special to the house,” she said. “The awareness that resulted form his situation was really amazing. It just shows that as terrible as the situation was, Bo’s memory has done so much good already.”

And that will continue, Bo’s friends told the Rotarians. “We want to do it again, and we want to get more kids involved,” Andrew Iding said.

• Opened in Wauwatosa in 1984 for families with seriously ill children being treated at Children’s Hospital of Wisconsin or other Milwaukee-area hospitals.

• Originally opened with 25 bedrooms; an extended-stay wing with 13 two-room units were added later, and private bathrooms were added to the other rooms.

• More than 34,000 families from 568 Wisconsin communities, 48 states and 26 foreign countries have stayed.

• There is a suggested donation of $10 per night for families, but no family is ever turned away if they are unable to pay.

How You Can Help

While McDonald’s is the largest corporate sponsor of the Ronald McDonald House (RMH) of Milwaukee and other RMH’s around the country, they still must raise money as other non-profits do.

“We don’t get any government funding,” said Ann Petrie, chief executive officer of Ronald McDonald House Charities of Eastern Wisconsin. “We get about 15 percent of our annual operating revenue from the coin collections at McDonald’s restaurants. That gives us about $25,000 every year, which is wonderful.

Other than that, we have to do what every other charitable organization does – beg and plead for all the dollars we need every year.”

Last year more than 600 families in need were turned away from the Ronald McDonald House because it is running at capacity. In order to meet those needs, a capital campaign was started to raise approximately $10 million to double the size of the house to 70 guest rooms.

In addition to the Family Meal Program, here’s how you can help the Ronald McDonald House:

• Make a contribution toward the Capital Campaign.

• Ask your employer to match your gift.

• Collect soda pop can tabs and donate them to RMH.

• Remember the Ronald McDonald House in your will.