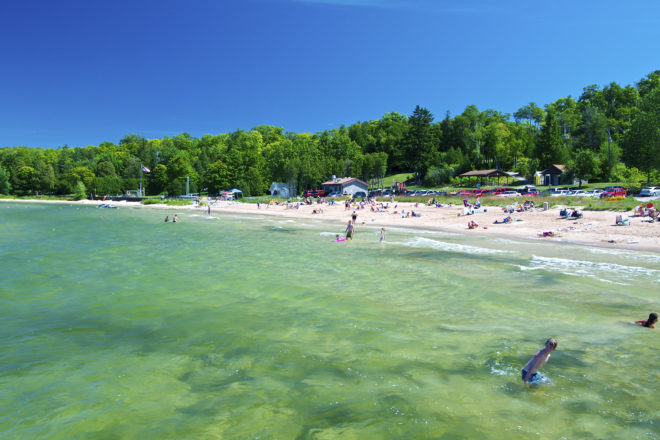 A series of incidents took place 16 years ago that has led to Door County being a progressive leader in the health of its 34 beaches.

It all began in 2002 when the Door County Public Health Department was notified that an unusual amount of toilet paper and anti-diarraheal medicine were being sold at the store at Nicolet Beach in Peninsula State Park. That led to an investigation that determined 68 people were made ill by E. coli bacteria in the water at Nicolet Beach.

“At the time, we had no monitoring program whatsoever,” county Conservationist Greg Coulthurst told the Door County Board of Health during a presentation on beach health at its March 12 meeting.

That, of course, prompted the county to wonder what was going on and how to correct the problem. Coulthurst said the county immediately began applying for grants to monitor for bacteria in the water.

Because the story of the contaminated beach made the news, Public Health Director Rhonda Kolberg got a call from Greg Kleinheinz, chair of the Department of Engineering Technology at the University of Wisconsin-Oshkosh, who was calling because part of his mission includes public environmental health and engineering. He wanted to know how he could help.

It was the start of a beautiful relationship for Door County’s beaches. The county contracts with UW-Oshkosh to have students monitor the county’s beaches through the summer months, and 13 beaches have undergone remediation. Coulthurst said the work began with seven grants from the Wisconsin Coastal Management Program that allowed the county to look at non-point pollution sources at most of the county’s beaches, as well as stormwater routes, and E. coli levels in the water and sand, bird droppings, wave action and even how the deep the water was on the beaches.

They soon determined that most of the pollution was from stormwater and other local sources.

Kleinheinz said leaders in Door County have much to be proud of for taking the lead in dealing with polluted beaches.

“A lot of counties buried their head,” he said. “Door County took a very proactive approach.”

He added that more work has gone into understanding the factors contributing to unhealthy beaches and correcting them in Door County “than any other single county probably in the country but certainly in the Great Lakes.”

The Board of Health also learned from Kolberg that the county’s citizen well testing options are expanding. Instructions and bottles for collecting samples can be picked up at four different county departments – Extension, Soil and Water, Land Use Services and the Health Dept.

Residents can choose where to bring or send the samples, the UW-Oshkosh lab or the labs at the wastewater treatment plants in Baileys Harbor and Ephraim. Kolberg said Culligan’s also does testing.

“We will have bottles from all those facilities,” she said.