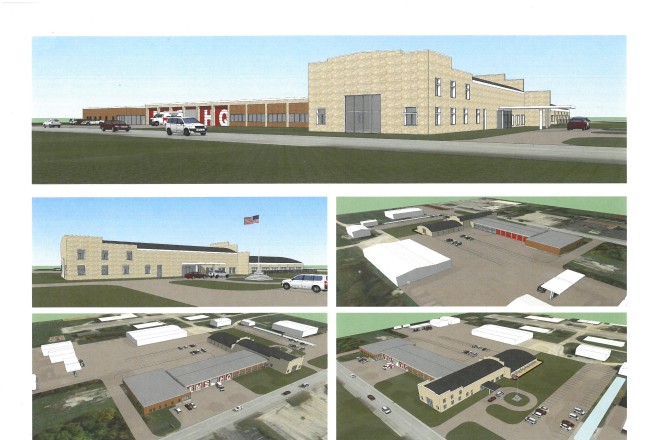 Different views of the old county highway shop as envisioned by Venture Architects, the Milwaukee-based company that conducted the feasibility study of rehabbing the old building for EMS headquarters and the senior center.

With five of its 21 members vacationing, the Door County Board of Supervisors voted 15-1 at the monthly meeting Feb. 23 in favor of building a central ambulance station and human services resource center at the former old highway shop on 14th Avenue in Sturgeon Bay.

Although absent, Supervisor Susan Kohout sent a letter in support of the rehabilitation project, with six reasons why it makes sense, including “Finally, the longstanding dilemma of what to do with the old Highway Shop will no longer exist.”

The lone dissenting vote came from Supervisor John Bur, who questioned what had become of a $1 million donation that had been talked about for the senior citizen center component of the project.

County Administrator Ken Pabich added that while a 501(c)(3) had been set up to raise money for a new senior center, a capital campaign to raise funds was never begun.

Bur said he thought the resolution should be split into two parts – one for the EMS center and another for the other part of the building, which would include the senior center and office space for the county’s growing Aging and Disability Resource Center.

“How do you split it up?” Austad asked, adding that the Property Committee thought putting the two projects together on a county-owned piece of land was more cost effective and efficient than creating two new buildings at separate locations, one of which, the EMS center, would have been on land leased from Ministry Door County Medical Center.

“Many of us were not in favor of that,” said Property Committee Chair Richard Virlee regarding the leased land. He said the objection was that there was a built-in condition that at any time, the hospital could have the EMS building on the leased land appraised and buy out the county.

“The big thing here, if we go ahead with this project, we’re going to own it,” Virlee said.

Property Committee member Jon Kok said the committee did not approve pushing forward a resolution on the project, so, he asked, where did this resolution come from?

Austad said while technically the Property Committee did not authorize the resolution, it did give instruction to Corporation Counsel Grant Thomas to draw up a resolution.

Thomas pointed out that the only action a county board can take is through a resolution.

Bur said he had a problem with the scope and size of the project.

“It’s going to be used by such a small portion of the taxpayers,” he said, referring to the senior center.

Superintendent Steve Sohns suggested the board could make adjustments on how it wants to proceed once they get hard figures back from the architect.

“We could have just a bare bones building that could be used for storage or anything,” he said.

Referring to Bur’s point that only Sturgeon Bay seniors use the senior center, Superintendent Helen Bacon said that is an outmoded way to view the center because she has volunteered there long enough to know that people from up and down the county use the center and its services.

Virlee pointed out that the two department heads who would be using the rehabbed highway shop – Dan Williams of Emergency Services and Joe Krebsbach of Human Services – have already said the plans would meet their needs.

Austad pointed out that approving the resolution would simply allow the hiring of an architect to come up with costs. He added that he believes that due to current low interest rates, it would be best to do all the work on rehabilitating the building at once.

Superintendent Richard Haines asked if it is true that results of soil samples will be available in two weeks, and, if so, he wondered if the board should delay a vote until those results are in.

The soil borings will determine how badly contaminated the soil beneath the former highway shop is. The proposed $9.2 million budget for the project includes $400,000 to remove two feet of contaminated soil from the entire building project area, but that is seen as the extreme end of what will be needed.

Austad said it would not help to delay the vote, and that it would be best to get an architect working on a report for the board.

The board agreed with the 15-1 vote, and then moved on to the second resolution, which gives authority to the Property Committee to retain an architect and construction manager to come up with a cost estimate for the project, and authorized the expenditure of up to $350,000 for this first phase of the project. That too passed 15-1, with Bur the lone dissenter.

The board also approved a request to transfer $27,000 from the $500,000 Museum Expansion Project Account to hire a Limited Term Employee to work on a strategic plan for the museum’s growth and for fundraising to aid in that growth. Pabich explained that the person in this position will help focus vision on the museum’s future.