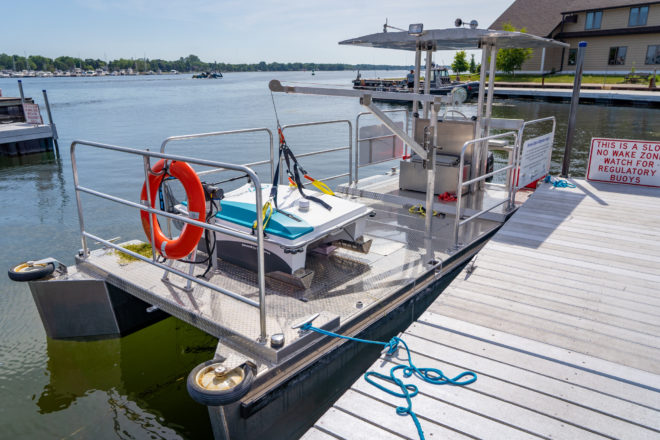 To the best of scientists’ knowledge, there is no version of the Great Pacific Garbage Patch in the Great Lakes, but that doesn’t mean everyone is waiting until a huge trash vortex accumulates to address marine debris.

“People see the big pictures in the ocean, the big gyres of garbage, but they don’t realize that there’s 22,000 pounds of plastics that are put into the Great Lakes every year,” said Greg Kleinheinz, a University of Wisconsin-Oshkosh professor of environmental engineering technology who also chairs the department and is the Viessmann Chair of Sustainable Technology. “It’s an emerging and significant issue.”

Kleinheinz’s statistic came from the Rochester Institute of Technology, which inventories and tracks high concentrations of plastic in the Great Lakes. The institute estimates that the equivalent of approximately 100 Olympic-sized pools full of plastic bottles is dumped annually into Lake Michigan alone.

Garbage that pollutes U.S. rivers, lakes, streams and creeks is considered “aquatic trash” by the Environmental Protection Agency. That aquatic trash becomes “marine debris” once it reaches the ocean or the Great Lakes. Marine debris, according to the National Oceanic and Atmospheric Administration, is defined as “any persistent solid material that is manufactured or processed and [is] directly or indirectly, intentionally or unintentionally, disposed of or abandoned into the marine environment or the Great Lakes. Anything human-made and solid can become marine debris once lost or littered in these aquatic environments.”

Plastic waste is particularly concerning because it’s used widely and never really goes away. Instead, sun exposure, waves and temperature changes break the plastics down into smaller and smaller pieces until they become “microplastics” of about 5 millimeters or smaller. (There are about 25 millimeters in an inch.)

Microplastics remain in the water or wash up on land and are very difficult to remove. Aquatic organisms eat microplastics and the chemicals they carry, and in that way, plastics make their way up the food chain.

“Finding plastic particles is one thing,” Kleinheinz said. “What kind of health effects do they have on fish or macroinvertebrates, which relates to sport fishing? People don’t understand all that.”

Understanding requires research, and research requires people gathering data in the field and in the lab.

Meet Nicole Cochems, a UW-Eau Claire geology major who’s entering her third year, and Sara Pabich, a Door County resident who graduated this year from UW-Madison with a degree in economics and environmental studies.

The two, along with Kleinheinz, launched a pontoon-style boat off Sawyer Park in Sturgeon Bay one early-July morning. They are two of seven students hired this year to work for UW-Oshkosh out of a rented home in Baileys Harbor. They and the other students – UW-Stout, UW-Oshkosh and Michigan Tech are also represented – were selected from four times as many applicants.

“It’s probably the most popular program we run,” Kleinheinz said. “They make a little money to help fund their education; they get to be in a great place [where] most people don’t have an opportunity to live; and they get to learn both field and laboratory skills in some area that’s related to whatever their career path is.”

Their primary role is working with Wisconsin’s Beach Monitoring Program. Throughout the summer, they test beach-water samples from 32 of Door County’s 54 beaches for E. coli, a bacterium that indicates the presence of pathogens that can cause illness. If E. coli levels are high enough, they issue beach-water advisories or closures.

Kleinheinz has been running the program since 2003 and usually pairs it with another research project. His groups have tackled beach economics, beach remediation and beach microbial source identification, to list a few.

“In this case, this year, we have a trash boat,” Kleinheinz said.

The Marine Debris Mitigation Project boat is pontoon-style craft with a 50-horsepower Mercury motor that tops out at 5 mph. A large basket installed below deck scoops up all it encounters. Since May and through Labor Day, the students will collect aquatic trash weekly from four locations: the bay of Sturgeon Bay, the mouth of the Fox River in Green Bay, in Algoma/Kewaunee and in Manitowoc.

A marine drone docked on deck is swung into the water to navigate remotely around boats in the closer quarters of marinas using a tablet-like device. It, too, is equipped with a basket and has a range of up to 1,200 feet from the boat’s operator.

The students also collect water samples that are filtered in the lab to determine the quantities and types of microplastics that are present.

After a day on the water, they return to Crossroads at Big Creek, where they dock the boat and empty the basket contents. Some of the most commonly found forms of plastics in Great Lakes waters include plastic pieces, cigarettes and filters, foam pieces, plastic bottles and caps, food wrappers and straws.

“This is kind of the worst scenario because we’re cleaning up what’s already in the water,” Kleinheinz said. “It would be better to prevent what’s going in there.”

To do that, they also identify and characterize what they’re finding.

“Then we can hopefully start an education campaign to prevent that,” Kleinheinz said.

Once, they found a tire. Mostly they find pop bottles. Sometimes, the catch is only seaweed and dead alewives.

“We don’t want to see trash, but I was thinking there was going to be tons and tons of trash in there,” Cochems said. “I was not expecting to see as little as we’ve found.”

They’d been collecting debris for only a few weeks at that time, however. As the water and beach activities of the summer continued, they were expecting more.

“It would be exciting if we found a big pile of trash floating around, and we could scoop it all up, but on the other hand, that would be pretty depressing,” Kleinheinz said. “It’s good news for the community and the water that we’re not seeing big piles.”

The marine debris boat, funded through the Environmental Protection Agency’s Trash Free Waters Program, is Wisconsin’s first. And this is the first research group in the country to get the marine drone.

“A lot of times you’ll see trash boats in places like Chicago and Baltimore – really big metropolitan areas,” Kleinheinz said. “But when you look at the number of marinas, for example, in Sturgeon Bay and Door County, it’s pretty significant.”

At the end of the summer, the researchers will have a good set of data to work with.

“I think Door County is lucky that UW-Oshkosh has funding to do stuff like this in Door County,” Pabich said. “Once we get a better understanding of where the trash is, we can start those educational campaigns.”

“This is just one more aspect of how we can keep resources here clean – because it’s vital,” Kleinheinz added. “Not only to the society and culture of the county, but the economics of it as well.”