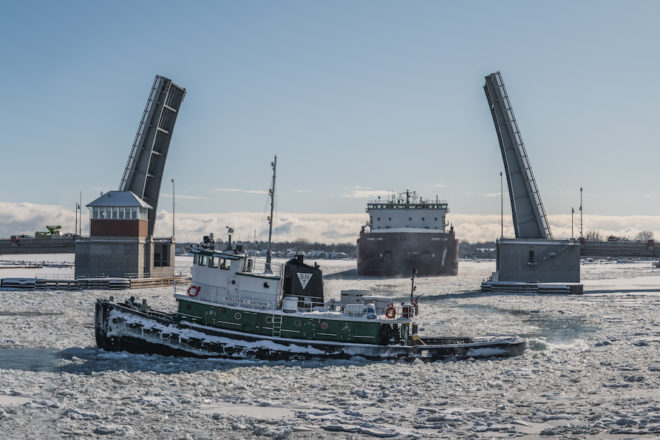 Visual impairment prevents Penny Olson from identifying ships she spots on the horizon from her Jacksonport beach home, but when she really wants to know, she has an app for that.

“With binoculars, I can kind of make them out. I have an app so I can tell what boat it is, and nine times out of 10, I worked on that [boat],” said Olson, who’s retired after a career as an office manager and bookkeeper at the shipyard in Sturgeon Bay for R.A. Stearns and then Bay Engineering naval architects.

In 2002, both the International Convention for the Safety of Life at Sea and St. Lawrence Seaway required oceangoing vessels over 300 gross tons to carry onboard automatic identification system (AIS) transceivers for safety and tracking purposes. AIS helps the Coast Guard to immediately locate ships, and it also helps the captain and crew.

“Vessels have AIS systems so companies can track them, and so when ships are coming up on each other on the open sea or seaways, they can call each other,” said Craig Perciavalle, vice president and CEO of Fincantieri Bay Shipbuilding. “It’s a safety feature for the vessels themselves, so folks can understand where they are and where they’re going,” Perciavalle said.

Today, several websites, both for professional use and for hobbyists, are available on the internet. Olson uses Boat Watch App, which can spot, track, identify and educate the app’s user on any boat or ship.

Perciavalle said he occasionally uses online boat trackers out of curiosity, and more frequently when vessels leave Sturgeon Bay, such as the new bulk carrier built at the shipyard, the MV Mark Barker, which sailed this year to Cleveland, the home of the ship’s owner, Interlake Steamship.

“We track lots of vessels – certainly the Barker,” Perciavalle said.

“We live near the entrance to the canal, and there’s a lot of traffic that comes by here, and there are a lot of different-looking ships,” he said. “What I like about it is I can identify what ship it is and find out where it’s going. A lot of ships coming by here are going to the yard.”

For example,when a small cruise ship went past Ward’s house, he got a look at it before it docked at Fincantieri Bay Shipbuilding.

“It’s entertaining,” he said. “These are enormous machines, when you think about them as machines. And because we’re so invested in shipbuilding in Door County – and historically have built ships for 100 years – it’s always interesting to see what ships were built here in Sturgeon Bay.”

Ward said many of the sites have contributors who write news from ports, as well as Great Lakes–themed “this day in history” sections.

“Boat Watch is probably more sophisticated graphically than Boat Nerd – which was the first one I encountered,” he said. “Boat Watch has a giant map, and you kind of separate it with your fingers, and all of the vessels show up. You can find out if there’s an accident or a boat runs into a wall, way off in Cleveland. A lot of times if there are boat accidents, you know one of those ships will wind up coming to Sturgeon Bay.”

App users often get a heads-up so they can see boats that are coming in for the winter or for repair. Users can also be the first to see which boats are anchored nearby or behind an island to get out of the wind during storms.

“When they’re going down Lake Michigan, they’ll go closer to one shore than the other to reduce the wind effect,” Ward said.

App users in late October were tracking the progress of the bulk carrier Roger Blough after two Muskegon-based tugboats towed it out of Sturgeon Bay. The Great Lakes Maritime Center in Port Huron posted on Facebook to watch the tugs Meredith Ashton and Candace Elise on AIS because the Blough, being towed as a dead ship, was giving no signal.

Online users also can track boats and follow them directly on their Facebook pages. If the 1,000-foot SS Wilfred Sykes toots its horns and departs from Sturgeon Bay, for example, they might find out where it’s going.

Generally, the crew on board does not disclose ship conditions or business dealings, but Facebook followers of the Sykes, for instance, get to see the work of an onboard photographer and videographer.

Also, boaters making the loop around the eastern United States use apps through the American Great Loop Cruisers Association to find fellow “Loopers” and to monitor hazards and commercial traffic. Similarly, Dan McNeil – a resident of rural Baileys Harbor who was featured in August in the Pulse – had his AIS signal on and visible via marinetraffic.com while sailing his rebuilt, 1947, Chilean ketch – the Surazo – south of St. Louis.