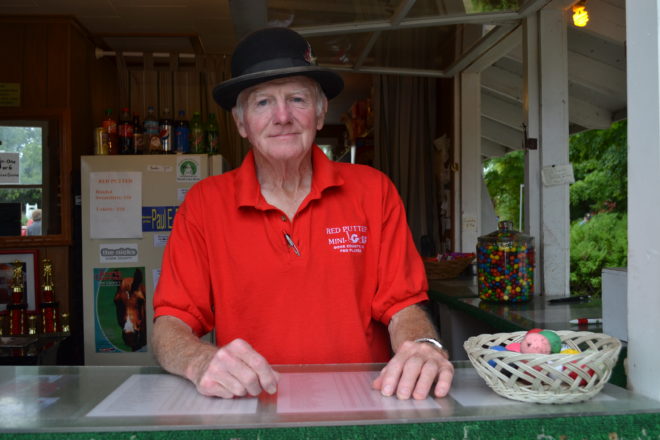 Bob Yttri, owner of the Red Putter, in his familiar perch at the golf course in August of 2016. Photo by Alyssa Skiba.

Bob Yttri liked to say, “I don’t have customers, I have friends.”

Today thousands of those friends are mourning the death of the local legend who turned The Red Putter mini golf course in Ephraim into a staple of Door County summers.

Bob Yttri died Thursday, April 6, at age 79. Friends far and wide shared their appreciation for him on social media, remembering his kindness and generosity and describing treasured family memories at the course.

Yttri and his trademark black bowler hat were omnipresent behind the counter at the Red Putter. It seemed he’d been there forever, but the mini golf business came to him later in life. Yttri, who was born July 7, 1937, was a real estate manager who decided to buy the Red Putter from its founder, Clyde Logerquist, as his family played a round.

“My daughter and wife would come here, and I would always stop and talk to Clyde,” Yttri explained to Andrea Nelson for the Peninsula Pulse in August of 2016. On one visit the idea of buying it came up, and after a brief negotiation they had a deal. Yttri took the reigns on Jan. 1, 1993, and soon became a fixture.

He was known to open early and stay late, sometimes into the early hours of the morning, and he gave out bumper stickers to those who played through the rain. He was a devoted fan of the Sister Bay Bays County League baseball team, which made a tradition of celebrating Sundays – win or lose – with a team round at the place regulars refer to simply as “the Putter.” Yttri always had a prize for the Bays’ best round, and a “boobie prize” for the worst – a huge can of prune juice, clam juice, or kraut juice – which the loser was obligated to down on site.

In 2002 he started The Red Putter Pro Tournament, which grew into the one of the largest mini golf tournaments in the country.

In 2016 the August tournament hosted 69 competitors competing for a $2,000 first place prize, and more importantly, the coveted Red Jacket. The success of that tournament inspired the Frostbite Open, an abbreviated two-round tournament that takes place each New Year’s Day.

The two competitions draw mini golfers from hundreds of miles away, some for the prizes, but most for something else.

“It’s his character, his friendliness that just makes you want to come back,” Red Jacket holder Asta Marie Stanwyck, of Mequon, said in 2007.

Yttri and the Red Putter were so adored that the seemingly simple putt putt course came to be about much more than mini golf. It had a role in four films and hosted six weddings, including that of his daughter Tracy Yttri Opper.

And while the course introduced so many to Yttri, it was his many simple kindnesses that his friends celebrated upon hearing of his death. A free round for a family that didn’t have cash on them (“Just come back and pay later”), a candy bar for a great score, a pizza for the gang.

A smile for everyone.

A celebration of the life of Bob Yttri will be held later this spring.