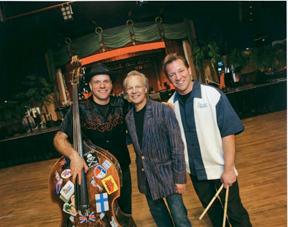 The legendary Bobby Vee & The Vees will take the stage at the Door Community Auditorium on Sunday, August 23 at 8 pm.

An aspiring musician, Vee, along with his brother Bill and two friends, formed The Shadows, a popular local band in the town of Fargo, North Dakota in 1959.

A tragic twist of fate in February of that year catapulted Vee into the limelight, and he went on to become one of rock and rolls most popular performers. Vee was only 15 years old the night a plane crash in Iowa took the lives of Ritchie Valens, Buddy Holly, and “The Big Bopper” Jiles Richardson while en-route to a concert in Fargo. Rather than cancel the scheduled concert, promoters asked local talent to fill in, and among the young performers to step up to the mic was Bobby Vee.

A few months later, Vee and the band cut its first recording, “Susie Baby,” one of the teenager’s original songs. It immediately reached number one on all the local stations, and major recording companies soon took notice. By the fall of 1959, The Shadows had signed with Liberty Records.

Throughout the 1960s, Vee’s recordings consistently hit the charts. Beginning with his first singles “Devil or Angel,” and “Rubber Ball,” Vee won the hearts of fans with his “new voice.”

In the course of his career, Vee has earned six gold records, 14 Top 40s hits, and two gold albums. According to Billboard magazine, Vee is “one of the Top Ten most consistent chart makers ever.”  Earlier this year, the Rock and Roll Hall of Fame and Museum honored Bobby Vee as one of the leading rock stars of all time.

In concert, Bobby Vee is accompanied by sons Jeff and Tommy on drums and bass, respectively. Recognized in the music business as the rhythm section to the stars, the brothers have a mile-long resume. Together, they have performed and toured with Little Richard, Jerry Lee Lewis, Paul McCartney, Chuck Berry, and many more.