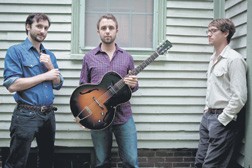 If you catch the Brooklyn-based band Tumbling Bones it’s easy to forget that you’re listening to a trio of 20-somethings.

Their well-honed, raw sound weaves effortlessly through the high energy, boot-stomping rhythm of “Banks of Jordan” and “Five Points” to the gospel-tinged crooning of “Trouble Around My Soul,” the band’s take on a traditional African-American spiritual.

It’s a sound they’ll bring to the stage of the Door County Beer Festival June 16 as they headline a full day of music in Baileys Harbor. Local stalwarts Big Mouth warm up the stage at noon, followed by the esteemed Memphis guitar-pickers Eric Lewis and Tommy Burroughs.

The Bones lead singer Pete Winne said that it wasn’t hard for the three musicians to find each other as freshmen at New York’s Vassar College.

“Jake [Hoffman] and I were assigned as roommates our freshman year,” he said. “And not many students in New York were into traditional southern music, so it was somewhat easy to find Sam [McDougle].”

Influenced by classic country and bluegrass artists like Doc Watson, Bill Monroe and George Jones, the trio represents a generation drawn more easily to bluegrass than those before them. In Door County, musicians like Lewis and the music of American Folklore Theatre birthed a new appreciation for the genre once seen as backwoods music. Winne pointed to multiple reasons for the national surge in its popularity.

“A lot of people attribute it to Oh Brother Where Art Thou, which drummed up a lot of interest in American Roots Music,” Winne said, referring to the Coen Brothers’ movie from the year 2000 starring George Clooney. The film’s soundtrack of American roots music is one of the top 10 selling soundtracks in history.

“But it may also be an echo of the boomer generation, which got into folk music in the 1960s,” Winne continued. “In the last 10 years their children have come of age and sort of tapped into their parents music. At the end of the day though, it’s just damn good music.”

At Vassar the bluegrass aficionados developed an instant chemistry that quickly grew into a band, the Powder Kegs, what they termed a “stringband-turned-indie-rock outfit.” They earned acclaim on NPR’s “A Prairie Home Companion” when they won the show’s “People in Their Twenties” talent competition in 2007.

Despite that success, the three went in different directions after graduating. Winne moved to Virginia to work for a bluegrass record label. McDougle pursued neuroscience research and writing, while Hoffman moved to Portland, Maine to work for a non-profit bringing music into prisons.

But in the winter of 2011 Winne came across some studio time. He had nobody to play with and naturally turned to his bandmates. They reunited and after a day of rehearsing recorded the EP “Risk Not Your Soul.” They liked the sound and thought the session was something they could build a band around again.

“It all just clicked,” Winne said.

This summer marks the first time that the three friends are focused solely on the band, with no college or jobs to work around. In June they’ll play two gigs in Chicago, hit the Door County Beer Festival, then head to Toledo, Ohio before heading to tour Ireland in July.