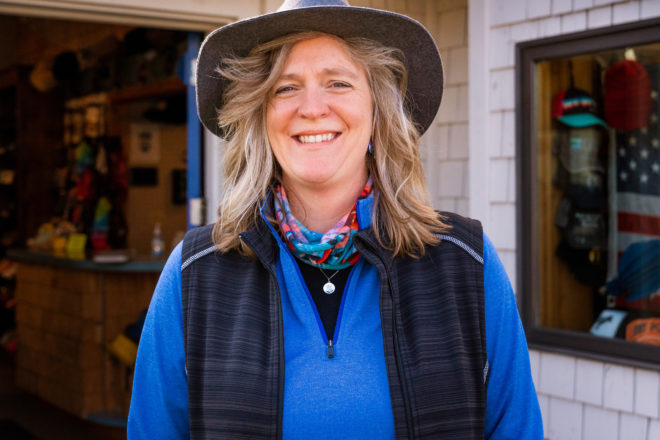 After hearing her name countless times, seeing her face in plenty of photos and reading about her prowess as a bartender, it was a relief to finally get Bonnie Spielman on the phone.

A busy Labor Day weekend had just passed, and she had spent it doing exactly that: laboring. Selling hats upon hats at the family business, Hat Head, in Fish Creek. Finally, the endless stream of Door County visitors had begun to slow, so she had time for a phone call with a stranger.

Thirty-eight minutes later, she had lived up to only about half the hype. I had been promised that Spielman was a bonafide jokester, a witty trash talker and unforgettable cocktail artisan with whom so many locals and tourists had bonded. Perhaps some of her flair was lost during a phone call from 1,000 miles away, but what translated really well was something a bit more sentimental than all of that: her genuine love for the peninsula.

Raised in Elmhurst, Illinois, as Bonnie Richrath, she was part of a family — like many — that vacationed in Door County every summer. Those “peninsula seeds” were sown well enough during the 1980s that, after graduating from Lewis University in 1994, Spielman headed to Door County for what she thought would be a short stint — a “gap summer,” if you will.

“I really had no plan,” she said. “I had no intention of staying up here. It was just gonna be a summer of fun to try to relax and figure out what I wanted to do.”

Her first job was at Pelletier’s in Fish Creek, grinding through the all-hands-on-deck fish boils. One gap summer led to two. Which led to three. And the winters in between.

Along the way, she met her husband, Bob, during an ice-volleyball tournament at Fish Creek’s Winter Festival, then known as the Winter Games. For someone still getting acclimated to the county, she said, it didn’t hurt to have a local on your arm. It was helpful to know the folks who kept Door County’s lights on throughout the winter, and she was keen to meet them all.

Spielman immersed herself deeper into the community in 1995 when she started coaching the basketball and volleyball teams at Gibraltar High School. Was it four years coaching the Vikings, or was it five? Maybe six? She can’t quite remember. It doesn’t matter. She considers coaching one of the best decisions she ever made.

She played a behind-the-scenes role at Hat Head for many years, and in the early 2000s landed a side gig bartending at Alexander’s. Want to get to know the folks in town? Start pouring them drinks.

“When you’re a bartender, you’re kind of out there,” she said. “Everyone knows your name. One thing I tried really hard to do was to get to know everyone’s name. I never liked it when people said, ‘Hey, Bonnie!’ and I’m like, ‘Hey, uh, you!’”

So she stashed a notebook in the liquor room and jotted down details about everyone who passed through the bar: where they were from, what they did for work and, perhaps most importantly, their beverage of choice. An unintended consequence was that most folks started to know her as Bonnie the Bartender much more than Bonnie the Store Owner.

The more I learned about Spielman, the more I wanted to grasp the why of her. I understood that her move to Door County was a bit arbitrary, but why did she stay beyond those gap summers? Why has she made it her home for 26 years now?

“I really don’t want other people to know this,” she said with a chuckle, “but there’s not much of a better place in the United States: no natural disasters, no tornadoes. There are no animals that can eat you. There are no poisonous spiders. There’s low crime. You can’t really pinpoint on a map a much better place to live, and I recognized that right away and appreciate it and am grateful every day that I live here.”

Spielman adores Door County so much that she believes there’s a certain smell that exists only on the peninsula. Maybe you do, too. But for my purposes, that answer didn’t quite satisfy!

It didn’t explain her personal pledge to community involvement. It didn’t explain why she established the Fruit Loop Run — a February staple — or why she and Bob were crowned Winter Festival king and queen in 2017. Or why she started the golf section in the Peninsula Pulse, drawing more attention to the county’s scene. Or why Digger DeGroot, a Door County legend, selected her as one of the few people allowed to publicly “roast” him in 2015.

Those are the real products of her Door County love story. The connections that bind.