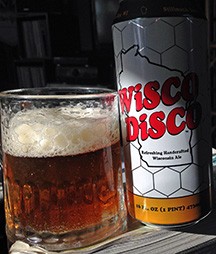 When I first heard of the beer Wisco Disco, I wondered, do I need boogie shoes to drink this stuff? I thought it might be a joke, a novelty beer.

And then I tasted it. The joke was on me. Again.

Brewer Brad Stillmank calls his Wisco Disco a “Refreshing Handcrafted Wisconsin Ale,” or he does if he wrote the description on the pint cans, which I suspect he did. This is a hands-on operation.

Wisco Disco has been described as an amber ale, which does not add up for me. To me, amber ale means lots of sweet crystal malt. That is not the character of Wisco Disco.

In the 2014 U.S. Open Beer Championships, Wisco Disco took a gold medal in the English special bitter category. It also took a bronze at the 2014 Great American Beer Festival.

All of that is huge for a small Green Bay brewery that just recently moved into its own space, complete with taproom that opened last October.

Wisco Disco is an excellent session beer. Milk sugar – or lactose – is one of the ingredients. You don’t often see that ingredient used outside of milk stout, hence that style’s name.

But here I suspect lactose is the reason for the soft touch this beer has on the palate, and what makes it such a great session beer. Can’t ever have too many good session beers.

Recently I had the opportunity to attend a beer dinner at Mojo Rosa’s in Egg Harbor, featuring Stillmank’s beer, and attended by Stillmank and his wife, Erin. Attendees could choose two of four entrées, each one of which was paired with one of Stillmank’s beers.

I chose chicken enchiladas in mole paired with Stillmank’s Perky Porter, which just took a gold medal at the 2015 World Beer Championships, and fish tostados with his IPA called Super Kind (in Hawaii, where the term originated, that would read Super Kine, but Stillmank is, after all, in Green Bay, where pidgin is probably rarely spoken).

The enchiladas were smoky, spicy and slightly sweet. Perky Porter was perfect with those flavors, as if it were brewed specifically to complement this rich dish.

Stillmank was seated next to me at the bar. He also ordered the chicken enchiladas and marveled at how the rich and spicy mole paired so well with his porter.

I don’t know what he ordered as a second course because I was too busy digging into my own, two nice slabs of avocado-topped whitefish on bulging house tostados wisely paired with Super Kind. The tostado textures were perfect, and SK brightened everything.

It really was a beautiful sensory experience.

For dessert we all had rich chocolate cake topped with a sauce made with reduced Perky Porter, and washed it down with Perky Porter, which includes locally roasted coffee as one of the ingredients.

Again, this was a match made in heaven, but both Stillmank and I agreed that while the chocolate cake and Perky Porter was good, the Perky Porter and mole/enchiladas was great.

I also sampled his Bee’s Knees, a honey rye ale. Loved it. It’s his lightest beer, yet it has a depth of flavor you wouldn’t expect from a lighter entry. Those deep characters are from both the honey and spicy rye.

As a result of this, I look forward to making a rare visit to Green Bay for Stillmank’s limited spring release Bock of the Future (why not Bock to the Future? I’ll have to ask him.). The website says it’s a Maibock – one of my favorite styles. It will be Stillmank’s first lager.

I think you will be hearing more about Stillmank Brewing Co. stillmankbrewing.com