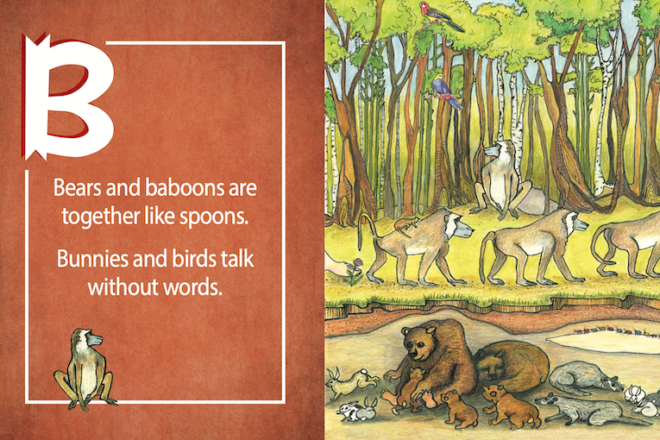 Imagine yourself as a child with the whole world of wildlife to explore. Wouldn’t it be fun to find as many animals as you could, working your way through the alphabet – rather like playing the ABC game during childhood car trips?

Sturgeon Bay resident Amy Phimister provides just that opportunity in A-B-C The Animals: A Scavenger Hunt through the Alphabet, with vibrant, clear illustrations by her cousin, Christine Degeneffe, also of Sturgeon Bay. The new picture book places mammals, reptiles, birds, fish and insects in their real or imagined habitats, which are often affected by or inhabited by people. Many of the animals are anthropomorphic – acting, though not speaking, like humans.

“I made the animals as realistic as possible as a teaching tool for children, but added in some humor,” Degeneffe said. Imagine a jaguar in its jungle home with a tightrope-walking juggler passing above.

On facing pages, Phimister’s simple, rhythmic rhymes invite the reader to identify the named animals, then look further to learn how others are interacting with their environment. Each page of text also includes an animal that represents the letter but is often not named in the text.

A complete alphabetical list of the animals and letter-related items on each page appears at the end of the book. (Birders, think of a life list.)

Humor, both visual and literal, abound, so sharing A-B-C The Animals aloud is a real treat.

When they were young, cousins Phimister and Degeneffe had talked about one day writing something together, but they did not set out to produce this charming alphabet book as a team. The drawings were part of an earlier project Degeneffe had worked on, and Phimister thought they deserved a wider audience. To write the romping, poetic text to accompany them, she put herself “in” the artwork as a child might and then wrote the text to match the drawings.

“I want it to be a kind of game,” Phimister said, “finding the animals and things on each page.”

Phimister’s poetry was also recently published in the Door County Poetry Collective’s anthology Halfway to the North Pole. Degeneffe is a graduate of the San Francisco Art Institute.

A-B-C The Animals: A Scavenger Hunt through the Alphabet, recommended for ages five to 10, is available at sandbeachpress.com and Novel Bay Booksellers in Sturgeon Bay.