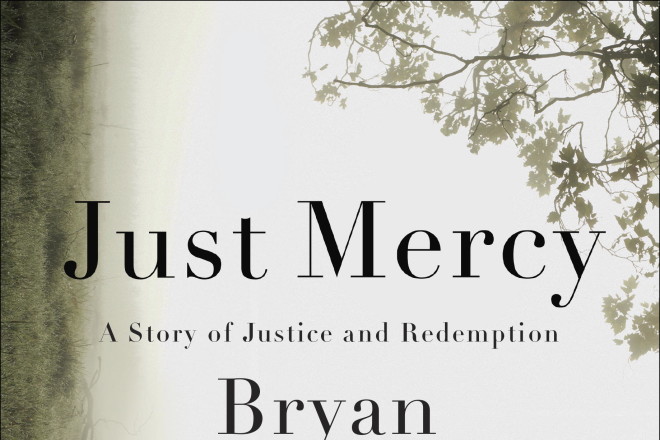 Bryan Stevenson’s book Just Mercy is both a memoir detailing the author’s experience as a lawyer and an indictment of the failings of the justice system in this country.

As a college student the author had studied philosophy, but during his senior year realized that “no one would pay me to philosophize when I graduated.” He decided to attend graduate school to prepare for a more lucrative career, but realized that most programs required a previous base of knowledge. Fortunately, he joked, “law schools…didn’t require you to know anything.”

He was accepted at Harvard, where he studied law while pursuing a graduate degree in public policy at the Kennedy School of Government. Initially he was disillusioned with law, but then he took a one-month intensive course on race and poverty litigation taught by a law professor who had worked as an attorney with the NAACP (National Association for the Advancement of Colored People) Legal Defense Fund. The class required him to spend time off campus with an organization doing social justice work. December 1983 found him working with the Southern Prisoners Defense Committee in Atlanta, Georgia, an organization whose mission was to assist condemned people on death row in Georgia.

One of the lawyers he worked with explained, “Capital punishment means ‘them without the capital get the punishment.’ We can’t help people on death row without help from people like you.”

Stevenson was a gifted black law student who found his internship helping death row prisoners a life changing experience. The opening chapter in his book describes his experience meeting with a condemned inmate named Henry. Although he was not yet an attorney, Stevenson was told that no lawyers were available, that he had to meet with the man and convey one simple message: “You will not be killed in the next year.”

While the subject matter of the book is in itself powerful, the author’s skillful use of narration, as well as his insightful introspection, engages his reader so that the work becomes as compelling as a mystery novel.

When Stevenson meets Henry, so does the reader, seeing the 20-foot square visitation room “with a few stools bolted to the floor. Everything in the room was made of metal and secured. In front of the stools, wire mesh ran from a small ledge up to a ceiling 12 feet high. The room was an empty cage until I walked into it.”

Henry “seemed even more nervous than I was. He glanced at me, his face screwed up in a worried wince, and he quickly averted his gaze when I looked back. He didn’t move far from the room’s entrance, as if he didn’t really want to enter the visitation room. He was a young, neatly groomed African American man with short hair – clean-shaven, medium frame and build – wearing bright clean prison whites. He looked immediately familiar to me, like everyone I had grown up with, friends from school, people I played sports or music with, someone I’d talk to on the street about the weather. The guard slowly unchained him, removing his handcuffs and the shackles around his ankles, and then locked eyes with me and told me I had one hour.”

While describing the dehumanizing treatment of the prisoner – including the rough shackling at the end of the interview, the cuffs put on so tightly that the man grimaced with pain – Stevenson, through the details of his personal conversation with his client, illuminates the condemned man’s humanity. When Stevenson delivers his message, the man facing execution poignantly responds, “Thank you, man, I mean, really, thank you! This is great news…You are the first person I’ve met in over two years after coming to death row who is not another death row prisoner or a death row guard. I’m so glad you’re here, and I’m so glad to get this news.” The prisoner, of course, still faces execution, but at least the date has been delayed.

When the guard was taking Henry away, Stevenson said, “I think those cuffs are on too tight. Can you loosen them, please?”

But Henry gave Stevenson a smile and said, “It’s okay, Bryan. Don’t worry about this. Just come back and see me again, okay?”

And then Henry did something completely unexpected, the author tells us. He began to sing, “a tremendous baritone voice that was strong and clear,” startling both the law student and the guard, who stopped his shoving, listening to the song:

Lord lift me up, and let me stand

By faith on Heaven’s tableland

A higher plane, that I have found

Bryan Stevenson graduated from Harvard with a law degree, and founded the Equal Justice Initiative in Montgomery, Alabama, a legal practice dedicated to defending the impoverished, the falsely convicted, defenseless women and children. The clients of his organization include 14-year-olds tried as adults and sentenced to execution or life without parole; mentally ill or disabled who are sentenced to death; drug addicts with lengthy mandatory prison sentences; and falsely accused people whose only crime has been the color of their skin and their poverty.

The United States, he notes, is unique in the world for the scope of executions and for the number of incarcerations of its citizens. Not only does he provide supporting statistics but an appendix documents cases referenced in the text.

Stevenson is presently a professor at New York University Law School. His work with the disenfranchised becomes vivid narration in Just Mercy, an eloquent example of how the pen is indeed mightier than the sword. Perhaps this book is his best retaliation against those counties and states that continue to deny justice to the most vulnerable citizens among us. And maybe reading this book, and passing it along to a friend, is one way for us to be a part of his work.

The nonfiction bestseller Just Mercy was chosen for Wisconsin Public Radio’s Chapter a Day and for UW-Platteville’s Campus Read.