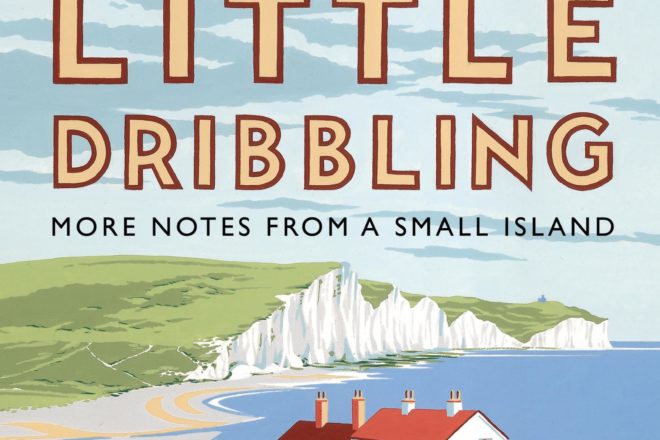 Bill Bryson is a Midwestern writer who loves Britain. Born in Des Moines in 1951, Bryson first visited England when he was only 20. He eventually married an Englishwoman, settled in England, obtained dual citizenship, and launched a successful career as a travel writer. His latest book, The Road to Little Dribbling, begins with a question: What is the longest distance that a tourist in Britain can travel in a straight line?

Bryson studied a map and concluded that such a journey would begin at the seaside town of Bognor Regis and end in Scotland at Cape Wrath. Bryson decided to take a trip along the “Bryson Line” and write a book about his journey. He especially liked the idea of visiting a place named Cape Wrath. Bryson is fond of strange British place names such as Mousehole (pronounced mowz-ull), Irk Valley Junction, Oldham Mumps, Shellow Bowells, and Nether Wallop.

Bryson proposes to guide his readers on a tour of a land with “the most orderly cities, the handsomest provincial towns, the jauntiest seaside resorts, the stateliest homes, the most dreamily-spired, cathedral-rich, castle-strewn, abbey-bedecked, folly-scattered, green-wooded, winding-laned” country that has ever existed on earth. Who could resist such an adventure, if only on paper? The trouble is, however, that Bryson is not the most agreeable traveling companion. To put it bluntly, he is a grouch—unlike Peter Mayle, for example, whose books about France are filled with washed-out driveways, procrastinating carpenters, frozen plumbing, and tipsy houseguests, all of which Mayle faces with calm amusement. Bryson, on the other hand, becomes grumpy or even wrathful at slight provocations. He imagines himself surrounded by idiots, half-wits, imbeciles, and other creatures whose names cannot be printed in a respectable newspaper.

Luckily for Bryson, his wife is a psychiatric nurse, and when he nears the point of explosion, she takes him by the elbow and gently leads him to some quiet place where he can compose himself. But Bryson can take revenge in fantasy. Upon seeing a woman allow her dog to foul a path, he recalls, “I stared at her for a long moment, with something like awe, then raised my walking stick high into the air and calmly beat her to death. When she was quite still, I rolled her ample, Barbour-clad body off the path and into the marshy reeds where it sank with a satisfying glug.”

Fortunately for his readers, Bryson grows more cheerful as his trip continues. He discovers “exquisite” communities such as Tenby – “full of pastel-colored houses, sweet-looking hotels and guesthouses, characterful pubs and cafes, glorious beaches and gorgeous views…I don’t think I passed a house or cottage that I wouldn’t have been happy to own.” Bryson loves shops and pubs, so the town of Ashbourne was made for him: it boasts many inviting businesses, including a cheese shop, a sweet shop, a toy shop, several attractive antique shops, and a sufficient number of pubs. In other places, he finds a cathedral that is “terrific and interesting” and a couple of museums where a browser can wander for three hours and still have treasures yet to see. The Lake District is “about as beautiful as Earth can get” and perfectly suited to Britain’s three favorite outdoor pastimes: “walking, cycling, and sitting in a parked car having a nap.”

It might seem that Bryson is a victim of bipolar disorder, sometimes ecstatic over a pretty pasture, sometimes eager to murder someone. But Bryson has good reason to be grumpy at times, especially when he discovers that some beloved place has been destroyed or changed beyond recognition. He rides a bus from Bognor Regis to Brighton, expecting to see charming seaside villages, but instead the bus passes nothing except “box stores, gas stations, car dealerships, and all the other vital ugliness of our age.” He visits a favorite museum where he used to take his children and finds that it is being turned, slowly but surely, into a food court. He travels to Virginia Water, a village where the main road was once a place of charming, quirky houses and lush gardens. “Those houses are nearly all gone now,” Bryson notes, “bought for a fortune only to be torn down and replaced by much larger homes in a style that might be called Russian Gangster.” Perhaps the saddest place of all is a sanitarium where the inmates were once allowed to work on the grounds crew and even to wander into town, where they held conversations with empty air but harmed no one and disturbed nothing.

Today the sanitarium has been turned into an upscale apartment house. The inmates were locked up in a hospital, where “in no time at all most of them had sunk into a permanent torpor from which none of them ever stirred and no one had time to rouse them.” Looking back on a more civilized time than the present, Bryson confesses, “This is the Britain I came to. I wish it could be that place again.”

Because he loves villages and shops so much, Bryson might enjoy a visit to Door County, even though he would probably find something to grumble about. He might even cause a number of imaginary wrecks on Highway 42. But one of his complaints should be of particular interest to everyone during the most recent campaign season: “I would submit that if you think the only people you should have in your country are the people you produce yourselves, you are an idiot.”