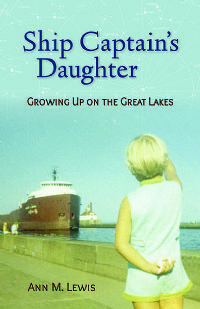 The jacket of Ann Lewis’ memoir Ship Captain’s Daughter features a photograph of a little girl standing on a dock waving at a Great Lakes cargo ship, an appropriate image to capture the life of a daughter whose father, Willis Michler, each year spent the season from early spring through late fall sailing on a giant freighter.

Michler grew up in Superior, Wisconsin, and sailed the Great Lakes for 47 years, and for 21 of those years, captained 13 different ships. Young Willis had considered a career as a pianist when he was a boy, but he was drawn to the big ships as a young man and music was relegated to a pastime.

The slim book captures a bit of Americana from the past in this gentle and loving tribute a daughter pays to a man who worked his way up through the ranks on ships to become a captain. For those of us who have been landlocked, sailing on freighters seems an exotic way of life.

Lewis’ story of a childhood on the Great Lakes came about not only from conversations with her father but from voyages that she traveled with him as well. Her life followed a rhythm particular to seafaring families. During the winter when the lakes were frozen, her family life in Duluth, Minnesota, was conventional. But during the shipping season when the ice on Lake Superior had thawed, she only saw her father on occasions that became special.

When her father’s ore ship sometimes docked in the Twin Ports of Duluth and Superior, he would visit his family. Once for a visit Ann and her mother drove to Sandusky, Ohio, where her father’s ship was tied up by a steelworkers’ strike. And when Ann was 12, she was allowed to occasionally accompany her father on summer voyages; a ship captain was allotted a number of days each season when a family member could travel with him.

The memoir includes the excitement of her family at the end of the season when Michler came home for Christmas, the novelty of a sailor’s routine on an ore freighter, and the harrowing experience of sailing during threatening weather.

During a particularly violent storm, Michler directed his ship for refuge into Lake Superior’s Batchawana Bay. He managed to save the vessel, but the episode so terrified the crew that when the ship docked in Duluth, all the sailors quit, with the exception of the officers.

Lewis’ memoir is personalized by a generous selection of family photos that document her father’s shipping career. Incidentally, the little girl pictured on the cover of the book is Ann Lewis’ daughter, four-year-old Amy. She was watching her grandfather’s ship, the SS Herbert C. Jackson, as it entered the Duluth canal.