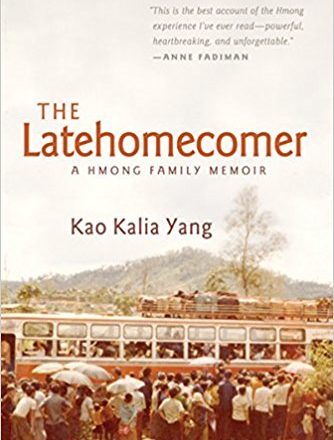 When Kao Kalia Yang was very young, her father explained to her how children come into the world. “Before babies are born,” he said, “they live in the sky where they race along with the clouds and can see everything – the beauty of the mountains, the courses of streams, the dirt of the paths that people take down on earth.” The babies decide to be born only when they find people “who make the earth look more inviting than the sky.”  Yang loved the idea that even before her life on earth began, she had the power to choose her own destiny.

Yang is Hmong, an ethnic group that lived in China for hundreds, perhaps thousands, of years until they were forced to flee during a period of unrest. They resettled in the mountains of Laos, where they remained for almost 200 years. Yang’s mother was a bright girl who dreamed of becoming a nurse and marrying an educated man. Her father dreamed of a small farm and chickens – plump, fluffy chickens clustering and squawking around his feet. The dreams of both parents were blown to dust by the Vietnam War.

Kao Kalia Yang’s book The Latehomecomer is a record of her family’s escape from flying bullets in Laos to temporary safety in Thailand and finally to a home of sorts in Minnesota. Latehomecomer includes vividly detailed accounts of events that occurred before she was born; evidently she relied on stories told by her parents and especially by her widowed  grandmother, who was the rock of her large extended family. “Grandma” was a healer and a shaman. She spent much of her time searching the hillsides for medicinal herbs and walking from village to village to perform healing rituals for the sick of body and the sick of heart. In this way she managed to support her nine children.

During the Vietnam War, many of the Hmong men fought beside the Americans. When the war was over, the Americans suddenly left, and the North Vietnamese and the Pathet Lao soldiers set out to kill all of the rebels. The Hmong were forced to run for their lives into the jungle, where they camped for four years, constructing simple shelters and foraging for food. Yang’s parents met and married in the jungle. All too soon Hmong were on the run again. For a time the women and children were captured and held prisoner in an occupied village that had been ravaged by chemical warfare. In this place of tombstones and scorched grass, Yang’s older sister Dawb was born.

The only possible escape from Laos was to cross the Mekong River, a difficult undertaking for mountain people who had never learned to swim. Yang’s father had no money to purchase a raft, so he tied his small family together – mother, wife and infant daughter – and miraculously managed to ford the river and pull them up on the shores of Thailand. Later they learned that if they had waited until two months later to cross, they would have been slaughtered. The Thais had decided they had no more room for refugees and that the best way to handle the new arrivals was to kill them.

Yang’s people were eventually settled in the Ban Vinai refugee camp, a windy and dusty place where she was born 17 months later. Yang remembers happy times at Ban Vinai:  “the tall grass waving on the hills, me riding on the back of a wide, brown buffalo, almost toppling into a rushing stream, saved by an older cousin; me standing on tiptoes to peek at a litter of puppies, their eyes still closed, their heads searching, disoriented by the light of my bright world.” Normal life resumed, after a fashion. her grandmother had a shop where she sold food and medicines, and she was happy. Yang was surrounded by people who loved her, and life was reasonably good.

But Ban Vinai was no land of promise. Word came that Thai officials were going to close down the camps and send the Hmong back to Laos – a death sentence. Only one refuge remained:  America.

Yang’s grandmother all but refused to go, and Yang worried about the food. She had heard that Americans eat nothing but chicken sandwiches. The family settled in Minnesota, but life in America was disappointing. Her father asked for a job but was given welfare. The family finally bought a house that was cute on the outside but moldy and rotten on the inside. “America was supposed to be for all of us,” Yang wrote, “only we were lonely, lost, and struggling every day at a life that constantly looked to the future for happiness.” She found it impossible to speak English, but she at least learned to write English well – a necessary skill to win admission to a college.

Some critics may question the accuracy of Yang’s youthful memories, especially when she describes her encounters with ghosts. But to read this book is to learn what it means to be a refugee and an immigrant. They are fathers, mothers, infants, children, grandparents – brave and honorable people who are worthy of respect and love.