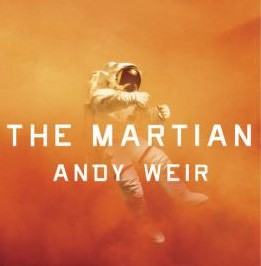 Daniel Defoe’s story of Robinson Crusoe (1719) has endured for nearly 300 years in large part because the fictional adventure appeals to the primal fantasy shared by men in particular: a solitary survival far from the sustaining comfort of civilization through wits and endurance. “Could I put to use those skills I supposedly learned as a Boy Scout?” a man asks himself, imagining foraging for nuts and berries, starting a fire without matches, noting the mossy north side of a tree for orientation.

The basic story has been told again and again, whether our hero is a hiker lost in the wilderness, a soldier behind enemy lines, or, in the case of Andy Weir’s solitary hero, the astronaut Mark Watney in The Martian, abandonment on Mars.

The Martian is set in the relatively near future when manned space flights to Mars have taken place. Mark Watney, a member of the Ares 3 mission to Mars, was abandoned on Mars when a violent dust storm forced the crew to abort the exploration. After seeing Watney stabbed by an antennae, they believed the wound fatal and reluctantly left him behind.

Not until the ship is well on its way was the error discovered. Luckily the present and previous explorations have left behind equipment and supplies that Watney can put to use, much like Crusoe with the abandoned ship beached near his island, but unfortunately the astronaut doesn’t have an adequate food supply to sustain him until a rescue craft can arrive, and unlike Crusoe, water and oxygen are not readily available but are created by intricate mechanisms that must be maintained to continue living.

Ray Bradbury in his classic collection of science fiction short stories The Martian Chronicles (1950) often resorted to figurative language as a substitute for imaginatively creating plausibly detailed descriptions of complicated technology. Weir, on the other hand, not only has the advantage of information gained from being a child of the space age, but according to his biography was hired as a programmer for a national laboratory at age 15 and works as a software engineer. He is a self-described “space nerd” with hobbies that include relativistic physics, orbital mechanics, and the history of manned space flight.

Weir comes to this, his first novel, fully armed to write science fiction. In fact, some readers may feel that his arsenal is stocked for overkill. Fellow “space nerds” will enjoy the technological details; others, like this reader, will keep in mind that no exam follows the book reading and subsequently should not fret about esoteric science as the plot will nonetheless be satisfying.

While The Martian will especially appeal to male readers, a female librarian of my acquaintance lavishly praised the novel. Coincidentally, as a nod to gender equality, the six-man crew has a female commander and another woman on the crew.

And so the iconic Robinson Crusoe is alive and well, even if he has exchanged his George the First era tattered clothing for an EVA (extravehicular activity) space suit.