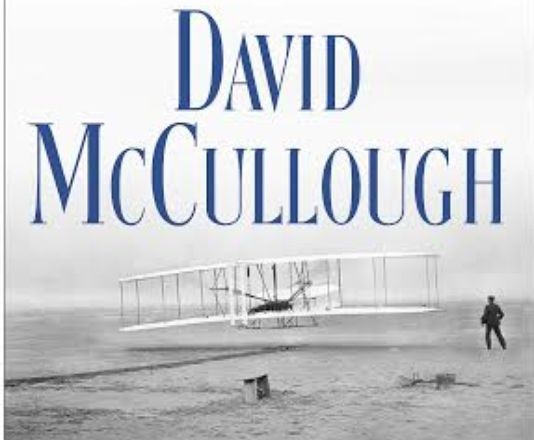 David McCullough is one of the nation’s most honored historians, but he may have outdone himself with his recent bestseller, The Wright Brothers. The excellence of this book is partly due to the wealth of available source material.

The members of the Wright family were prolific letter-writers and their correspondence is housed in the Library of Congress — more than one thousand family letters, along with large scrapbooks, diaries and more. From this treasure trove McCullough has distilled a captivating account of two brave inventors and the family that nurtured them.

The father of this family was Milton Wright, a widower and a bishop in a progressive Protestant denomination known as the United Brethren Church in Christ. (McCullough refers to the elder Wright as “the Bishop,” probably to avoid confusion.) The Bishop lived in Dayton, Ohio, with Wilbur, Orville and their sister Katharine, who taught Latin at a local high school and reportedly flunked a number of boys who grew to be community leaders.

The Wrights had little money for luxuries but they were a loving if somewhat temperamental family. Katharine could have “wrathy” spells; and although the brothers were almost inseparable, they enjoyed a rousing argument now and then. Their father had an excellent library, and he encouraged his children to read and to think for themselves.

Although McCullough is reluctant to apply the word “genius” to Wilbur, he makes it clear that Wilbur was an almost constant thinker and a great reader. Orville, on the other hand, was the skilled mechanic and the entrepreneur. At the age of 10 he began making kites and selling them. When he was in high school, he started a print shop in the family’s carriage shed, using a printing press that he had made himself out of a buggy spring, some scrap metal, and a tombstone. Years later, as the cook at Kitty Hawk, he made himself a stove out of a metal barrel.

The brothers’ first joint venture was a modestly successful shop where they sold, repaired and designed bicycles. But they found their mission when Wilbur called Orville’s attention to a book about the famous aeronautics enthusiast Otto Lilienthal, who designed gliders and made numerous flights before he died in a crash in 1896. The brothers had been intrigued by flying machines since childhood, when their father gave them a toy helicopter that was powered by rubber bands. But now they began reading everything they could find about aviation.

In 1900 they packed their first glider and traveled to the seaside village of Kitty Hawk, North Carolina, which offered privacy, sand for soft landings, and steady winds (“No bird soars in a calm,” Wilbur would write). Apparently the Wrights were untroubled by the skepticism and ridicule they received in abundant measure.

The brothers had never traveled further from home than Chicago, and tent camping on a beach was a new experience. On some windy nights they had to spring from their bunks and hold their tent down. When they ventured outside, bursts of sand blew in their faces. Their rations consisted mostly of eggs, tomatoes and biscuits. Nevertheless, they had a wonderful time. The views from their tent were breathtaking, the citizens of Kitty Hawk were friendly and helpful, and the Wrights’ glider worked as expected. Orville later said that those days at Kitty Hawk were the happiest of his life.

The Wrights made three more trips to North Carolina. They came to love Kitty Hawk, but they suffered considerable misery there, especially during the summer of 1901 when they were attacked by thick swarms of ravenous mosquitoes. Their only escape was to burrow deeply into blankets with only their noses sticking out, but the summer heat caused them to perspire profusely. Other tribulations included a long rainy spell, a nasty cold virus, a treacherous new glider that failed to work properly, and an unpleasant assistant named Edward Huffaker, who constantly preached the value of “character building” as opposed to hard work. He spent so much energy building his own character that he had no energy left to wash the dishes. Things were more peaceful the next year, except on the day when Orville tried to shoot a pesky mouse. “The mark of the bullet is in the corner right back of where he stood,” Orville wrote, “nevertheless the little beastie turned around and calmly walked away and I in my astonishment just stood there and watched him go.”

Then came the day of Dec. 17, 1903, when Orville took a motorized glider—the first airplane—on a wobbly, 12-second flight, but a flight nevertheless, the first in history. The brothers made three more flights that day then took a four-mile walk to the weather station to send a telegram to the Bishop. (But first they washed the dishes.)

There would be many more flights and adventures for the Wright family, including Wilber’s demonstrations in France, which finally silenced the remaining mockers and skeptics, and made headlines around the world, from WRIGHT FLEW in Le Matin to WRIGHT BY FLIGHT PROVES HIS MIGHT in the Chicago Tribune. Soon Wilber could listen to a popular French song, “Il Vole” (“He Flies”).

McCullough notes that several days before Orville’s first flight, an inventor named Langley failed to launch his giant “aerodrome,” which flew straight up and then fell straight down into the Potomac. The aerodrome had been subsidized with $50,000 of public money and $20,000 in contributions. The Wright brothers had refused all offers of money. Their project had cost less than a thousand dollars, which they paid with earnings from their bicycle shop.

It would be easy to moralize upon the story of the Wright brothers, but McCullough resists that temptation, letting the facts speak for themselves. Or he lets the Wrights speak for themselves, as in this memorable statement signed by both of them in 1906: “The best dividends on the labor invested have invariably come from seeking more knowledge rather than more power.”