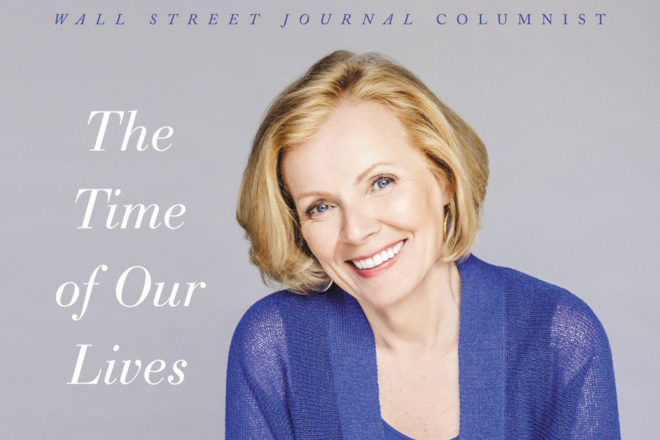 By today’s standards, Peggy Noonan was a neglected child. Born in Brooklyn into a large and tempestuous family, she was packed off every summer to stay on Long Island with her two great aunts, immigrants from Ireland. They lived on a barren plain in a small house that was without air conditioning, telephone service, or neighbors. Aunt Etty disliked children and preferred to speak in Gaelic. The other aunt, Jane Jane, was an amateur mystic who tried to soothe her great-niece to sleep by telling her about the warning signs of immanent death. Still, Jane Jane did her best to be a good surrogate mother. The sisters owned no car and couldn’t drive, but once a week, Jane Jane and Peggy would hitchhike to a nearby town to browse in the stores, drink Coca-Cola, and revel in the air-conditioned buildings. On one memorable trip they rode in the cab of a diesel truck, “squished in” with the driver and a large dog; on other occasions they rattled around in the backs of pickup trucks. Decades later, after Noonan told her adult son about these childhood adventures, she added in amazement, “And nobody killed us.”

Indeed, the America of the 1950s and early ‘60s was a place of innocence and optimism where young Peggy could feel safe, whether she was walking alone in the woods or riding in a stranger’s truck. Television dramas were like the classic fairy tales: they held out the possibility of a happy adult life. Sophisticated Europeans might laugh at America’s babyish ways, but Noonan believes that American culture saved her from her troubled family environment and allowed her to grow into a strong woman who would write speeches for President Ronald Reagan, publish numerous books and articles, and become a weekly columnist for the Wall Street Journal.

Her most recent book, The Time of Our Lives, is a collection of deftly-phrased essays and columns written between 1981 and 2014, touching upon everything from Princess Diana’s wedding to Obama’s healthcare plan. As her résumé might suggest, Noonan is politically conservative. She is unimpressed by Obama, and she describes Bill Clinton as America’s answer to Caligula: “Caligula made his horse a senator; Mr. Clinton made his whoring a centerpiece.” As for Hillary Clinton, the voters are justified in viewing her as “dark, dissembling, thuggish.” But no one is safe from Noonan’s scorn, not even conservative politicians. She writes scathing essays about Mitt Romney and George W. Bush; she shows sympathy for George H. W. Bush, but reserves her unqualified approval for Ronald Reagan, with whom she worked closely, and Harry Truman, the subject of an appealing essay titled “Politics in the Modest Age.”

There is more to The Time of Our Lives than politics, however, and readers of all political persuasions may be charmed by the essay “American Diversity and the Wild West,” in which Noonan travels far from her comfort zone to Wyoming, rides an Appaloosa named Grumpy, and imagines bears and rattlesnakes behind every bush. “America’s First Lady” will please any reader who cherishes the memory of Jacqueline Kennedy. And “The View from Gate 14” describes the humiliations inflicted upon passengers at airports: “All the frisking, beeping and patting down is demoralizing to our society…We are a nation of Willy Lomans, dragging our rollies through acres of airport, going through life with a suitcase and a slack jaw, trying to get home after a long day of meetings, of moving product.”

The Time of Our Lives is filled with treasure, but it might be a poor choice for a reader who tends toward depression. For Noonan, America is “the great and fabled nation that is still, this day, the hope of the world,” but life in the fabled nation has deteriorated tragically since Noonan’s childhood. American television, once a comforting presence, has become a “sick circus” and a “Victoria Falls of dirty water.” President Kennedy had to face the Cuban missile crisis, but today “there are a million little Cubas, a new Cuba every week.” Noonan’s metaphor for the United States is a trolley off the tracks, hurtling forward while its wheels fall off. The most depressing chapter is “There Is No Time, There Will Be Time,” in which Noonan and a former government official conclude that the destruction of New York City by terrorists is only a few months away. The reader will be relieved to discover that “There Is No Time” was written in 1998.

A noticeable flaw in Noonan’s book is that she dwells too much on her own shifting moods and complex state of mind. If critics complain about her self-absorption, she derides them as “boring” and asserts, “I think they should be more serious and work harder…instead of typing whatever enters their little noggins and then swanning [sic] about as public personages at symposia.” Noonan also indulges in name-dropping, as when she reveals that she was included, along with Joan Rivers and Walter Cronkite, in a gathering of guests at Steve Forbes’ chateau near the Normandy coast. Taken altogether, The Time of Our Lives is excellent for browsing but difficult to read from cover to cover.