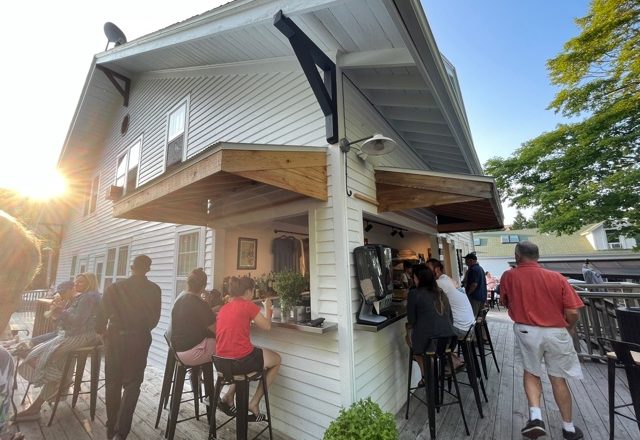 The outdoor bar at Chives, introduced during the pandemic in 2020, has been busy all spring and summer in once quiet Baileys Harbor. Photo by Myles Dannhausen Jr.

Lodging revenues rise 69% through May

It’s not news to anyone in the service industry who experienced their busiest winter in history, with workers in ever-shorter supply, that Door County’s tourism economy reached new off-season heights this year.

Struggling to Keep Up

“If we could book every request out there, we could do enormous numbers,” she said.

As it is, she’s turning down weekday bookings in October because she doesn’t have enough staff. But LaBelle cautioned that the increases of last winter and spring may not be something the industry and municipalities should bank on.

“There is a pent-up desire to travel this year,” she said. “It has brought a lot of people we haven’t seen before. I’m still not seeing a lot of our regulars return yet. But you have to remember that it was just a couple of years ago that we were saying that ‘flat is the new up’ in terms of tourism growth.”

So a return to 2019 levels might be more likely next spring if the COVID-19 pandemic is under control.

Chad Kodanko of Door County Property Management, which manages about 100 vacation-rental properties, said he doesn’t expect the increase to be the new normal, but he admits he’s been wrong before.

“I thought this fall would come back to earth a bit, but we’re already way ahead for September,” he said. “July and August next year are going crazy, but I can’t fathom it staying at these levels.”

At the Holiday Motel in Sturgeon Bay, manager melaniejane said she has barely come up for air this summer.

“I couldn’t really tell you what it’s been like in the city,” she said. “I’m just fighting to keep up cleaning, checking people in and taking bookings.”

This summer she has run the motel with just her mom and one employee. To keep up, she has limited bookings, enacted a two-night-minimum, raised rates and cut breakfast service. Like LaBelle and several other hotel managers reached for this article, melaniejane spoke during the few minutes she could find between cleaning rooms and checking in guests.

“I don’t have the staff for someone to just sit at the desk,” she said. “The easiest path was to just put our heads down and plow through it.”

“Those are times when money is going out the door for overhead and you have nothing coming in,” he said. “So even if we can maintain being up 10% over historical levels at those times, that can be the difference between losing a lot of money and maybe breaking even.”

But Kodanko sees a downside as well. As demand increases, it drives up housing prices for local workers. That makes it harder for him to find people to clean homes or cook food at Husby’s, the restaurant he co-owns in Sister Bay.

“The bad thing is this is going to keep making Door County more exclusive and hard for people like me and the people who work for me to live here,” he said. “It’s great to have the business, but there are so many negative repercussions.”