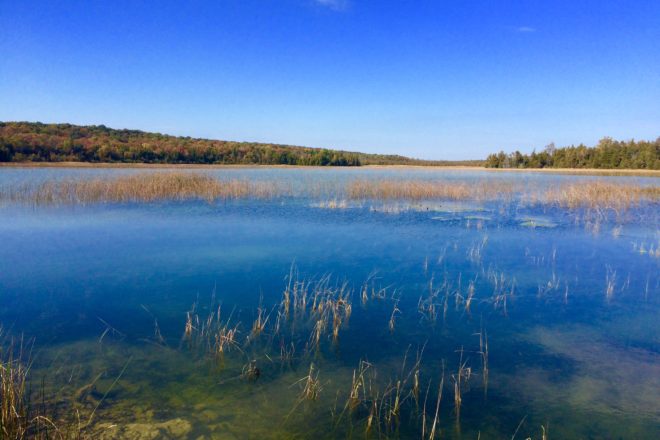 Since the 1990s, both The Nature Conservancy and Door County Land Trust have acquired land and easements to help protect the north end of Kangaroo Lake. Members of both organizations hope the state legislature will boost Knowles-Nelson Stewardship Program funding so that similar acquisitions can continue. Photo by Drew Reinke.

Support continues to grow statewide for a program that uses public funds to protect land and water and to provide for recreational opportunities and responsible forestry, according to a poll released this month.

“The support for conservation funding is at an all-time high,” said Charles Carlin – director of strategic initiatives for Gathering Waters: Wisconsin’s Alliance for Land Trusts – after the Dec. 9 release of polling statistics.

A poll conducted by New Bridge Strategy and FM3 Research showed that 93 percent of respondents said the state should continue to “dedicate public funding for land, water and wildlife conservation in Wisconsin” – a figure that’s up from 91 percent in 2018 and 90 percent in 2015.

“We have been heartened to see that support growing, despite the real and incredible economic impacts of managing for COVID-19,” said Elizabeth Koehler, Wisconsin state director for The Nature Conservancy.

The Knowles-Nelson Stewardship Program – a state funding source for many land-protection and outdoor-development efforts – received a one-year renewal for $33 million in 2020, down from a high of $86 million per year in 2010. In Door County alone, the program has provided more than $28.4 million for land acquisition and protection, as well as municipal-park development and expansion, from 1992 through 2019.

Knowles-Nelson supporters are asking the state legislature for a 10-year commitment for funding. Matt Dallman, director of conservation for The Nature Conservancy, said much work remains to be done to protect drinking water and water quality in rivers and streams.

More than 50 groups – ranging from land trusts and snowmobile and hunting organizations to municipal-government associations – have pleaded with Gov. Tony Evers and the state legislature to boost funding for the Knowles-Nelson Stewardship Program.

In answer to a poll question about whether the state legislature should restore funding to $86 million per year for protection of local land, water and wildlife, 76 percent of the respondents showed support. The poll showed the level of that support at 79 percent among Democrats, 60 percent among Republicans, and 59 percent among those who identified as independents.

Carlin said that in a key portion of the poll, the Newbridge Strategy and FM3 Research pollsters outlined many arguments against continued funding for acquisition of land for protection, as well as arguments for the program, and 78 percent of people polled still showed support.

Twenty percent said they did not support the program when they were read the following statement: “Opponents say that small businesses are closing; many people have lost jobs; and state revenues are down. We have protected hundreds of thousands of acres, and we do not need to preserve more public lands at this time, when we have other important needs like health care and schools. We need to take a time-out from funding this program.”

The pro-funding arguments included: “Here in Wisconsin, outdoor recreation generates nearly $18 billion a year and supports 168,000 jobs. We need to protect our drinking-water sources, support our economy and continue our outdoor tradition for future generations.”

State Rep. Joel Kitchens (R-Sturgeon Bay) said this fall that there is bipartisan support for the Knowles-Nelson program, and he hoped the funding level could be preserved or increased. He said previous opposition to the program came from less-wealthy counties in the Northwoods that cannot afford major losses of property from the tax rolls, but he said the use of funds for conservation easements, rather than acquisitions, has lessened those concerns.

Door County Land Trust is anticipating three more land purchases and the receipt of a land donation before the end of 2020. The three land purchases would add 95 acres to land that it’s protecting in the Gibraltar-Ephraim Swamp area.

Some longtime Door County Land Trust members who wish to remain anonymous have offered a matching donation of $2,500 if the trust can raise $500 each from five new members to support the acquisition of the Gibraltar-Ephraim land – which includes cedar swamp, extraordinary bird habitat, coastal wetlands, and springs and streams, said Cinnamon Rossman, director of charitable giving.

“Even when land is donated, we still have to do a lot of fundraising to cover the associated costs and the long-term management,” Rossman noted. “Altogether, the Land Trust aims to raise $50,000 to complete protection of the three parcels we expect to permanently protect before the end of the year.”

Since the establishment of the Knowles-Nelson Stewardship Program in 1992, $28.4 million worth of projects have been funded in Door County, including the Ahnapee State Trail enhancement, Egg Harbor beach and shoreline development, Sister Bay waterfront development, Sturgeon Bay park expansion and development, restroom construction and expansion of Door County’s Cave Point and Murphy Park holdings, and The Nature Conservancy’s Mink River estuary and buffer-zone acquisitions, plus its various acquisitions at The Ridges Sanctuary.

In Door County alone, through 2019, the program has helped to protect more than 7,800 acres, not including the program’s impact for the Wisconsin Department of Natural Resources, according to totals supplied by Gathering Waters: Wisconsin’s Alliance for Land Trusts.